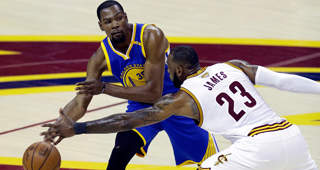 Plot is merely something to hang characters and dialogue off of, and whenever I’m in my torpor-infused hometown I end up driving forty-five minutes each way to the mall and back just to listen to music and watch the grey-green blur of deciduous highway-side trees pass, but art and life and sports, especially, are improved by having an ostensible point. Even if everything is, strictly speaking, a waste of time, we like to think we’re headed someplace of consequence, and we’re pretty good at lying to ourselves about it, so the destination doesn’t need to be well-rendered so much as faintly plausible and interesting. The lottery’s a solid racket for a reason.

It would be melodramatic to posit the Golden State Warriors as an obliterative force, primarily because we’re talking about guys tossing an orange ball around, but also because the NBA isn’t about who’s going to win the title in any given season. It’s too thick and diffuse a text to brook so narrow a reading, and the bulk of the fun of thirty teams playing eighty-two contests each is you can go weeks without paying much attention to the top of the standings, to the Shakespeare via Mike Judge office drama of a coach losing his grip on a squad or the obscure miracle of a young big man sussing out where to stand on defense. There’s a lot of stuff happening entirely apart from the title hunt, as if in a different league with lower stakes and teams with elusive aims like building cohesion and refining their crunchtime chops. The Milwaukee Bucks will be on vacation by June, but they are blessedly entertaining.

If this medium-throttle basketball goes down about as smoothly as bajillion-point font History In The Making, it is more work to wring meaning from it. The game’s minutiae can be engrossing, but sometimes it is only itself—Nic Batum converting an open jumper on a Tuesday night against the Hawks, cutting the lead to seven, for no reason and to very few people’s delight—which necessitates the industry of embellishment we erect around it: granular analysis, context-agnostic meditations on style, statistical exegeses, and trade checker fan fic. This is fine as far as it goes, until the moment you can smell the discourse’s sweat—somebody’s getting a little too excited about flare screens, the Knicks’ backup point guard situation takes on an unsettling importance—and the whole nattering hive becomes legible as a meta-commentary on living as mostly distraction and wearily plumbing the depths of the unremarkable in search of the profound. (Cue Camus-tinged anti-takes that stare down the futility of it all, which coincidentally don’t do great traffic.) This is the mental-emotional tinnitus we try to use sports to get away from.

What the Warriors create is an NBA drenched in this ennui. The league doesn’t lack intrigue altogether, but it’s rendered second-class by the Golden State’s unimpeachable greatness. We’re further beaten down by the knowledge that this could go on for a while. Steph Curry is only 29. Klay Thompson’s deal is up in two years and Draymond Green is signed through 2020. Kevin Durant could get disenchanted and walk whenever, but it’s unlikely he will anytime soon. So long as those four stars are under contract and able, there’s no struggle for them. They’ll win everything they care to. The only point they could make that they haven’t already is an aesthetic one—some peculiar scheme or innovation, their Seven Seconds or Less—and neither Steve Kerr nor Durant are high-minded enough to bother with that kind of thing. They’ll just take the rings, thanks.

Which is eminently reasonable, but then all we’re left with is an ornery juggernaut primping itself on the mountaintop. The Warriors are like if Exxon-Mobil wasn’t evil, or the moon seemed mildly annoyed to be controlling the tides. Durant’s put-on curmudgeonliness is Kobe without the strange elan and Jordan grumbling into a text box instead of a poker hand. Curry has succumbed to the apparently devastating immiserating effect of not being everyone’s favorite player indefinitely. Draymond is provocative like a car alarm. Few athletes this side of Kareem have fascinating and many-layered public personas, but the Warriors have settled collectively on Princely Sourpuss. It could use some punch-up.

So on the surface we’re in for a season with a foreordained victor, and beneath that, there will be a swirl of welterweight unpredictability: growth and faltering and collapse and renewal and Stan Van Gundy getting too real in a few post-game pressers. This is as ponderous as the league gets, but it bears mentioning that it’s never not an overwhelmingly ponderous exercise. This is part of its charm. Plenty of terrific books and movies don’t have much story to them, I kind of like driving to the mall and back out of boredom, and I’ll happily watch John Wall fail to carry the Washington Wizards to ultimate glory. If he’s doing it against the Celtics or the Cavs, I might make it appointment television. The Warriors will take what they want, and they’re entitled to it. What’s left over won’t be everything we asked for, but there will be an excess of material. We’ll make of it what we can like always.