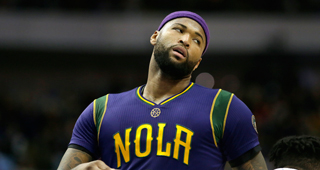 In Kevin Arnovitz’s lengthy examination of the mutually toxic relationship between the Sacramento Kings and DeMarcus Cousins, the temperamental star reflects on a January 2015 film session in which he screamed at interim head coach Ty Corbin and stormed out of the room: I feel bad for Ty Corbin… He’s a great guy who was put in the worst possible situation—the worst. On first gloss, Cousins is talking about how Corbin took over for Mike Malone—the only coach Boogie has totally clicked with in his seven-year NBA career—at a moment when the Kings seemed to be turning a corner and bore the brunt of a fed-up squad’s resentment toward a fickle and hapless front office, but if you read that quote again, the worst possible situation can mean two things at once: it’s the unhappy predicament the team was in and it’s Boogie describing himself. In the same paragraph, he admits he was in a bad place at the time. He helped put everyone else there, too.

The subhed of Arnovitz’s piece reads is DeMarcus Cousins undoing Sacramento, or is Sacramento undoing Cousins? Predictably, Arnovitz doesn’t get to the bottom of this so much as delineate both parties’ various dysfunctions. It’s a question that’s impossible to answer because there’s ample blame to spread around. Boogie and the Kings undid each other. But that’s not the same thing as Sacramento and their discontented center being equally culpable. Ownership—first the swingin’ doofus Maloof brothers, then self-regarding tech billionaire Vivek Ranadive—was responsible for a disaster-struck organizational infrastructure that would have doomed the franchise to failure even if Boogie had been a model professional. They were ultimately responsible for the dense coaches and incompetent front office staffers and draft busts and harebrained trades and puzzling free agent signings. Cousins was difficult—moody, noncommittal, in and out of shape—but he was also good for twenty-three and eleven most nights. The Maloofs and Ranadive were just flat-out terrible at their considerably more consequential jobs.

So what can be said about Boogie now that he and the Kings have split? The good stats/bad team label he’s been marked with is useful when applied to some players—it speaks to the faintly illusory quality of their talent, or some flaw in their makeup; see: Stephon Marbury or Kevin Martin—but it doesn’t seem entirely fair to Cousins to render him responsible for the bad team part. He didn’t choose the Kings. He was drafted by them, then signed a big-money extension while staring down restricted free agency, just as nearly every successful young player does. What was he supposed to do to drag Sacramento out of the basement during his time there? It’s not his fault management confused Rudy Gay with Carmelo Anthony, or that Vlade Divac didn’t understand the value of a top-ten pick.

Yet there is something worrisome about Boogie. The NBA isn’t nearly as parochial as the NFL. There are a healthy amount of front offices willing to take a chance on headcases and enfant terribles, especially highly skilled ones, but, as Arnovitz’s article points out, Cousins is a non-starter for a lot of franchises. Paul George, Jimmy Butler, Kyrie Irving, and Isaiah Thomas were all traded this summer. Boogie only just arrived in New Orleans and the prospect of he and Anthony Davis doing a modern twin towers act is enticing, but Boogie’s entering a contract year and with the Pelicans having been pretty moribund over the past few years, there’s a decent chance their new acquisition could walk next offseason. Given the situation, you would imagine the Pels would be listening to offers, but there’s been virtually no buzz about Cousins moving, presumably because interest is low despite all that Boogie can do on the court. He can score dependably in the post and from mid-range and has recently worked a three-pointer into his game. He’s one of the best passers in the league for a big man and one of the best rebounders period. He’s even a solid defender when he wants to be. But he still makes coaches and general managers nervous.

Maybe the bosses are right to fear Boogie. The problem with being stigmatized as more trouble than you’re worth is that it seems like the truth until you prove definitively that it isn’t. It took Zach Randolph eight years and three fraught exits before he landed in Memphis, where he experienced some personal growth and began to make sense as an important part of a winning team. Once he was slotted next to Marc Gasol and sinking pudgily smooth baseline ten-footers in playoff games, Z-Bo’s foibles became charming and his past transgressions—which include, not a little terrifyingly, an alleged incident in which he choked a stripper—were retconned into a broader redemption arc. Had Randolph and the Grizz not found each other, he could have easily washed out of the league by his early thirties and been understood by history as a constantly overweight hunk of wasted potential. The Z-Bo we know now would never have existed.

We have a need to categorize players—this guy’s a flop; this guy’s a franchise player; this guy’s empty calories—that often outpaces the available data. You can see this most prominently in rookie report cards and evaluations of drafts that happened less than two years ago. But we also sometimes rush to judgment on players who have been around for quite a while. Kyrie Irving was a prolific loser for four seasons in Cleveland before LeBron James returned. Kevin Garnett wasn’t properly appreciated until he joined Paul Pierce and Ray Allen on the Celtics. DeMarcus Cousins has his issues, but he’s also never had a proper chance to exculpate himself from all the derision lobbed his way. You can only accomplish so much alongside a roster populated by seventh men and lottery misfires.

You could call Boogie salvageable, or you could, perhaps more honestly, call him hypothetical, even at age twenty-seven. We only sort of know what he’s capable of. In the popular imagination, he’s already the NBA’s most ignominious star, but the possibility remains that a significant span of time has revealed only some of what he is. Of course, for the latter interpretation to become the dominant one, he will need to find a decent team. Whether the Pelicans are it remains to be seen. It might take another stop or two for Boogie to land in a spot that allows him to develop into his best self. Or he might not ever locate it. Until he does, he’s walking around as the prickly, immensely talented loser two-thirds of the league won’t touch, whether that’s the distinction he deserves or not.