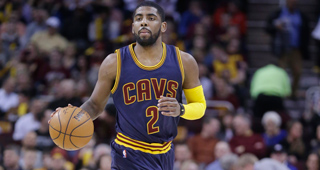 It’s not news to point out that Kyrie Irving admires Kobe Bryant, but if we’re trying to understand one of the league’s most studiously self-constructed stars, it’s about all we have to go on. Kyrie hasn’t yet given a telling quote in his career. A portion of his thank you Instagram post to Cleveland on his way out the door reads: the Ups and downs, we stand and fight no matter what the circumstances are, and that's what being in Cleveland embodies, it is all Love and a whole lotta pride. He’s probably never going to tell us who he is. If we’re intent on figuring it out, we’ll have to read around the edges of everything he purports to be.

It’s maybe important to distinguish admiration from simple affection here. Liking Kobe Bryant isn’t hard to do on a purely watching-a-guy-play-basketball basis. Kobe’s nearly as good as our species can do, in that respect. But there is also everything else: his mid-career unctuousness and late-career truth-teller persona and post-career thinkfluencer brand, his Jordan-aping on-court affectations, this Cinematography Tumblr-style video of him playing “Moonlight Sonata” on piano and the self-produced documentary and the slightly medicated Jaden Smithisms of the Musecage series. (And obviously, the sexual assault allegations. That might trump everything else for you.) Kobe tends to talk about himself like he’s pitching you the new iPhone, and it’s unnerving. There’s a fascinating guy beneath all of the fronting—and the fronting itself can be interesting simply for how strange it sometimes gets—but we only get glimpses of him. Kobe exists primarily as a sentient mass of mythology.

Kyrie thinks all this extra stuff that exists beyond Kobe’s game is rad. He seeks to create his own version of it. He sells himself as a killer like Kobe did. He’s adopted a similar worldly air without doing much work to justify it. He can be charming—those first couple Uncle Drew ads were sort of fun—but more than that, you are always aware of how intensely he is trying to charm you. Lots of athletes care about what people think of them, but not many are so specific about what they want people to think. Kyrie is aiming to be seen as some mix of artist, assassin, and intellectual. He’ll add businessman at some point. It’ll be annoying.

This past summer, he reached the same you can’t talk to me like that anymore point with LeBron that Kobe reached with Shaq in 2004. The two have never gotten along—Kyrie repeatedly yet unconvincingly called LeBron his brother in interviews—but when LeBron returned to Cleveland, Kyrie hadn’t accomplished anything outside of impressing as a supremely stylish player on some dismal and dysfunctional Cavs squads. It was an opportunity to do some high-profile work. Who knows what Kyrie’s plan was at that time. Perhaps his intention was to grow under LeBron and eventually leave for his own team. Or maybe he was gunning for three or four titles. LeBron didn’t seem entirely convinced by Kyrie at the outset either. There were in-game lectures and fits of passive-aggressiveness. You’ll remember that until about midway through their second season together, there was persistent buzz the Cavs were open to at least the possibility of swapping Kyrie out for Chris Paul. Regardless of how LeBron and Kyrie felt about each other, the relationship worked: three Finals trips and one championship. Or anyway, it worked right up until it didn’t.

Toward the end of his prime, Kobe was all about rings. He wanted to get to title number six so he could at least argue for his status as an all-timer by claiming he won as many as Jordan. We watched him struggle with injury as the Lakers squad he helped to three straight Finals appearances began to age and come apart. We saw the Dwight Howard and Steve Nash superteam flop. It was a whit sad to watch Kobe come up short, because he was so obviously breaking himself trying to make it happen. The reason it wasn’t quite tragic: he had already walked away from a good thing as he was entering his prime, demanding that management send Shaq—who had two more pretty productive years left, it turned out—to Miami so he could waste a few of his best seasons clawing to .500 records and playing alongside Smush Parker and Kwame Brown. Kobe didn’t want to win absolutely; he wanted to win on his terms.

Kyrie’s up to something similar, although he’s making a smarter play, partnering with Gordon Hayward, Al Horford, and a Celtics team that’s slightly less than elite but still stocked with talent and a considerable amount of assets that will allow them to improve over the next few seasons. And more pointedly: Hayward and Horford are fine players, but they’re also low-key bros who don’t have much interest in becoming league-defining personalities. We’ll see how thoroughly and effectively Kyrie runs the show in Boston, but he’ll definitely shine brighter than anyone else on the roster.

Ascendance is a tricky term these days, with the Warriors providing a hard ceiling for the rest of the NBA, but if Kyrie and his Celtics aren’t going to have much more than an outside shot at a title for the next little while, this is at least the beginning of Kyrie Irving as his own thing, walking around with the giant trademark attached to his name—that threshold athletes cross where they become objects of public fascinations and ambassadors for all kind of entities, not least of all themselves. This is an odd thing to want, and not everyone as great at basketball as Kyrie seems to want it, or it becomes a somewhat incidental part of what (if not necessarily who) they are, or it’s a byproduct buckraking. For Kyrie, it’s been a bona fide professional goal for a long time now. Finally loosed from LeBron’s shadow, he’s about to achieve it.

This feels worth asking: has Kobe Bryant ever seemed particularly happy? Kyrie apparently sees in him what most of us don’t. Time will tell whether that’s clarity or someone who got hooked by a hard sell.