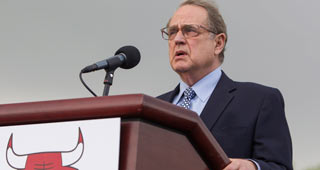 Well, here’s the logical endpoint. It took repeatedly selling out their franchise player to the press while he was rehabbing injuries, running a successful coach out of town because he was getting too much credit, bringing in an apple-cheeked new one who immediately didn’t convince, signing an aging star to a gold watch contract he was owed by another organization, trading two rotation players for a point guard who was sent down to the D-League after two practices, and giving away one of the league’s best forwards for a no-defense wing with a blown ACL, another dubiously NBA-level point guard, and nine spots in the 2017 draft. The Chicago Bulls didn’t hastily dig a grave and trip into it. They spent years constructing a well-appointed mausoleum, took a cyanide pill with their nightcap, and laid themselves to rest.

Oh, and in the liminal state between waking and death, they sold Jordan Bell to the Warriors for $3.5 million, which local journos joked but also kind of seriously asserted, either will or already has been plowed into the only sports team owner Jerry Reinsdorf has ever actually loved: the Chicago White Sox.

It’s one of the league’s more thoroughly chronicled open secrets: Reinsdorf fell ass-backwards into six NBA championships and complained and pinched pennies the whole way. Those are Michael Jordan’s titles. All Reinsdorf did was just barely not anger Jordan enough that he spent the second half of his career scoring thirty-five spiteful points a night in Los Angeles or Phoenix. He did nothing to ameliorate the team’s various dysfunctions and showed more loyalty to mediocre surrogates he could control than to Jordan or Scottie Pippen or Phil Jackson. The Bulls, at their peak, were more like the fraught-yet-thrilling Cavaliers of recent years than the almost frictionlessly great Warriors. The internet would have had fun with them. As it was, Tribune reporter Sam Smith had quite a bit at the time.

Players have always made (and undone) franchises more often than the inverse, but we know from observing—to cite two recent extremes—the Gregg Popovich Era Spurs and the Kings of the past decade that broader organizational structures matter. You can win everything with an all-time talent, a good roster, a coach who isn’t a disaster, and an executive suite filled with egotistical morons, but your odds of making that happen are a lot slimmer than if you have level-headed people helming the whole enterprise.

It’s probably not a coincidence that the Lakers have seemed less invincibly Lakers-like over the past few years as their ownership has destabilized and Jeannie Buss has been quarreling with her less competent brothers for control of the franchise. The Pelicans have been a mess throughout Tom Benson’s tenure as owner in large part because Benson never seemed to want the team in the first place. The NBA sold it to him at a cut rate after struggling to find a buyer for two years. As an indication of how much Benson cares about the Pels, Mickey Loomis, who is also general manager of the Saints, functions as the organization’s head of basketball operations. The franchise has never been looked after well enough to succeed.

Reinsdorf regards the Bulls with a sort of barely interested contempt. Though he’s been enshrined in the Basketball Hall of Fame due to having the privilege of employing some great players, he’s a baseball guy. He enjoyed claiming credit for those six NBA titles in the nineties, but he was elated about the White Sox 2005 World Series victory and as a general rule doesn’t care about the Bulls unless they’re dominant. He allows the franchise to function as a nest of sycophants and company men. John Paxson and Gar Forman—the vice president of basketball operations and general manager, respectively—are demonstrably bad at their jobs, but they have spent a combined thirty-two years in Chicago’s front office. The argument for their continued employment is just that: longevity begets longevity with Reinsdorf. If you do what he says rather than what needs doing, you have a good shot at sticking around.

And Paxson and Forman have stuck around long enough to bridge one miserable period of Bulls history to the next. They were around for the middle of the post-Jordan, pre-Derrick Rose years, when Eddy Curry was fat and depressed and Kirk Hinrich was beginning to construct his loathsome Junkyard Stockton legend, and now they’ve presided over what wasn’t intended to be a teardown but ended up as one. They just finished squabbling with Dwyane Wade over a buyout of a deal he signed a year ago. The roster might be the worst in the league. You could argue that this is a proper bottoming out—there’s nothing more discouraging than a half-hearted tank job—but if that’s the case, it doesn’t make much sense why the Bulls didn’t trade Jimmy Butler in the middle of last season. Or it doesn’t make much sense until you remember that Reinsdorf is all profit motive and wanted some playoff revenue before the team fell off a cliff for a couple years.

It’s tempting to argue that you can’t run a franchise like this and win anything of consequence, but the Bulls themselves are a powerful argument that you totally can. Sports are a lot closer to being meritocracies than just about any other American institution, but they are still far from purely that. The Bulls could soon luck into a transformative lottery talent and go on another league-torching run that Reinsdorf will intermittently tune into and out of. There will always be insufficient justice in this game. But what the Bulls are right now is what they deserve to be. It’s effect catching up with cause. They finally, for who knows how long, reflect their practices.