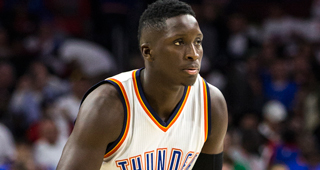 The Bucks under Herb Kohl had the same problem the Pacers do now with Herb Simon: the aging owner who wants the team to be competitive for defensible but also deeply counterproductive reasons. The fans deserve a decent product, protracted rebuilds are alienating, small market franchises can’t survive long winters of futility, etc. It’s a short-sightedness rooted primarily in the generous idea of giving people bang for their buck and not taking their commitment for granted. It’s also heart devouring brain, or old-fashioned sensibilities foundering in a new world. We don’t actually get smarter as the generations turn over—that’s something stupid people say—but we do get savvier and more attuned to what makes the stuff we like tick. We’re no longer interested only in television shows, but also the business that produces them. We consume vein-opening longform interviews with stand-up comics alongside the specials they’ve crafted. This has, in a lot of ways, made us harder to suffer than ever before—hardly anything is allowed to exist simply as itself anymore—but it does occasionally serve us well. We can sniff out conventional wisdom that’s past its sell-by date.

For instance: why the hell does it matter whether or not your trade your best player to a team in the same conference? That’s the question I spat at my computer screen when I learned that the Indiana Pacers had shipped Paul George to the Oklahoma City Thunder for Victor Oladipo and Arvydas Sabonis’s kid. Some anonymous NBA exec called it a salary dump, and that’s a fair characterization. Oladipo was the centerpiece of the trade and there’s a decent chance he’ll be more burden than asset. We’re not sure he’s anything more than an average starting shooting guard and he’s locked in at $21 million per season for the next four seasons. There had to have been a better offer on the table for the Pacers.

Of course there was, but Kevin Pritchard either constrained himself, or Herb Simon instructed him to trade George to the Western Conference no matter what. (The latter seems more likely.) Shortly after the deal with the Thunder was completed, reports trickled out that the Cavs thought they had an agreement with the Pacers that would have sent Kevin Love to Denver, Gary Harris to Indiana, and George to Cleveland. Danny Ainge has a history of exaggerating his offers after the fact, but we can be reasonably certain the Celtics at least made Jae Crowder, Avery Bradley, and a non-Nets first round pick available. Instead, the Pacers turned down reasonable approaches from the pair of Eastern Conference contenders and accepted the peanuts the Thunder were offering.

The theory goes that they did this because the Cavs and Celtics are competition for the Pacers in a way the Thunder aren’t, but in reality, the Pacers might as well be playing a different league than either of those two franchises. With Paul George, Indiana went 42-and-40 last season and got swept by the Cavs in the opening round of the playoffs. Without him, their most productive starter is now Myles Turner, whom Ben Golliver and Rob Mahoney recently ranked as the sixty-eighth best player in the league. The moment it became apparent that George wasn’t going to re-sign with the Pacers, they entered a new era, whether they knew it or not. It made some amount of sense to strive for a playoff spot with a star in the second-to-last year of his contract. Once he made it clear he wanted to leave, the sensible thing to do was get decent value for him, preferably in the form of draft choices and/or a young talent who might break out. Nabbing Oladipo and Domantas Sabonis doesn’t accomplish that aim. The only satisfaction the Pacers can take from George’s exit is that they didn’t help the Cavs or the Celtics, which will be no kind of satisfaction at all unless Oladipo makes a surprise mid-career leap.

Conflating modern with good is a dangerous practice, but by the same token the old ways are worth scrutinizing. You might find that what once seemed like a cosmic law is actually eminently disregardable. Case in point: after losing out on George, the Cavs and Celtics did business with each other this past August. The Celtics provided a landing spot for a discontented Kyrie Irving and the Cavs received a short-term point guard replacement in Isaiah Thomas, a useful wing player in Jae Crowder, and a draft pick that figures to land somewhere in the top five next summer, which they can flip for playoff help this season or hang onto if their project falls apart and they enter a rebuild. Surely, the Cavs weren’t thrilled about sending Irving to a team they’ll probably face in the postseason and the Celtics were wary of extricating the Cavs from a sticky predicament. But the franchises found the help they needed in each other and they’re both better off for accepting that help.

Meanwhile, the Pacers have planted themselves in a no man’s land between being somewhat competitive—on par with, say, the Wizards or the Nuggets—and bottoming out. They’ve adhered too closely to unexamined conventional wisdom. In other words, they’ve been stupidly stubborn, and it’s difficult to see how things get better from here. A good first step would be learning from their mistakes and chucking whatever maps they’ve been consulting. The terrain beneath their feet has changed, and they seem not to know it yet.