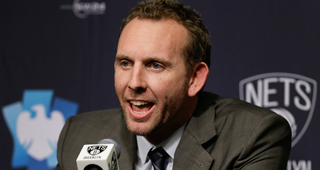 Sean Marks was a smart hire. That was the consensus when the Brooklyn Nets made him their general manager on the day of the trade deadline in 2016. It’s strange how consensus forms around these sorts of things, because few people commenting on the matter know anything significant about the guy who’s getting the job, and even the plugged-in reporters only have a cloud idea how good he’ll be, because being in charge of personnel for an NBA franchise isn’t a gig that’s particularly like anything else. These dudes in suits who aced their interviews: sometimes they have playing careers and sometimes they don’t, but they’re basically mysteries until they get a couple drafts and free agency periods under their belts. Marks had Spurs pedigree and the folks who had spoken to him said he seemed bright. Upon his hiring, his public perception was perhaps helped most of all by the simple fact that he’s not Billy King.

The Nets are still recovering from King’s various screwups. For one more season, they don’t have their first-round pick, which is obviously a problem because they figure to win twenty some-odd games this season and finish in the Eastern Conference basement once again. This might suggest Marks has done a lousy job over his first year-and-a-half as GM, but he hasn’t had much to work with and in fact has done pretty well to turn the Nets into a repository for unwanted contracts. It’s not a haul, exactly, but this summer Marks picked up D’Angelo Russell and the Toronto Raptors’ lottery-protected 2018 first-rounder at the cost of taking on Timofey Mozgov and DeMarre Carroll’s undesirable deals. One imagines Trevor Booker’s $9.1 million expiring contract is available to any cap space-strapped organization that wants to bid for it. Marks has nothing better to do than trawl for medium-grade assets. There’s no point in trying to make the Nets great in the near-term, since that’s an impossible task, and the rebuild can’t begin in earnest until he has a chance to nab a young star or two with some lottery picks.

So he and the Nets are stuck in a holding pattern until at least the summer of 2019, when the franchise once again assumes ownership of its first-rounders. That’s not an inconsiderable amount of time—and the Nets are already entering what’s set to be their third straight dismal season—but it is at least a date for when hope will arrive in Brooklyn. That is, if Mikhail Prokhorov can keep patient for that long. It would be just like the clumsy oligarch to wreck a drawn-out yet necessary process right when the end of the most painful part is becoming visible along the horizon.

Assuming Marks doesn’t get pushed into foolish action, the Nets will soon be in the kind of decent-enough shape any franchise can get itself into if it makes the effort: in other words, operating with a blank slate. There’s a slight chance D’Angelo Russell is one of those high draft picks who requires a change of scenery before living up to his pedigree, but even if he doesn’t pan out, at worst, the Nets will be back to zero for the first time since they shipped out three first-round picks, a first-round pick swap, and a bunch of salary-matched flotsam to the Celtics for Kevin Garnett, Paul Pierce, and Jason Terry in 2013. That it’s taken as much abject basketball as they’ve already played plus two seasons more speaks to the magnitude of the mistake Billy King made four years ago. (He stands by the decision, which is all you need to know about his expertise.) Recency bias might not be getting in the way here: it could truly be the worst trade in NBA history.

Maybe Sean Marks was a smart hire. Even if what he’s mostly doing is biding his time waiting for the aftermath of his predecessor’s incompetence to clear completely, there are good and bad ways of doing that. But you can only praise the guy so much because the work he’s done so far might be broadly inconsequential. Last year, I argued that the Brooklyn Nets weren’t worth thinking about, that doing basically anything else with your time would be more productive and rewarding. That’s harsh, but it’s still basically true. The Nets are two years from starting to turn this thing around.

What Marks has done more than improve the Nets prospects going forward is prove that he knows what he’s doing and is likely to make sound decisions in the future. There’s no guarantee anyone on the roster at this moment will be around when the team is worth a damn, but we’re more sure now than we were when he was hired that Marks has some vision and trade market acumen. Whether he’s genuinely gifted at this is still theoretical, but that’s not his fault: everything about the Nets is theoretical, and it will remain so until the summer of 2019. Bit by bit, they’ll become something we can talk about at length. But right now, they’re still nothingness vaguely threatening to take on a interesting shape.