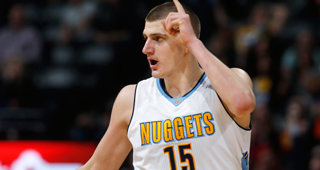 I miss my big, lumbering doofus centers. The back-to-the-basket power forward is nigh completely extinct—if you’re six-foot-nine, you better shoot threes and defend a couple positions—and the Greg Ostertagian five is on his way out as well. The league will probably always have a place for athletic, dirty work-handling seven-footers who can’t extend their range out to the three-point line, but it’s a more athletic breed these days: your Steven Adamses, your Rudy Goberts. These guys are basically gymnasts compared to Timofey Mozgov, whom the Lakers salary-dumped on the Nets over the summer, or to Ian Mahinmi, who has averaged more than six points per game once in his nine-year career. Fading from existence is the prototypical huge dude who seems to be a professional basketball player almost solely by dint of his mass. You have to be able to blitz screen-and-rolls now, and contribute more to the offense than three wobbly baby hooks per game.

Okay, so I don’t aggressively lament these Frankenstein’s monsters in particular losing their NBA viability, but I liked having them around because they provided the beige background against which spry and skilled centers were able to pop. Hakeem Olajuwon was routinely great against David Robinson and Patrick Ewing, but he did some of his most dazzling work embarrassing John Salley- and Eric Leckner-tier stiffs who couldn’t have stopped him if David Stern legalized rugby tackles. Nothing put a finer point on Olajuwon’s alien grace than the way he bamboozled oafish golems.

As recently as 2009, you would look at Marc Gasol and think he was just Pau’s pudgy younger brother, and then you would see him play these inch-perfect bounce passes from the free throw line and orchestrate subtle dribble-handoff moves where he would use his frame and his touch to buy a guard an extra foot or two, and it was thrilling, the ways he subverted the beefy big man genre. It’s still terrific to watch, but we’re used to Marc Gasol by now, and the league has changed such that he’s had to adjust to the new varieties of centers that have sprung up around him just as much as the rest of the league has had to learn how to check a leviathan with Andre Miller’s grasp of the game’s subtleties.

Nikola Jokić isn’t gigantic. He’s listed at six-foot-ten and two hundred fifty pounds, and he doesn’t look like he’d be balletic. His arms have all the definition of a salami drying on a hook and he has that distinctively blank face behind which there doesn’t seem to be much going on. All of that stuff—that’s a school of red herrings, because he sees passing lanes where nearly every other player in the league sees traffic, and he has the footwork to make a defender of his hip disappear like he’s yanking the tablecloth out from under a Thanksgiving spread. My most common response to Jokić, when he fakes a jumper and throws a pass off his fingertips to a cutter for a dunk, is to laugh. When Russ Westbrook barrels into the lane and does some stunt driving on his way to a tricky lay-in, it at least looks the sort of thing Russ Westbrook is built for. Jokić’s outward dopiness makes his elaborate feints and spinning fadeaways even more spectacular than they already are, and a little bit silly. It’s like he’s hustling us right up until the moment he reveals that he’s really, really good at this.

(It helps the effect that, as a delightful throwback flourish, the big Serb is a complete zero on defense. Like, worse than he looks like he would be: slow and some combination of overwhelmed and uninterested. Mike Malone has been talking up Jokić’s improvement on that end of the floor lately. I hope it’s empty preseason optimism, purely for aesthetic reasons.)

Obviously, the league is better off with Jokić facing more talented centers than he would have in 1995, but we have lost something in the modernization of the position, which is the gap between the big men who could actually play basketball and those who couldn’t, and the occasionally jarring ways the talented ones would illustrate that against the oversized riff-raff: dunking over them, sending them stumbling toward empty space, stripping the ball as they went up for a lay-in so mechanical you could practically hear the sound of clanging metal.

But that’s just comedy. Instead we have Jokic whipping pocket passes and tossing no-look lobs against defenses that are way more well-suited to defend it than they would have been even a handful of years ago—and they still can’t, because his vision is that panoramic and his hand-eye coordination is that sharp. He resembles one of those vintage dinosaurs, but Jokić is as modern as any big man this side of Anthony Davis. If you dropped him into Olajuwon’s era, he would have seemed like an impossible player. As it things stand, he still sort of does.