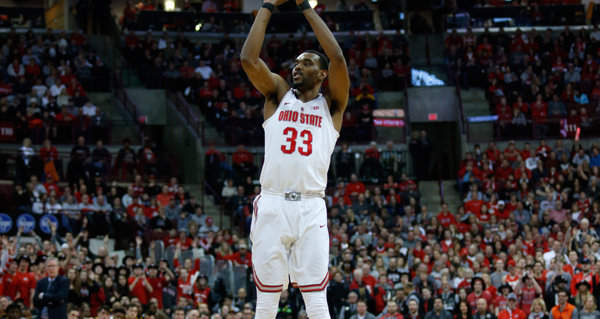 Keita Bates-Diop was the 22nd ranked prospect in the 2014 high school class [1] but struggled to get on the court in his first year at Ohio State, logging just 327 minutes over 33 appearances as a freshman [2].

He did a lot better as a sophomore, earning 1,040 minutes and averaging 14.9 points per 40 minutes [3], but instead of going pro, the six-foot-seven wing opted to return for his junior season, looking to improve his 54.9% true shooting.

Bates-Diop logged only nine games due to a stress fracture and was forced to redshirt that season, though.

He returned for his fourth year and, looking 100% from a physical-standpoint, the 22-year-old [4] has finally lived up to expectations, leading Ohio State to 24 wins in 31 games against the 48th toughest schedule in the country [5].

He’s averaged 23.6 points per 40 minutes on 57.7% true shooting and posted a 27.8 player efficiency rating this season, which has resulted in ESPN currently ranking him 27th on its top 100.

Bates-Diop projects as a combo forward who can space the floor reasonably well and offer some shot creation against switches on offense. That’s how he’s operated at Ohio State this year and figures to be how he’ll be viewed in the pros, though to a lesser extent, as it is impossible to think his 29.1% usage-rate would carry over to the NBA.

On the other end, Bates-Diop seems on the surface like the exact sort of versatile defender every team is looking for these days. He proved himself able to defend smaller players regularly in college, not just switching onto them midway through the shot clock but starting possessions on them and having to track them around full time too.

But given his upright stance, there’s some skepticism over how much of his prolificacy in one-on-one defense will translate against the elite athletes he will be matching up against in the pros.

Posting up is the most advanced part of his skill-set at this point of his development. Ohio State often calls sets to get him isolated in the post against smaller or similarly sized players.

Bates-Diop has a well-distributed 235-pound frame [6] but doesn’t play with a lot of toughness looking to set position for deep catches, as he is regularly pushed further away from the low post.

Once he gets the ball, Bates-Diop has shown to be quite resourceful working out of that area. He doesn’t have power moves and hasn’t shown much in terms of working his man out of position with shot-fakes, head-fakes or spin moves but uses his height and the high release on his jumper to shoot over his defender.

He mostly alternates between quick turnaround jumpers over either shoulder immediately upon catching the ball and a more deliberated approach where he turns, faces his man, sizes him up or jab-steps and rises to shoot over him.

Bates-Diop elevates with good balance, has a reasonably quick trigger out of a standstill, fully elevates himself for a high release and shows decent touch. He’s nailed 44.8% of his 190 two-point jumpers this season, with less than a third of his makes assisted [7].

Bates-Diop has also flashed a move to get a closer look where he backs down his man some, then twists his body around him and attempts a scoop layup off balance. Given his above average length, it can be somewhat effective.

What he hasn’t shown much is a knack for passing out of the post.

Bates-Diop is only a capable open shot shooter at this point of his development.

Ohio State has him drifting to the corners, sprinting to the top of the key off pindown screens and taking quick jumpers after setting ball-screens in the pick-and-pop from time to time but he hasn’t yet shown much dexterity for nailing these more challenging types of shots.

Bates-Diop has a fluid shooting motion off the catch, with a pronounced but quick dip for rhythm. His release is decently quick for someone his size and he fully extends himself to launch the ball from a high point, making it challenging for defenders to closeout to him effectively.

Bates-Diop has nailed an average 35.1% of his 322 three-point shots over his time at Ohio State but has hit 76.7% of his 258 foul shots, suggesting that a more steady diet of spot-up looks instead of being asked to take shots on the move would result in a more comforting percentage for someone who will earn the bulk of his money based on how well he shoots three-pointers.

Bates-Diop profiles as a ‘shoot it-or-move it’ player when he is not in the post.

He is not very smooth putting the ball on the floor out of triple threat position, doesn’t have an explosive first step to blow by his man as he’s scrambling, doesn’t play with any force using his strength to bully his way to the rim and is prone to having the ball stripped in traffic.

Bates-Diop also doesn’t have the side-to-side quickness and hasn’t yet developed the handle, the dribble moves or the court vision to create good offense for himself or others in isolation or out of the pick-and-roll – taking just 23.7% of his shots at the rim, with almost half of his makes there assisted, and assisting on just 10.8% of Ohio State’s scores when he’s been on the floor this season.

Ohio State switches aggressively and Bates-Diop found himself matched up against smaller players late in possessions regularly. They’ve also felt comfortable with him starting possessions on true guards from time to time.

He bends his knees some but is for the most part a bit too upright in his stance defending on the ball. He is also too big to be able to get skinny over ball-screens, imposing on his team a mandatory switch if he’s put in the pick-and-roll.

Out on an island, Bates-Diop did well shuffling his feet side-to-side to stay in front of smaller players, guards with his arms up to try scaring away shots with his length and uses his strength to contain dribble penetration.

As a wing defender, he’s proven himself attentive to his responsibilities rotating inside to pick up the roll man and impressed with his ability to closeout, run more than a few shooters off their shots and stay balanced to keep pace with them as they put the ball on the floor. He’s also used his length to make plays in the passing lanes some, though his average of 1.2 steals per 40 minutes is a bit unimpressive for someone with a rumored seven-foot-four wingspan [8].

His biggest contribution has been on the defensive glass. Bates-Diop is very active chasing the ball off the rim while Kaleb Wesson and Micah Potter do the dirty work, showing fairly impressive quick leaping ability off two feet in a crowd – collecting 25.7% of opponents’ misses when he’s been on the floor this season.

Bates-Diop has also been deployed as the tallest player on five-out lineups every once in a while and as a big defender, he’s shown nice awareness coming off the weak-side in help defense and translated his quick leaping ability into effective challenges at the rim – averaging 1.9 blocks per 40 minutes over his 106 appearances in college.

He’s also proven himself an asset against the pick-and-roll, able to contain ball handlers from turning the corner in drop defense and keep pace with them on straight line drives as they get downhill to challenge shots at the basket.

Where he’s struggled is in areas that demand a little more physicality. Bates-Diop is attentive to his boxout responsibilities but isn’t very tenacious in his attempts to erase his man out of the play. Defending the post, he uses his length well to try walling off the rim but gives up ground somewhat regularly.

Nonetheless, his overall impact was tremendous. Bates-Diop had the best defensive rating on a team [9] that ranks 13th in the country in adjusted defensive efficiency [10].

[2] According to our stats’ database

[5] According to Ken Pomeroy

[6] According to Ohio State

[8] According to Draft Express

[9] According to our stats’ database

[10] According to Ken Pomeroy