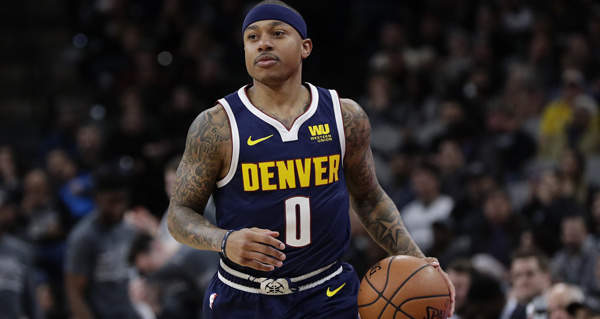 Let’s start here: $27 million is more than enough money. That’s the amount Isaiah Thomas was paid from 2014 through 2018. If that’s not quite generational wealth, it’s way more than any one person needs in a lifetime. It’s also something like $100 million fewer than Thomas deserves. When we talk about the contract figures of professional athletes, we’re usually having a conversation that’s slightly abstracted. The actual cash involved is not the most important thing; it’s what the number represents and whether or not it’s roughly aligned with a player’s quality. It’s a conversation about fairness, who deserves which size slice of the pie, regardless of how big the entire pie actually is. Sometimes, more high-mindedly, it’s an examination of what capital-L Labor deserves in return for all the value they produce. (In the mind of this commie: basically everything.) But $27 million is plenty. Thomas is fine. His pride is bruised, but he can afford to get that looked at.

With that said, man has he ever gotten hosed. He was drafted by the Kings with the final pick in the 2011 draft and played for less than a million bucks a year for three pretty good seasons in Sacramento, averaging 15.3 points and just under five assists per game over that span. Then he joined the Phoenix Suns via a sign-and-trade on the $27 million deal that proved to be wildly out of whack with his ability. The stint with the Suns didn’t work out, in large part because they had three starting-caliber point guards on the roster, but once Thomas was sent to the Celtics midway through the 2014-15 season, he began to soar. At his peak, in 2016-17, he was a fringe MVP contender, putting up 29 and 6 every night with astounding efficiency, and taking over games in the fourth quarter for a young Boston squad that desperately wanted to get out of the way and let a genius cook.

That beautiful season ended terribly for Thomas, not because the Celtics got annihilated by the Cavs in the Eastern Conference Finals, but because he was playing through both grief and injury. In March, he hurt his hip in a game against the Timberwolves, further aggravated it in the second round against the Hawks, and didn’t play the final two games against the Cavs after getting roughed up by a Kevin Love screen. Worse than that, his sister had died in a traffic accident just before the playoffs started. Thomas endured all of this until he simply couldn’t anymore. He ran himself into the ground because he wouldn’t ever consider doing otherwise. He’s five-foot-nine, and maybe shorter, but as tough as they come.

The Celtics rewarded him by trading him away for Kyrie Irving. Danny Ainge never wanted to pay him a second contract anyway. Cleveland was a disaster. Following hip surgery and a long injury layoff, Thomas was clearly diminished, and LeBron James hated playing with him. The Cavs shipped him to Los Angeles in a cap-clearing move for the Lakers, and it’s lost to history what happened to Thomas after that. Some say he shot 38 percent from the field for a 35-win team, but who really knows.

Which, if we omit the portion of the Nuggets season Thomas has spent sitting on the bench in a suit jacket, brings us right about up to now. He’s on a one-year prove-it deal in which he hasn’t proven much, and he currently appears to be falling out of the Denver rotation as they gear up for the playoffs. This is not really anybody’s fault. The Nuggets were honest with Thomas last summer about how they were taking a flier on him. Thomas is trying his best, but he’s a shell of his former self. Mike Malone has to do whatever helps his basketball team ahead of what he hopes will be a deep postseason run. It’s good faith all the way around, and it all still kind of sucks. Isaiah Thomas is 29. He’s never been properly paid. It wouldn’t surprise anyone if he’s out of the league in a year or two.

This is not a tragedy, but it is a bummer. Maybe as far as it goes is you feel bad for Isaiah Thomas and then rarely think about him again once he’s playing in China or buying up car dealerships. But the relationship between fan and player is not as simple as rooting interests or a bodily sympathy. Athletes, in demonstrating the outer limits of what’s physically possible, stimulate our imaginations in much the same way great directors or musicians do, and we’re grateful for that. We want them to do well; we want them to get paid what they’re owed because we want them to feel fulfilled. That only seems fair.

That’s not going to happen for Isaiah Thomas, who was a comet at the exact wrong point in his career. At the edge of NBA relevance, all he can do now is fight like hell to hold down a job. He’ll keep doing that until nobody wants him anymore, because that’s his relentless spirit. And he’ll forever be aggrieved about what he didn’t get. He’ll still be okay; he’s taken care of. That doesn’t mean he’s not right to be bitter.