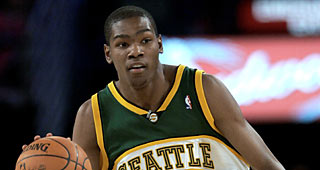 The Sonics had already spent the 2007-08 season in the bardo. Two days after the start of it, Clay Bennett and his associates officially announced their intention to relocate the franchise to Oklahoma City. A vote on the move was scheduled for April 18th and a pending court case—the city of Seattle was going after Bennett for the money owed on the final two years of the KeyArena lease—had yet to be resolved. There was little hope either of those things would keep the team where it belonged. Howard Schultz said he was going to sue Bennett and try to get them back, but that effort went nowhere.

The press was speaking in awkward conditional phrases—”if [Bennett is] successful, the final season in Seattle will be remembered as the most dismal in franchise history”—and so were the players. Nick Collison on April 13th: “I’m watching it like everyone else. I’ll definitely be disappointed if we have to move. I love it here for a lot of reasons. But I also accept the fact that being in the NBA you can’t control 100 percent where you’re going to be.” When George Karl’s Nuggets came to town for the second-to-last game at KeyArena, he wore a Space Needle tie. “I think the pendulum has swung to where I don’t see how [the Sonics] can be saved,” Karl said. “And the feeling I have is sadness.”

Liminal states are more painful than final ones. Losing your city’s sports team doesn't (typically) happen in the middle of the night. It’s a drawn out process—false hope in the beginning, grief in the end. Increment by increment you get sicker. A pet dies, a partner leaves. My best friend is either in my hometown or San Juan right now. I don’t really know; we don’t talk. With each passing day, the Seattleite slogan “Save our Sonics” became less like a rallying cry and more like a plaintive wail.

Apparently not everyone felt that way at the time. A Sonics season ticket holder, even with ten years of perspective: “the last three [or] four games, the crowd was really into it. Me and the people that sat near me were all puzzled and like, ‘where was this all season?’ If this would have been happening all season, I think we would have had a shot at saving this team.” On the one hand, this is idiocy. Contracts had already been drafted, powerful minds made up. On the other, having a heart sometimes makes you an idiot.

Do you ever get the sense you’re a drop of oil in a machine that’s just going to burn you up? There isn’t a lot to say about the 2007-08 Sonics. They had lost Ray Allen and Rashard Lewis the previous summer and were at the outset of a rebuild that was going to finish in another city. P.J. Carlesimo could have coached the ‘96 Bulls and still exuded a poignant overmatchedness, so obviously he was no help to a squad that routinely started Chris Wilcox and a washed up Kurt Thomas. (Bad teaching: Carlesimo played Kevin Durant at shooting guard and told the string bean killer to chuck away.) Three losing streaks of eight games or longer. Arguably the worst offense in the league. November, January, and March were all two-win months.

What comes through, or more precisely doesn’t, in much of the contemporary reporting on the Sonics exit is how blasé most of the principles involved seem. Maybe it’s that athletes are poor quotes, that businessmen and politicians are programmed to hedge every fifth word. It doesn’t help that the roster at the time was filled with unremarkables. A wistful April gamer in the Seattle Times leans on Earl Watson’s journey to this unfortunate moment and, well, it is difficult to care what Earl Watson thinks about anything. David Stern is colorful if only because his dismissiveness curdles into a kind of poetry. On Seattle suing Bennett: “[the city is] determined to exact whatever pound of flesh is possible here, and they will, and then the team will leave.”

My best friend’s mom spent twenty years renovating her modest home, scraping money together to redo the bathroom, tear out the upstairs carpets and put in hardwood floors. She did most of the work herself. Her husband wasn’t much help; he was a drunk who fled to West Virginia late in their long and unhappy marriage. I remember thinking the last time I was there, when my friend was living in his childhood bedroom, taking care of his dying and increasingly senile grandfather, that she had finally done it: the house was quite nice. This was maybe 2015. Pat and I had an argument, the culmination of some running grievances, aspects of each other’s personalities that we have always hated. Nothing that couldn’t be overcome, but we haven’t overcome it, speaking twice since that night, from two sides of an emotional trench. I think true reconciliation is beyond us now, that time is a spanner. I don’t want to go to San Juan. I don’t want to go home either.

Like chunks of ice suspended in water, we live in dread—of what might happen, what will happen, what is actively happening that we don’t feel like we can stop—while we ourselves diminish. In the last few minutes of Jason Reid’s 2010 documentary Sonicsgate: Requiem for a Team, the Seattle author and poet Sherman Alexie says that as the Sonics were slipping away from the city he “tried to appeal through my columns and talking to people... [tried] to find ‘what’s the thing you love—the thing you love the most—what’s that thing, and what would do for it, to keep it, to have it?” A poignant and ultimately useless idea. There were forces moving beyond Alexie, and they had money.

The end of the Sonics was, like the end of many things that matter to people, confusing and wildly sad. In the decade-plus since, there have been only wet gray winters and no NBA basketball in Seattle. Given a choice between the decline and its resulting nothingness, the former at least presents us with the opportunity to feel. And sometimes that is all we get. Lousy food, or starving. Panic, or wakeless sleep. Certain things just get worse forever, and then they are gone.