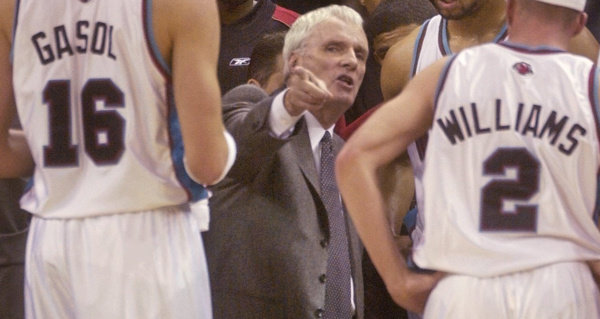 Hubie Brown has effectively been around forever. His time in basketball stretches back past what most folks currently living can remember. He graduated from Niagara University in 1955, the year after the shot clock was invented. He played briefly in the CBA back when it was called the Eastern Professional Basketball League and his first NBA coaching gig was as an assistant for the Bucks, who the previous summer had to replace the Alcindor on the back of Kareem’s jerseys.

Hubie’s been breaking down defensive coverages on television for longer than I’ve been alive, and he occupies for some sizable portion of the NBA viewing audience that peculiar ancient broadcaster space, like John Madden or Bill Raftery, where you know he was a coach back when but that entire period of his career—presumably the fundamental thing on which his credibility is built—is only a rumor to you. You take it on Brent Musburger’s authority that he knows what he’s talking about. When you’re very young, every color commentator and studio talking head is like this. And then as you age, faces you recognize start to appear. For instance, I was little when Jeff Van Gundy took the Knicks job in the mid-90s, but I can faintly recall that era. I remember his next stop with the Yao and T-Mac Rockets extremely well. If you’re 18, he’s probably just some accountantly dude your dad’s age, regurgitating the most tedious parts of Larry David’s oeuvre in the middle of a close playoff game.

Once these guys realize that calling games is considerably less stressful than coaching them, they usually grow fat, happy, and old on the air. Which is why it was unusual when Hubie interrupted his long-running broadcasting career to coach the Memphis Grizzlies in 2002. He had turned down several offers over the years but Jerry West convinced Hubie to join the Grizz after they had lost their first eight games of the season. It was an audacious hire. Though he had been following the game closely from the scorer’s table and had a steady side hustle barking at high schoolers in summer camps, Hubie hadn’t been in charge of an NBA team since he left the Knicks in 1986. He was 69, at the time the second-oldest coach in league history.

Amid doubts that he could command a modern locker room, Hubie acquitted himself well. Memphis won 28 games the season he stepped in and 50 the next. He was named Coach of the Year. You might expect a guy who treated Eddie Johnson like a speed bag to lose certain sectors of a squad that featured pliant types like Pau Gasol and Shane Battier and eccentrics like Jason Williams and Bonzi Wells, but Hubie was both successful and well-liked, mellowed at least a little bit by age and willing to let the athletic Grizzlies to run and express themselves in a way he never did his Hawks in the 70s or his Knicks in the 80s.

Back then he remonstrated and raged on the sidelines, and his profane behavior inspired a number of long features that describe him in a fit of tomato-faced pique. My favorite is Steve Oney’s profile in the Atlanta Journal Constitution Magazine, in which Hubie comes off as a panicked fascist. He claims his job is to “strain [the players’] talent until they scream out for mercy” and he constantly insults their ability and intelligence. They respect him, because he has such an excellent basketball mind, but most of them don’t seem to like him at all. “[His coaching] is okay if you’re a machine,” one says, “but if you’re a human being, he can beat you down.”

Control is the word that followed him around in those days, his insistence upon it and the histrionic ways he would lash out when it eluded him. “Our people,” Hubie said in 1979, speaking about the Hawks but also kind of about the entire rest of the world, “have to be completely subservient to my goals. That’s it.” He trashed opposing coaches—”You think [Bill Cunningham] couldn't handle a simple 1-3-1 trap? You're bleepin'-A right he couldn't!”—and picked fights with his own front office. He was insufferably rigid and carried a Christ the Redeemer-sized persecution complex. Michael Gearon, the guy who eventually fired him in Atlanta: “is it a coincidence that in every [professional] relationship the guy has ever had, the friendships aren't there? In fact, it's almost as if they're all his mortal enemies. I think Hubie really has a contempt for people."

Twenty years later, his behavior had improved. Jerry West praised Hubie’s flexibility in Memphis. Jack Ramsay observed that his friend seemed more focused on teaching his players than litigating every mistake. Hubie wasn’t cuddly with the Grizz—when he arrived, he ran his players until they were dead on their feet in two-a-day gym sessions—but he was a little bit kinder, perhaps due to some emotional intelligence he’d picked up during his extended sabbatical

Circa 1979 Hubie Brown might have made White Chocolate eat the basketball in the middle of one of his famous five-turnover displays. The 2003 version was more permissive. Williams told the Miami Herald in 2006 that “[Hubie] said he was going to let me play. He said ‘go out and throw the ball behind your back on a fast break, and if it goes in the third row, next time try it with your left hand.’ Once he said that, I knew he was for real.” In empowering Williams to make mistakes, Hubie demonstrated a gift for gentle instruction that he had never bothered with in his previous coaching stops. And it worked: he got Williams’ bloated turnover numbers down to fewer than two per game, without making the stylish guard feel like he was a 13-year-old student in a military academy.

The Hubie Brown who coached in Memphis is the Hubie I’m most familiar with: acerbic and direct, but brimming with an obvious love for sport and, if not the people who play it, then for seeing the game played well. When you’re a tortured perfectionist, miserable and immiserating to the core, becoming slightly washed up can be good for you. Time and age render you merely intense, when you were once unbearable.

Hubie wasn’t in charge of the young Grizz for long. He resigned in November of 2004, citing some minor health problems that were keeping him from performing his duties as fastidiously as he wanted to. In a statement that sounded more or less exactly like his broadcast commentary, Hubie declared that “the key [to doing the job] is spirit. See, the spirit is what gives you the passion on a daily basis. One day you wake up, you don't have that, and that's when you've got to understand that it's a time you've got to walk.”

He continues to have the requisite spirit to call thirty-odd contests per year. Nobody explains the game—nobody so clearly relishes explaining the game—like he does. Uh-kay, watch this: Hubie says for perhaps literally the millionth time, and the audience leans in because his affection for a crisp skip pass is contagious. He gives you the sense that what’s just happened—LeBron, now look here, he’s so intelligent—is the most perfect and important thing in the world. I’m very glad to still have Hubie Brown breaking things down for me, and to have known him the way I do, to be far enough away from his difficult days to find all that jackassed lunacy a little bit charming.

When you are around forever, you compile in your wake a long trail of people who found you at different points in your life, young and oblivious ones discovering you all the time. They bring their own context, ideas about what you are and what you used to be. At 85 years old, Hubie is the same obsessive he has always been, but time has changed him, in degree if not in kind. There have been many Hubie Browns—in Atlanta and New York, on TNT and ESPN, in Memphis and pretty much everywhere enthusiastic kids are learning basketball—and this is latest one. Last June, while working the Finals, he spoke to Michael Powell about aging, longtime friends dying off. “You can only paint the fence so many times, right?” he said. “See, I enjoy this and it keeps me sharp.” The unsaid thing, sad but also simply true, is that being around the NBA keeps him alive.

That’s about as reflective as Hubie gets. He’s a workaholic: the job is the job, and as long as there’s one on offer, he’ll be in it. He’s not interested in describing himself or his place in the universe. That’s okay. Over the yawning span of his career, he has acquired plenty of observers more than happy to do that for him. His father, a New Jersey dockworker who went through a torturous period of unemployment during Hubie’s childhood, often told his son you’re always a half-step from the street. Hubie’s financial security was solidified decades ago. In old age, the street is metaphorical, and it represents a more disquieting fate. But the man has built a remarkable life out of fear and restlessness. One that is collecting new admirers even now.