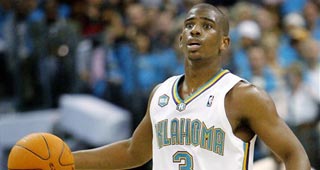 The New Orleans Hornets did actually play a few games in their home city in the season after Katrina hit. The hurricane fell upon the land, drenching and flattening it, on August 29th, 2005, about two months before the start of the 2005-06 regular season, which gave the league office just enough time to sort through the logistics of moving the franchise temporarily. The New Orleans Arena was only lightly impacted by the storm, but large swaths of the city itself were flooded and ruined. Suffering $81 billion in property damage and upwards of 1500 deaths, New Orleans was in no shape to host a full slate of NBA games.

In late September, the league, Hornets management, and Oklahoma City agreed that the team would play the bulk of their games in Sooner country for at least a season or two. Maybe the franchise would move there permanently. Though that wasn’t formally on the table, people were wondering about it. The Hornets obviously didn’t end up staying in OKC, returning for the 2007-08 season—and renaming themselves the Pelicans several years later—but they were away from New Orleans for a long while, some seven hundred miles of bayou, East Texas nothingness, and Oklahoma prairie separating them from their home. The first time they came back, just for a visit, was March 8th, 2006 against the Lakers.

“This is incredibly important,” Governor Kathleen Blanco said. “It’s not just a game. It’s a real symbol of our ability to restore and renew ourselves and come back strong.” Perhaps it was that. Less than half of the city’s residents had returned, by that point. New Orleans was still strewn with detritus, flooded homes with HELP! spray-painted on the roof. The arena was fully restored, and the game was a sellout. Kobe went for 40, which wasn’t exactly what the home crowd wanted, but at least they were entertained.

The Hornets played three games in New Orleans that year and six more the next, and the entire time before it was confirmed that they would be coming back to the Crescent City for the entirety of the 2007-08 season, and that they would even host All-Star Weekend, speculation abounded that Katrina had pushed them out of town for good.

David Stern was his typical high-handed self about it: “we plan on going through with the commitment to return to New Orleans and, in fact, there’s a lease that requires it. You want a certificate? Is there a notary in the house? Whatever you’d like.”

Owner George Shinn was non-committal: ”we all have to take the necessary steps with a positive outlook that this is going to work. If it doesn't, we'll have to deal with it at that time. What happens this summer if another hurricane comes? There are a lot of question marks."

The Hornets’ shakily imminent homecoming had the air of an obligation rather than something anyone other than the most rabid NOLA basketball fans was excited about. Novelty was definitely a factor, but the Hornets drew much larger crowds in Oklahoma City than they ever did in New Orleans. Saints owner—and eventual, grudging Hornets/Pelicans owner—Tom Benson was openly exploring the possibility of moving the football team to San Antonio. Leaving New Orleans would have been like divorcing a spouse in the wake of a cancer diagnosis, but it also made cold sense.

At All-Star Weekend 2008, all the national outlets wrote their State of the Hornets piece and each of them mentioned that the franchise ranked 29th in attendance despite fielding a pretty good squad featuring Chris Paul, David West, and Peja Stojakovich. In the decade since, despite the ascendance of Anthony Davis and several playoff runs, the Hornets/Pelicans have remained in the bottom third of the league in terms of filling their building. Generalizations about fanbases are hurtful and unfair, because there are always, no matter the city, a fair number of people who aren’t the way that you say they are, but it’s broadly true that New Orleans is a football town and basketball isn’t exactly their bag. It would have been insane for Tom Benson to move the Saints. Letting the Hornets stay in Oklahoma City was a viable option.

We’re soon going to find out how deeply OKC fans care about their Thunder, because for the first time in a while, the team might be quite bad. You’ll remember that they left Seattle with Kevin Durant already on the roster, and with Russell Westbrook soon to join him. A season or two with an aging Chris Paul—who, hey, it turns out is having a kind of homecoming of his own—might change things. And who knows, New Orleans could fall in love with Zion Williamson and the title contender in the making that David Griffin’s trying to construct. The health of sports franchises, especially ones that aren’t in massive metropolitan areas, tends to fluctuate. The Knicks, Bulls, and Lakers will always be reasonably popular. Everything else is subject to change.

The Pelicans’ ownership situation is currently a mess. It has been since the NBA gave Tom Benson a cut-rate deal in 2012 and the now-deceased financial and automotive tycoon sloppily merged them with his football team. Benson’s been dead since March of last year and his wife Gayle now runs the operation, over protest from Benson’s surviving children. To parse the current state of the Pelicans is another article in itself, but suffice it to say, the situation is unstable. It’s been that way for a long time now—really ever since the franchise relocated from Charlotte in 2002, and especially since Katrina. This excruciating state of limbo unfortunately defines the Pelicans. It’s difficult to say where they belong.