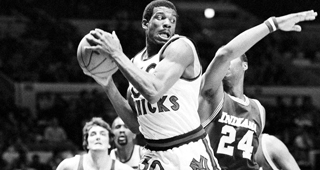 There are athletes from before your time who still translate. When I watch David Thompson highlights, I understand why elder sportswriters say he was Jordan before Jordan. Bird and Magic’s genius is obvious. George Gervin is smooth in a way that seems to make static-heathered VHS rips gleam high definition. It’s a specifically satisfying feeling, when you’ve heard so much about a player’s brilliance and then discover that the footage matches up with the legend, more or less.

When I was a teenager, I spent a lot of time reading old Source, Rolling Stone, and Robert Christgau reviews, and then hunting down the records critics from back when were so enthused about. The first time you listen to In A Silent Way for yourself, after you’ve been amply prepared to love it, is like realizing a better way of breathing—because Miles is on one, but also because you at once sense yourself existing at the end of a long timeline of people having their minds lit up like a marquee. Something that’s made sense to countless others now makes sense to you too.

And then there is the opposite experience, which makes you feel like a charlatan or a brave iconoclast, depending. For instance, I’m lightly ashamed of never having been able to give myself over to This Heat completely, but I’m positive Love Changes is wack hippie musical theater. How you frame your own dissatisfaction is just vanity and projection—I am the kind of person who...—but in the end there is only a sensation of loss. Like you drove all the way to the Grand Canyon only to find it filled in with cement.

Bernard King is the old-time basketball god who loses me, despite the fact there is so much that’s appealing about him. He was in his brief and stratospheric prime as the standout on a pair of competitive Knicks teams, including the ‘83-‘84 version that pushed the eventual champion Boston Celtics to seven games in the Eastern Conference Semis. King’s talent wasn’t as many-valenced as Bird’s, but he kept up with Larry’s scoring in that series, posting 43- and 44-point performances in Games 4 and 6. Both of those transpired at Madison Square Garden, and that arena bestows a certain specialness upon its favorite stars as they’re heating up. It is maybe the phenomenon of a massive and difficult city relenting to one person. If King was never the best player in the league at any given time, he was the most powerfully adored.

And yet I find his game… kind of boring. He was a barrel-chested 6-foot-7 forward who took a lot of pull-ups and turnarounds. He wasn’t a gifted passer or effective defender. He was a lightning bolt in the open floor, throwing down running two-handers that seemed to threaten the basket’s structural integrity, but his best years came on Hubie Brown-coached Knicks teams that stubbornly abstained from the transition game, so much of King’s work was done in and around the post, where he would catch the ball, turn, and go up with it all in one motion. He released his shot slightly before the apex of his jump, and his footwork was textbook, so he had a tendency to catch defenders sleeping and was practically running back on defense by the time double teams arrived. He also had that pull-up, which isn’t the slick and violent Dwyane Wade maneuver we think of today. He would just slow down a bit and launch the thing from 14 feet.

All of this was terrifically effective, but King scoring sprees could get repetitive. For instance, a long stretch of his famous 60-point game against the Nets is just New Jersey incompetently guarding against that devastating turnaround by fronting him without providing enough weak side help. King receives the lob and lays it in, receives the lob and hits a short jumper. This goes on for like half a quarter. I have heard Spike Lee rhapsodize about this game, and it does not really stand up to middle-aged Mars Blackmon’s enthusiasm.

I really like this brief 2014 interview with King in which he talks about two technical aspects of his game. “I was a very analytical player,” he says before explaining that he liked to attack from the baseline because it was easier to keep track of where the defense was coming from. He also mentions that he used to pivot on his heel rather than the ball of his foot because he felt it gave him a smoother turn. This is 1.) a pretty neat thing to have figured out, and 2.) an accidental humblebrag about his athleticism, because you have to have ridiculously good balance to get away with a move like that. King observes that “Hakeem Olajuwon [is] the only player I’ve ever seen that pivots on his heel as I did,” which is to say only he and Dream could attempt that maneuver and not fall on their asses time after time.

Learning stuff like this about King is rewarding. I know he had to take some time away from basketball due to a substance abuse issues, and in that struggle, I relate to him deeply. I also enjoy the way he talks about the sport. Here is something beautiful he said after amassing back-to-back 50-point games: “I could see and feel everything. It's almost like an unconscious feeling, as if you're being guided to all the right places at just the right times. I got the ball in the positions I like to get it, and I felt all the seams. What I mean by that is that you don't always have to look to see where the defense is, you just feel it and go."

Feeling, for the athletes and their fans, is the elemental thing in sports. It is what you seek. Understanding is its own pursuit, and while it’s not half-bad, it is not the peak of this whole experience. I think I understand Bernard King more than I feel him, and I’m slightly sad to be missing something, to not totally agree with the older folks who will tell you—rave to you—about what a free-scoring freak King was. There are, unfortunately, certain experiences that reach you too late, certain songs you know the words to, but never throw on.