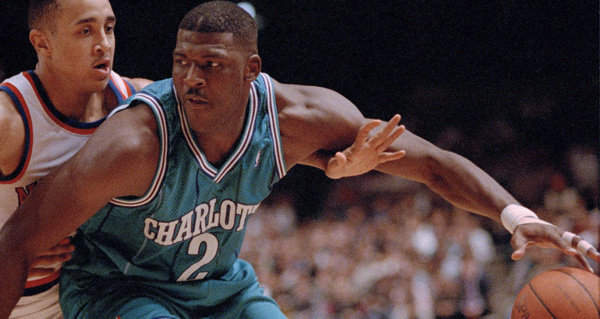 The immensity of a young Larry Johnson is difficult to describe. As a teen, he once dunked on a neighborhood hoop, brought the entire backboard down onto his legs, and just sat there for a moment, shocked but wholly unharmed, still clutching the rim in his hands. He was the best college player in the country for the two years he attended UNLV, and early in his NBA career, he was state of the art. Nobody combined the traits he had at such absurd concentrations. Too strong for quick defenders, too quick for strong defenders. Astoundingly powerful, you couldn’t keep him away from the basket or off the glass. And he was subtle, too: a much better passer than his charging fullback style suggested, a decent shooter, which made it easier for him to blow past opponents for yet another dunk. L.J. was a dynamo, this bright bellowing man among men—for two seasons, and then he was never the same.

“There’s not another Larry Johnson out there. This fella on my right, they only come around once every seven or eight years.” That’s Johnson’s first NBA coach, Allan Bristow, beaming about his young star. There wasn’t any debate over it: the Charlotte Hornets took L.J. with the first overall pick in the 1991 draft, right after he’d nearly completed an undefeated season alongside Stacey Augmon and Greg Anthony at UNLV and a year after he was the main reason they won a national championship. The guy shot 66.4 percent from the field in college. There wasn’t a 21-year-old alive who could check him.

He stepped into a Hornets organization that had just been founded in 1988 and hadn’t yet gotten to enjoy a franchise player, which Johnson functioned as almost immediately. He scored; he dished. He lit up the court with his own peculiar energy, some curious friendly anger. He was like a thunderstorm having a good time.

Larry was such a gifted athlete that analysts and pundits wondered if he would struggle initially, playing against burly adults rather than the finest the Big West had to offer, but it turned out that L.J. could bully professionals with just a little greater strain than he did the poor souls at San Jose State. From a 1992 Leigh Montville profile: “[Johnson] is 6'5¾" in his stocking feet, weighs 250 pounds, and no one makes him go anywhere on the floor he doesn't want to go. He has long arms and a prizefighter's determination… He is as good as he was supposed to be. And probably better.”

His early career résumé backs up that assessment. L.J. posted 19 and 11 in his first season, winning Rookie of the Year almost unanimously. (Who the hell vote dfor Billy Owens?) He made the All-Star team the next year and improved his scoring, efficiency, and assist numbers. Here’s an exercise:

Those are second season stats for Charles Barkley, Larry, and Blake Griffin, respectively. It’s not a stretch, given the spring-loaded golem energy that links those three together, to say that Johnson was, for a spell, the evolutionary link between Chuck and Blake.

Of course, that theory would be more compelling if we had ever gotten to see what a healthy Larry Johnson looked like in his late 20s, with several NBA seasons behind him and his frame not yet breaking down. In July of 1993, coming off a promising playoff run alongside Alonzo Mourning, with his whole bright future in front of him, he was playing in a charity game in Washington D.C., threw down a dunk, and felt a pain shoot all the way from his lower back down through his right leg. It was a bulging disk, and though Johnson eventually rehabbed and got himself back into pretty good shape, that injury was like the end of a geological era for his body.

Confident that Johnson would recover completely, the Hornets signed him to a huge contract extension (12 years, $84 million), but he was groundbound throughout the 1993-94 season. Hiring a new trainer the following sumer helped L.J. recover some—but crucially, not all—of his explosiveness. 1994-95 was a productive season, both for Johnson and for the Hornets—Mourning was well and truly developing into a two-way star—but they got bounced from the playoffs early by the five-seed Bulls who absolutely should not have been a five-seed because they had a returning-from-baseball Michael Jordan on the roster. Mourning, miffed that management wouldn’t pay him more money than the diminished L.J., got himself traded to Miami over the offseason and that was the end of the once-budding Charlotte Hornets. Johnson ended up in New York a year later, where he would serve as more of a useful cog than a franchise cornerstone—and famously take a few swings at Mourning in a playoff game.

It’s not that L.J. stopped being interesting or wasn’t any good after tweaking his back in that charity game. All told, he had a memorable career. But there exists, in parallel, a more extraordinary one that he hardly began to embark upon before it was taken from him. It is difficult to describe the immensity of a young Larry Johnson. Because even he didn’t get a firm handle on it, to use his blazing ability the way he might have if he had possessed it for a little longer. To define what he was is in some sense to lament what he never became. But he was something: a hot, brief, furious exclamation of a player.