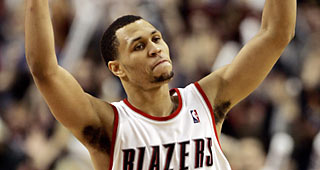 We’re late in this series and haven’t yet highlighted enough truly bad sportswriting, so here’s Dan Raley arguing for the merits of as-yet undrafted Brandon Roy in the Seattle Post-Intelligencer: “in recent seasons, the league has welcomed an influx of talented, four-year college players, among them Tayshaun Prince, Josh Howard, and [Dwyade] Wade, all demonstrating enough maturity to push the team concept and stay clear of trouble. They're bringing fans back to the game. They're making their teams successful.”

Josh Howard slipped to 29th in the 2003 draft because teams were concerned that he smoked too much pot, and Dwyane Wade left after his sophomore season at Marquette, but beyond the factual errors and weird dogwhistliness about fans coming back to the game—what do those fans look like, Dan?—lies a fine assessment of Roy. He really was mature, coming out of Washington at age 22, and he did make the Blazers better right away. There was something special about him, and it was rooted in his ordinariness.

There were concerns about his cartilage-deficient knees, and they were well-founded, because the knees had four productive seasons in them and that—except for one legendary playoff fourth quarter—was absolutely it. But Roy proved to be a more than solid value, drafted sixth behind Andrea Bargnani, Adam Morrison, Tyrus Thomas, and Shelden Williams. Randy Foye went seventh. Everyone thinks they’re taking Chris Paul in the early lottery, but they are more likely selecting a soon to be lamented figure, somebody whom local sportswriters will say “looks to be putting it together” heading into season three and then is sitting at the end of somebody else’s bench, a reclamation project, by the time their rookie deal is up. The power of positive thinking, etc., but you wonder if any general manager has ever made a pick and thought there’s a decent chance this guy is Chris Wilcox. Brandon Roy wasn’t a sure thing, but the outline of what he would be in the NBA was much sharper than Tyrus Thomas’s.

He had well-defined talents, and he applied them immediately. He was so good, so early. Even promising rookies are usually net-minuses, but Roy had a lot of things figured out upon arrival, because he had spent his college career calibrating an array of moves that worked even though he couldn’t get by anybody on quickness alone. It’s been said about Paul Pierce that his game at 23 and his game at 32 weren’t all that dissimilar. He could never overwhelm opponents in the first place; everything he developed over time was just the product of observing of the superior athletes guarding him and learning how to misdirect them. Roy was like that. He lacked a blow-by step, so he honed a compensatory arsenal: the hesitation dribble, the pull-up jumper, nameless maneuvers that got him to the hoop circuitously and to the regular frustration of defenders who thought they had him contained.

One of the most clever things he would do is drive, not past his opponent, but right into their chest, and he would turn sideways for a second, like he was posting them up 18 feet from the basket, and then accelerate toward the basket. He couldn’t get past you if you were two or three feet in front of him, but if you were zero feet away, and maybe a little off-balance from a shoulder bump, that was a winnable duel. And Roy was such a creative finisher around the rim, the scrambling weak-side big man usually wasn’t a factor.

Kobe Bryant said that Roy had no weaknesses, which wasn’t exactly true. He excelled at everything he was capable of, and that more than made up for what he couldn’t do. Every great basketball player is a great problem-solver, but there are some—particularly young stars, like Giannis now or LeBron 10 years ago—who solve certain ones simply by jumping over the entire defense. That wasn’t an option for Roy. He was impressive in his own way, filming epics with an 8mm camera. He was named Rookie of the Year in 2007. The next season, he took off in earnest, averaging 19.1 PPG, 5.8 APG, and 4.7 RPG and making his first of three consecutive All-Star appearances.

2008-09 was his peak. Roy’s scoring and efficiency numbers rose, and in concert with LaMarcus Aldridge, he lifted Portland to its first playoff appearance since the tail end of the Jail Blazers era. They lost to the Rockets in the opening round, but it was the kind of defeat that doesn’t sting because everything is otherwise trending upward. Roy was 24 years old and Aldridge was 23. Nate McMillan was then a highly praised coach, and Rudy Fernandez had just finished the first season of what was supposed to be a sensational, Ginobili-esque career. Greg Oden’s rookie year hadn’t been inspiring, but he was the first overall pick two summers ago for a reason. He still had plenty of time to heal up and fulfill at least some of his potential.

Roy had headed into that 2008-09 season on the mend from a minor knee procedure. In retrospect, this was a harbinger of his decline. He hardly made it to the end of the following year, missing the last few weeks of the season and the first three games of the Blazers’ first round loss to the Suns with a meniscus tear. Over the summer, it was confirmed that Roy had zero cartilage in either knee. He missed about half the 2010-11 season, never looked like himself, and then retired, surfacing again only to play five games for the Timberwolves in 2012.

The maturity that Roy displayed upon his NBA arrival was even more hard-won than it seemed, as he entered the league with a clock ticking over his head. Though he didn’t know on what date his knees would give out, he knew they would at some point, and there was a decent chance it would happen before anybody was ready for it. Of course, you can’t prepare for the moment when the thing you’ve built your life around will be taken away from you—not if that’s age 25, not if it’s 55—but you hope you get a satisfying run in, before the well goes dry. Though only Brandon Roy can tell us if that’s the case, from afar we can observe that he made the most of what he was given. This was his speciality, the thing that set him apart, for a time.