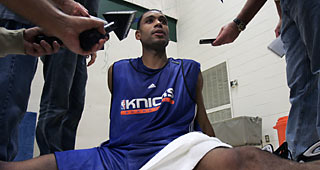 “Two years and two months removed from a knee operation that permanently warped the arc of his career,” Howard Beck wrote in August of 2005, “Allan Houston still is not ready to play basketball. His final day as a Knick may yet still be on the horizon.” In the recently signed collective bargaining agreement, the NBA and the Players’ Association had agreed to an amnesty provision that allowed teams to cut a player in order to avoid paying luxury tax on his contract. It was almost immediately dubbed the Allan Houston Rule, under the assumption that the Knicks would use this measure to erase Houston’s enormous $100 million contract (of which they still owed $40 million) from the books. Instead, they waived Jerome Williams, believing there was a chance that Houston might be able to fully rehab his ailing knee. “I just don’t have it in my mind that I’m not going to be able to come back,” Houston said. And then he retired two months later.

Allan Houston wasn’t anybody’s favorite. James Dolan liked him because he called him Mr. Dolan in the press, but Knicks fans had a fraught relationship with a pretty good shooting guard who was paid like a franchise player, a quiet and deeply religious man who often seemed out of place beneath the Garden’s bright lights. The New York media is a force of overwhelming truculence and its sports fans tend towards impassioned overstatement too, so every Knick inevitably ends up a caricature, strengths exaggerated and mild personality defects blown out of proportion. For nine years, New York tried to figure out what to make of Allan Houston and unhappily reached the non-conclusion you arrive at when you’ve traversed enough of the whaling history parts of Moby Dick. Oh, okay, this isn’t a metaphor for anything; I’m not going to circle back later and realize there was a broader point to any of this. I’m just reading about whales now.

The guy could shoot; with a 40.2 career percentage from three-point range, he was one of the better marksmen of his era. He had a turnaround baseline jumper that looked nice when it went in and though iso-ball wasn’t his strength, he could take less-than-elite defenders off the dribble and pull from 18 feet. Here is where anybody who was watching the NBA circa 1998 feels a little embarrassed: that was just about the full extent of what Allen Houston could do on a basketball court, and he was considered a borderline star. From 1996 to 2003, he averaged 18.8 points and 2.5 assists per game. There are a number of meaningful differences between Houston and Reggie Miller—the latter was a better defender and a much stronger personality—but Reggie made three All-NBA teams in the 90s while averaging 20 points and 2.8 assists per game. It was the nature of the position at the time: you could operate near the top of your field while still being quite a limited player.

All of this makes Houston sound like a drip, which he wasn’t. He was unfavorably compared to Miller when he arrived in New York—“there are those who wonder if the Knicks made the right move in signing Houston to be their shooting guard when Reggie Miller was still available,” Phil Taylor wrote in December of 1996; “Miller is six years older than Houston, but has more of a thick-skinned New York-style mentality”—but he narrowly outplayed Reggie in the 1999 Eastern Conference Finals. His best season (19.7 PPG on 48.7 percent shooting) contributed to a 50-win Knicks team that was in most ways superior to the previous year’s Finals squad, even though they crashed out against the Pacers in the playoffs. Until his career-altering, then -ending knee injury in 2003, he almost never got hurt. He wasn’t selfish or difficult to deal with. Allan Houston was rock solid dependable.

But he simply wasn’t the type of player who could transcend his circumstance, or even particularly stand out despite the relatively high quality of the work he put in. He showed up in New York as the heralded final piece of the championship puzzle right as Patrick Ewing was about to fall off a cliff. He played a chunk of his Knicks career alongside way, way more charismatic presences like Latrell Sprewell and Larry Johnson. He was conflict-averse: Houston didn’t throw hands with Alonzo Mourning or attempt to blow out P.J. Brown’s knee. He wasn’t an antagonizer par excellence like Reggie. We would think of Allan Houston differently, perhaps similarly to the way we describe Klay Thompson now, if he had been the third option on a great team. Instead he was a mild disappointment, collecting one of the highest salaries in the league for play that didn’t dazzle or overwhelm. You couldn’t kill him for what he accomplished, but his game was shot through with a persistent is-that-all-there-is? quality.

In November of 1997, while Houston was still adapting to New York, Selena Roberts failed to take the measure of him in a garbled Times piece. The brain-bending sentences—”he can be suburban, but feel comfortable in any neighborhood”—are Roberts’s fault, but there is also behind the bad prose a decent reporter trying to figure out what exactly this guy’s deal is and coming up empty. He has a “shy, almost slumped exterior” and often seems “free of aggression.” Roberts hints at some assertiveness roiling behind that facade—he is a professional athlete after all; he must have a powerful internal drive—but she can’t cite any examples of it. His quotes are bland and polite. He does an okay Charles Oakley impression. His wife is a real firecracker. This sounded like a much better idea when I pitched my editor on it last week. Oh well.

In fact, maybe Roberts’ boring profile is illuminating, in its way. It’s not like any of her contemporaries managed to make Allan Houston seem interesting either. Probably because he isn’t. He was an important Knick because he happened to be in New York during one of those rare spells in which they fielded a series of better-than-average squads. Houston did his better-than-averagest for them and it was a job unspectacularly done. If it was also never enough, that has at least as much to do with the teammates and the city around Houston as the player himself. For his part, he chipped in his 18 and 3 almost every night, and you could make of it whatever you would.