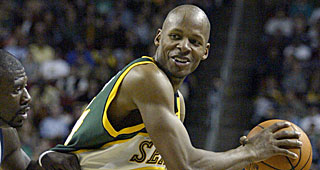 Old Ray Allen has cannibalized his younger self. Even great directors don’t get to pick which of their movies are canonized and athletes in team sports only sort of have a say in which of their seasons live long in the memory. Allen’s highest profile work came on the back half of his career, a little bit past it on one title-winner and nearing retirement on another, spotting up at the periphery of other stars’ still floodlight-bright talent. When he joined Boston in 2007, he took seven fewer shots per game than he had the previous season in Seattle. With the Heat, he offered reliable range off a thin bench, kin with Mike Miller and James Jones in keeping the flies off LeBron and remembering Netscape Navigator. He logged that one immortal shot, of course, but 37-year-old Ray Allen certainly wasn’t Ray Allen, not as he existed for quite a while, in league’s dimmer corners.

“I like to come through the middle,” he claimed, painfully camera-shy in an Inside Stuff segment about his rookie year. “Sometimes I like to hang up in the air for a little while.” This was the Ray Allen who slashed—who had hair, briefly, and a nimble handle for much longer than that. Even adjusted for his era, he didn’t take an extraordinary amount of threes early in his career, preferring to attack the basket. The antecedent in many ways to Steph Curry and James Harden, there aren’t clips in those players’ back catalogues of them throwing it down in traffic, that violence has never been in their games, but Ray, string beanish as he was, could get up and finish through contact. The long-range buzzer-beaters he hit in his 30s are mirrored by strong crunchtime drives in his 20s.. Tracy McGrady can tell you about one of them.

Ray Allen’s ahead-of-its-time talent and the richly Jordan-perfumed NBA where isoball reigned and even smaller guys weren’t allowed to play too pretty—you can’t win a championship shooting jumpers—combined to create one of the most dynamic players the league has ever seen, someone equally comfortable running off screens like Reggie Miller, pulling up like Kobe, or lunging at the rim like McGrady. Allen wasn’t ever the best at his position, but he had an unmatched aesthetic versatility—and was a decent secondary playmaker to boot.

He did all of this in relative obscurity. As Giannis has recently discovered, even a title contender in Milwaukee goes underdiscussed. Allen’s Bucks were typically fun—free-scoring, Sam Cassell and Big Dog Robinson in their primes—but except for the 2000-01 season, when they probably should have made the Finals over Iverson’s Sixers, they were also a middling bunch, barely qualifying for the playoffs each year and occasionally missing out altogether. Milwaukee gave up on Ray halfway through 2002-03, when they shipped him, Kevin Ollie, Flip Murray, and a conditional first-rounder to Seattle for—[research note: why is the bad GM in these deals from days gone past, no matter the franchises involved, always Ernie Grunfeld?]—Desmond Mason and a 33-year-old Gary Payton in the final year of his contract.

Allen didn’t get along with George Karl, which doesn’t seem like a great reason to trade away your 27-year-old All-Star two-guard, especially considering George Karl didn’t get along with a lot of people, but that’s what happened, and it ushered in the last truly enjoyable spell of Sonics basketball before the team left for Oklahoma City in 2008. Allen, cooking in another market the NBA zeitgeist tended to ignore, became the very best version of himself playing alongside Rashard Lewis and for Nate McMillan back when he was a hot commodity. His last full season in Milwaukee, he had started to fire freely from three-point range, shooting 43.4 percent on 7.7 attempts per game, and McMillan encouraged him to keep it up. Lewis and Vlad Radmanović were happy to launch triples too and what resulted was an offense only slightly less forward-thinking than the considerably more famous Seven Seconds or Less Suns. The 2004-05 Sonics ranked right behind Mike D’Antoni’s brigade in terms of three point attempts and offensive rating.

The crucial difference between the two sides, beyond the extra 10 wins the Suns racked up during the regular season, was that the Sonics played with Tarkovskian deliberateness. McMillan favored half-court sets to the perma-transition Steve Nash was pushing in Phoenix. This was partially because Ray Allen was an awesome half-court player at the time. The broad range of offensive skills he demonstrated in Milwaukee only sharpened in Seattle. He was taking a nearly league-leading amount of threes but still creating for himself and others off the dribble, and in fact getting to the rim and the free throw line as often as he ever had. 2004-05 was the crest of his prime, his scoring ability the rocket fuel firing a 52-win Sonics squad that made the second round of the playoffs and perhaps could have gone even further had he not missed most of Game 1 with a Bruce Bowen-induced ankle sprain, or had Rashard Lewis not sprained his big toe and missed the back half of the series they eventually lost to the Spurs. Allen wrapped up that season ninth in the MVP voting and made second team All-NBA for the only time in his career.

The positive vibes of 2004-05 were short-lived. McMillan left the Sonics the following summer to coach in Portland and the franchise struggled under Bobs Weiss and Hill. Allen posted gaudy scoring averages, but the teams were lousy. Then he was sent to Boston in 2007, and from there, history starts tracking him more closely, because those Celtics squads were so good, but Ray took a step back. He became merely a shooter, an excellent third option behind Paul Pierce and Kevin Garnett. The Miami days were character actor work for a faded star.

That’s a fine way to live in the minds of other people: a sharpshooting winner. But the Ray Allen who carried offenses and ultimately always lost was the better player, the more interesting artist. That part of his career hasn’t survived as vividly as the rest, despite its undeniable vividness in the moment.