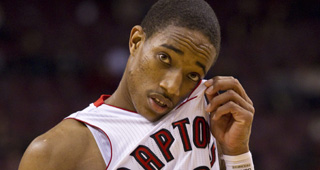 Sometimes the most meaningful improvements are the ones that go almost entirely unnoticed.

In terms of league-wide recognition, DeMar DeRozan is having a moderately better campaign as a sophomore than he did as a rookie. His PER has improved by 11% and his eFG% has actually dropped from 50.2% to 47.3%. DeRozan is shooting just 9.7% from three, down from 25.0% last season. Isolating out his two-point attempts, DeRozan's percentage has dropped to 48.5% from 50.6%.

But DeRozan has become a much better shooter on his mid-range and long mid-range jumper. He has progressively improved this season as a jump-shooter and his usage increase in this area of the floor has virtually tripled from the beginning of the season.

He is shooting from a better clip here than high-quality scorers we associate with the mid-range jumper like Kevin Durant, LeBron James, Paul Pierce and Kobe Bryant.

This part of his game is not elite yet by any stretch, but it gives him the opportunity to setup his athleticism to get into the paint because opposing defenders must contest that shot.

Case in point was the very first bucket in the overtime session against the Nets on Saturday when he blew by Sasha Vujacic after the baseline catch and completed a reverse layup in traffic with his left hand.

The ability for DeRozan to keep things incredibly simple and attempt 20-footers when the defense sags and take his man to the paint off the dribble when contested puts him in an excellent opportunity to succeed offensively.

DeRozan also shoots the ball well when putting the ball on the floor once to get a rhythm. He is much more of a rhythm shooter than a pure shooter and the bounce visibly makes him more comfortable. Ideally, this would become an unnecessary movement but it creates automatic movement and that is a positive given DeRozan's skill-set and his effectiveness in getting into the paint from the perimeter upon the catch.

DeRozan's length and natural elevation makes getting clean looks at the basket an easy proposition and the fact that he is now hitting them at an impressive rate is very encouraging.

During his rookie season, DeRozan's offense was largely a byproduct of creation from other players whether it was as on the catch-and-shoot or in transition. Chris Bosh was still around and the ball was in his hands a lot and there weren't opportunities for DeRozan to use the dribble or to come off screens.

His usage has increased from 18.1 as a rookie to 22.2 as a sophomore, not incredibly dramatic but he attempted one shot every 2.7 minutes before the All-Star break and he is now attempting one shot every 2.1 minutes. DeRozan is averaging 17.2 points per 36 minutes for the season and 21.1 points since the break, which isn't too far off from primary scorer territory.

DeRozan has a long ways to go to be considered a primary or even secondary scorer on a good team, but he is further along than I was anticipating heading into the season and the fact that he has a clearly definable niche where he is capable of excelling should give the Raptors reason for optimism for his all important third-year season.