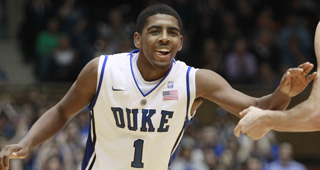 For a supposed sure thing, we didn’t get to see much of Kyrie Irving as a freshman at Duke because of an early season foot injury. We saw the pre-injury glimpses that had moments of brilliance and then we saw the surprising return for three tournament games in March.

Even if we assume a full season and extend his production out, we are not looking at a top-two pick of the first order. Irving does just about everything very well, but there is nothing to intimate he is perennial All-Star special in an NBA loaded with elite point guards.

With that as an aside, Kyrie Irving will be a very good NBA player for a very long time. We saw a player like Mike Bibby selected extremely high in a weak draft year and even though he was never one of the best two or three at his position, he certainly justified his draft position and was a bounce or referee call away from being the point guard of a title winner.

While we’re comparing point guards, Irving has far more in common with those from the early 90s, such as Kevin Johnson and Tim Hardaway than he does with athletic freaks like Derrick Rose, Russell Westbrook Rajon Rondo and John Wall.

With the dribble, Irving is savvy and in control during his zig-zags through the holes of the defense and does not rely on explosion. His quickness and the explosion he does possess is subtle as he values his control. We constantly talk about players who ‘impose their physical will’ upon their opponent, but maybe Irving will make us begin to appreciate players who ‘impose their control’.

Irving’s impressive basketball IQ is probably on display the most when we see him off the dribble in the halfcourt. He has all the Pistol Pete bells and whistles, whether it is a crossover or a behind the back dribble in traffic. He is smooth and confident and when he does exhibit a little showmanship, it is with a purpose and you can tell how natural it feels for him.

Irving understands the nuance of pace with the dribble, which probably goes the furthest in how he is able to be such an inventive shotmaker. Because he doesn’t have supreme athletic ability, getting past his man in pure ISOs may prove difficult in the NBA.

But assuming he does free himself, Irving uses the glass well around the bucket and he also exhibits strong body control in traffic.

Irving’s single most impressive skill is the way he finishes layups with his left hand. It is truly elite in the manner of how he uses his body and finishes in a multitude of ways.

Because Irving won’t consistently finish in the paint, his halfcourt scoring will largely be predicated on his jumper. He can catch and shoot spot-up jumpers without bring the ball down, which is rare for players his age. This allows him to quickly get his shot off against taller defenders.

I wouldn’t call the form of his shot pure, but is compact with good arc and a clean follow-through. Irving appears capable of becoming a 40% shooter on his three-point attempts, but he very clearly still needs his thousand shots per offseason day to become great.

More importantly as it relates to the dribble and where most of his attempts will come from, Irving’s shot mechanics profile him to become very good in the mid-range. A sense of control and balance with the dribble is obviously critical to being able to shoot successfully from it. If Irving proves capable of being this type of knock-down mid-range shooter, then that will absolutely open up the dribble-drive to the paint.

As a pure point guard, the sample size for me is too small to judge. Out of his dribble penetration, he will attack the defense to create attention to open up teammates.

He has good signs of intelligence, simplicity and vision, which should lead to a good assist to turnover ratio. He throws a catchable ball and will set his teammates up nicely for jumpers.

But I haven’t seen the type of jaw-dropping imagination with his passes that we demand of point guards in order for them to be called great.

Defensively, Irving will need to be drafted into a culture that develops that end of the floor to become even adequate. His help defense fundamentals need to be fostered and his heart simply doesn’t seem to be in it the way he becomes electric with the ball in his hands.

Irving needs to be a little bit more ready when defending the ball and his lackadaisical effort leaves him vulnerable to even a moderately quick first step.

While a successful NBA career is ahead of Irving, it is highly unlikely he becomes a transcendent player.