"We're Going To Look For Someone With, Certainly, Experience" 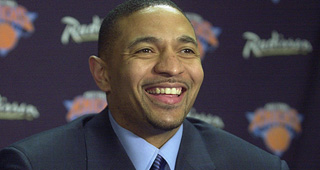 "We're going to look for someone with, certainly, experience, someone with a lot of great ability to relate to players.” That’s what Golden State Warriors owner Joe Lacob said surrounding the decision to part ways with Keith Smart six weeks ago.

That sentiment contains a fair bit of truth, considering the rough track record of first-time NBA coaches. Even many of those with no head coaching experience that garnered success gained it after numerous hard seasons and massive talent turnover.

What makes the Mark Jackson hire so baffling and frustrating is that it carries remarkably little short-term or long-term logic in a way that so perfectly typifies the ineptitude that has plagued the franchise for nearly two decades. After coming off the hiring of Bob Myers, one of most intuitive and intelligent decisions made in eons for the franchise, the Warriors finally had some momentum. As someone who wrote at length during the season about how hard it would be to improve the overall organization in the near term, securing the talents of a promising young talent off the court made all the sense in the world.

From there, the team needed to find a coach who ideally fit the vision of a guy who could keep some positive momentum going for 2011-12 (should it happen) while also being a positive molding influence moving forward with such a young roster. Now, deciding that Keith  Smart could not fit this bill carries its own justifications and rationales, and I have absolutely no issue with that, particularly when team brass did so in a reasonable period of time with coherent reasons for doing so.

However, turning around and using the momentum of the Jerry West and Bob Myers additions to get a coach who has ZERO coaching experience at ANY level makes no sense. The biggest flaw with it connects with what I call the “Jermaine O’Neal Theory” (which could soon be re-dubbed the “DeAndre Jordan Theory”). The concept behind it is that teams far too often take a risk and the time to develop a talent without thinking about the fact that they are likely cultivating that person for some other franchise. Now, in certain circumstances teams do this for their own benefit, like Gregg Popovich in San Antonio, yet far too often those players/coaches move on either because the team gave up on them prematurely or because the individual had the freedom to leave and chose to take their talents elsewhere.

Two months ago today, I wrote about how few coaches have a substantially positive effect on their team’s fortunes in the win column. Guys like Popovich, Tom Thibideau, and Phil Jackson do not come along frequently and they rarely change addresses once identified as such. Could Mark Jackson eventually become one of that elite few? Certainly. He seems to have a passion for the game and he appeared to resonate with his teammates as a player. However, it will inevitably take him some time to both find his voice as a coach and work his way to that level considering his complete lack of relevant experience.

As such, there are two basic outcomes to this situation.

First, the team sputters because of lack of talent relative to the rest of the conference, coaching, bad luck, or some other reason. Jackson gets a few seasons (look at the tight leash on Smart, despite him doing fine with what they had) and gets let go either as a scapegoat or a legitimate cause of the disappointment. He moves on, possibly to success ala Doc Rivers after Orlando or possibly back into another part of the basketball world like the one he leaves to join Golden State.

Second, Mark catches lightning in a bottle and becomes an elite coach much sooner than expected. From here, both of the final two paths emerge. In one, he stays with the Warriors and the reap the benefits of winning their dice roll. In the other, Mark parlays his success in Oakland into another gig for one of his seven former teams or the greater New York area, where he grew up in Brooklyn (future home of the Nets) and played his college ball at St. John’s (who play at Madison Square Garden, home of the Knicks). Considering the general paucity of personal ties to connect him to the Bay Area, even a dream scenario for Mark Jackson’s career development would not yield many returns to the franchise that gives him his first big break. In a sense, the Warriors are doing teams like the Knicks a favor by trying out and investing in someone who, much like any free agent player, eventually will have the ability to coach where he wants should he earn those options.

Golden State is in a hard situation, as management ratcheted up expectations after making a flawed “big splash” signing last season that depleted their depth and left them with an inferior and mismatched core compared to some Western Conference foes. Without a draft pick high enough to generate enthusiasm, a team desperate to win some positive press before they actually win some games had few avenues to do so. Unfortunately, it appears that Lacob and the rest went for sizzle over steak, breaking their own rubric to drop a roulette ball on the wheel where they might not even be able to cash out should it land on the right number. I’m hoping for the best for both Mark Jackson and the franchise at large, yet these kinds of decisions make it awfully hard to stay optimistic.