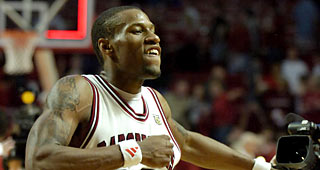 Zalgiris Kaunas forward Sonny Weems was the first NBA player who decided to move overseas during the lockout. Back in the beginning of July, Weems signed a deal with Euroleague team Zalgiris and there was no way back as he did not include an NBA-out option in his contract.

Weems is undoubtedly one of the best individual players in the league and is averaging 17.8 points (48% 3FG) and 4.3 rebounds. Moreover, Weems is the seventh best scorer in Euroleague and ranks the highest among all NBA players.

However, not everything in Lithuania has gone the way Weems expected.

Weems talked about his hope that after a bad NBA season to finally ‘be a part of winning basketball club’. Weems’ wish was not granted as Zalgiris, which also had Ty Lawson on their squad, started the season with three losses in a row and now is at the bottom of Group B.

RealGM presents Weems’ first interview in Europe about why he went overseas, why he picked Europe instead of China and his impressions on Lithuania [before somebody stole his Xbox].

ReaGM: First of all, when did you start thinking about going overseas?

Weems: In the middle of [last] season when everybody started talking about the lockout, my agent and I came together and discussed options of maybe coming over here but we did not come to a conclusion. But this summer when we saw that the lockout might last long we kind of came together and made our decision. As you can see now, I am playing for Zalgiris.

RealGM: Why did you decide to sign with Zalgiris Kaunas?

RealGM: Did you have any other options?

Weems: I had other options but to my agent and myself, Zalgiris was the best team for us. And we chose that.

RealGM: Did you talk with your former teammate Linas Kleiza about signing with Zalgiris and coming to Lithuania?

RealGM: Why did you decide to come to Europe instead of moving to China?

Weems: China is like playing junior basketball. You go over there and average 40 points per game and you don’t get any better. That’s the league I do not want to be a part of it because basically there play only Chinese guys. I want to play where the competition is going to be. That’s why I chose Zalgiris.

RealGM: What was the first reaction from your family when they found out you were going overseas? Did you have to show them on the map where Lithuania is?

RealGM: What was your first impression about Kaunas and Lithuania?

Weems: Quiet city, very quiet. People here are really passionate about basketball. I didn’t expect it, but people knew me before I came here. They knew who I was. I’m very proud to be a part of that basketball tradition.

RealGM: You were one of few players who signed a contract in Europe without an NBA-out.

Weems: I think it’s better for me. If you look at the NBA, a lot of owners, a lot of GMs are focused on European players. They are really focused on the game over here.

Weems: The only difference here is the game is a lot slower. Also, instead of one practice a day you have two. Maybe one day you are like “why I am here”, but that’s the way they do things over here. That’s something I have to deal with. I chose to be over here; therefore I have to deal with it.

RealGM: Do you miss the fastpaced NBA style basketball?

Wemms: It’s fine, I can slow myself down. It just makes me improve my halfcourt game. Like I said, playing over here will help me a lot.

RealGM: As you know, some NBA guys have already left for home. Have you felt homesick?

Weems: I miss my family but I can put them on the plane. That’s not a problem for me. Actually, my mom and dad are coming over here.  I’m very excited about that.

RealGM: Do you keep in touch with guys from Toronto?

Weems: Always. I’m going back there next year. They are my friends so I have to keep in touch with them.