Pacers Conquer Tough Road Swing, Get Two When They Had Three 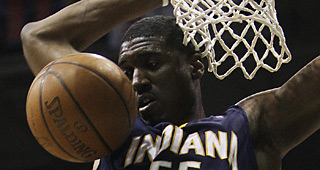 The Indiana Pacers handled the first portion of a tough road stretch, winning two out of three games on the West Coast, to improve their overall mark to 11-4 this season. They needed 21 games to get to 11 wins last season and they dropped seven of nine after hitting the plateau in December of 2011. They aren’t out of the woods yet, though, as seven of their next ten are on the road.

The road trip, which included stops in Sacramento, Oakland and Los Angeles, could have resulted in a sweep had the Pacers showed up in the fourth quarter against the Kings last Wednesday. Instead, they needed a key play from George Hill and a heroic effort from Roy Hibbert to avoid a losing trip.

Through three quarters, the Pacers dominated the Kings. They took an 80-66 lead into the fourth and even after Sacramento’s late rally they dominated in most statistical categories.

The Kings shot just 30.1% from the field and the rebounding battle was even overall. Indiana did get into trouble by not keeping Jason Thompson and DeMarcus Cousins off the offensive glass. The duo combined with grab 18 offensive boards, which was just as many as the Pacers had as a team.

Sacramento took an 88-87 lead with 2:19 left in regulation on the second of two successful free throws from Francisco Garcia. Their largest lead of the game was their four-point edge in the final score, 92-88. It wasn’t as though Frank Vogel made a tactical error either, there was always at least one starter on the floor and he brought the charges (Danny Granger and Davis West at 9:47, Darren Collison at 8:42 and then Hibbert in at 8:03) back into the fold with a six-point lead and significant time remaining.

The lineup that saw eight points shaved off the lead – George Hill, Dahntay Jones, Paul George, Tyler Hansbrough and Lou Amundson – has been great in stretches this season. They helped keep Indiana within striking distance against the Lakers on Sunday night.

No matter who is on the floor, it’s hard to win a basketball game when you score six points over the final ten minutes. It’s not that the Kings exploded offensively, which you would figure they’d have to do in order to overcome a 14-point deficit, but Pacers scored just eight points on 18.8% shooting and committed eight turnovers in the quarter. They attempted 16 shots, thanks to their unsightly turnovers, and were just 2-for-4 from the foul line. With a double-digit lead in the fourth quarter, you have to attack the basket and get to the line.

This game had the makings of another late-game disappointment, but Hill saved the road trip with a key defensive play against Monta Ellis (thanks to a fine sneaker selection).

Ellis, who was 11-for-20 with 25 points in the game, initiated an isolation play against Hill at the top of the three-point line and he has crossed over from right-to-left, Hill “stepped” into his way and stole the ball. He then streaked to the basket for the game-winning layup. Stephen Curry did a good job getting back on the bang-bang play, but didn’t do a good enough job of preventing Hill from getting off an attempt.

These are the types of plays that wouldn’t have gone this team’s way in recent years for a couple of reasons. They didn’t have the perimeter defense capable of keeping a guy like Ellis from getting a shot off and it would have been more likely that the opposing team would get away with the play that Hill did.*

This game looked lost in the first quarter, when the Lakers took a 27-14 lead after twelve minutes. It wasn’t quite as bad as the fourth period they put together in Sacramento, but it certainly wasn’t promising. The Pacers shot 6-for-22 from the field and turned over the ball five times.

Hibbert suffered an apparent broken nose when he fouled Kobe Bryant with 6:46 left in the first quarter. The center missed about 12 minutes of game time before he returned with cotton stuffed up his nose. At one point in the fourth, Hibbert scored six consecutive points to cut L.A.’s lead to one. He finished with 18 points and eight rebounds in just 27 minutes.

Including a 35-point explosion in the second, the Pacers outscored the Lakers by fifteen after their dreadful first period. It’s a common problem, but they have to try to avoid these potential back-breaking quarters. They played 36 solid minutes against the Kings before losing it over the final twelve. Had they not closed out their win over the Lakers, the first quarter would have been to blame.

The Pacers scored 105.8 per 100 possessions in the three games, highlighted by a 115.4 effort against the Lakers (which shows you how good they were after the first quarter). They allowed 102.8 points per 100 possessions and they were steady over the trip. Both numbers were up a bit in comparison to their season numbers, so they even out. If anything, it’s good to see their offensive rating increase a bit.

The one other thing I noticed over the three games is that the Pacers didn’t attack the basket often. The Kings and Lakers were both +14 in free throw attempts and none of the three games had a finish that lent itself to needless attempts in the final minutes.

On the season, Indiana is averaging 25.5 free throw attempts per game (tied for ninth), so it may have been a case of three road games, a lot of travel and perhaps a lack of energy in the two troublesome quarters mentioned.

*Yes, I wrote that entire section without actually saying that Hill kicked the basketball. Replays be dammed.