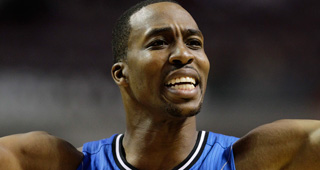 The Los Angeles Lakers were thought to be the team Dwight Howard favored most when he requested a trade from the Orlando Magic. While the Lakers were easily the team Howard thought about most in the summer, his desire to play for the Lakers changed after a conversation with Kobe Bryant, a source said.

Howard envisioned going to the Lakers and forming a devastating one-two punch with Bryant. But Bryant had other plans for how Howard would be incorporated into the Lakers.

Bryant told Howard that he wanted him to come to Los Angeles and help him win two more championships, but not as an understudy. He wanted Howard to be the team's third option behind himself and Pau Gasol, according to a source. Bryant tried to sell Howard on being his "Tyson Chandler" and made it clear that Los Angeles would be his, but only once Bryant decided he was done playing.

Howard was turned off by the idea.

Howard stated that there was "no way" he would give up everything he has in Orlando to go to the Lakers and be the third option, a source close to the situation said. Howard certainly wouldn’t mind being a third piece on a star-studded team, similar to the situations in Miami and Boston. However, he was turned off by Bryant's presentation as it suggested something totally different.

The feeling is so strong, in fact, that Howard's representatives have informed the Lakers that Howard would not sign an extension if they trade for him this season, according to a source. The only two teams with a realistic chance at signing Howard long-term are the New Jersey Nets and Orlando Magic.