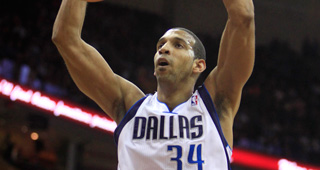 When the Dallas Mavericks signed Brandan Wright this offseason, there was no guarantee he would make their team out of training camp. After four years in the NBA, the 6’10, 210 forward had given little indication that he was even worth a roster spot.

But Dallas looked past his meager statistical production and lengthy history of injuries to see the combination of size, skill and athletic ability that made the Golden State Warriors choose Wright with the No. 9 pick in 2007. Now, with Wright looking capable of taking the starting center job away from Brendan Haywood, his renaissance shows why NBA teams are willing to give so many chances to 6’10+ players.

Wright averaged only 24 games per season in his first four years with Golden State and New Jersey, struggling through a myriad of injuries and missing the entire 2009-10 season due to shoulder surgery. As a result, he could never crack the rotation of some of the worst teams in the NBA, putting up career averages of less than five points and three rebounds.

It’s not like he blew the doors off in his one season at North Carolina either, where he averaged 15 points and six rebounds for a Tar Heels team that advanced to the Final Four the year after he left. And after making over $10 million in the NBA, he seemed like the poster child for the problem with valuing potential over production.

However, the potential was still there: Wright has a 7’4 wingspan, a 35 inch vertical and a soft lefty touch (career 70.1% free-throw shooting percentage). He was a McDonald’s All-American in high school who was ranked No. 3 in the class of 2006, ahead of players like Thaddeus Young, Ty Lawson and Brook Lopez.

Wright has shown glimpses of his talent throughout the 11-12 season, but it wasn’t until Haywood’s latest injury that the Mavericks coaching staff let him loose. In Dallas’ last two games, both against the Houston Rockets, he has been dominant: 14 points, six rebounds and seven blocks on 7-9 shooting on March 24 and 13 points and seven rebounds on 6-7 shooting on March 27.

Unlike most big men, he has an excellent feel for the offensive side of the floor. He has good hands and good footwork, so when guard dumps him the ball off penetration, he’s actually capable of finishing in the paint. He has the lowest turnover percentage (8.2) on the team, far lower than Haywood (14.6) and Ian Mahinmi (13.7), both of whom are as likely to travel or fumble the catch when given an interior pass.

His per-36 minutes averages (15.6 points, 7.5 rebounds and 3.4 blocks on 62% shooting) have been stellar all season, so there’s no reason to think his recent success would tail off significantly if he continues to receive 25-30 minutes a night in Dallas. With excellent passers throughout the roster and Dirk Nowitzki drawing the majority of defensive attention in the frontcourt, Wright should be able to thrive offensively at the center position.

His lack of bulk will be a problem against true low-post centers, but they are a vanishing breed in the modern NBA. Unless the Mavericks play the Lakers (Andrew Bynum) or Grizzlies (Marc Gasol), Wright’s length and activity will let him survive in one-on-one matchups while making him a far superior help-side defender to the floor-bound Haywood, whose block percentage (3.9%) is barely half of Wright’s (7.4%).

Wright is a classic replacement-level player: a player who can’t create his own shot, but is capable of surviving defensively at an NBA position and finishing efficiently when left open. The difference is, if he were 6’9 or shorter, there would be dozens of free agents in the D-League and Europe capable of filling in for him.

Because of the scarcity of 6’10+ athletes in the world, Wright has gotten chance after chance to prove his worth in the NBA. That’s why the Mavericks have a second 7’0 project from the 2007 draft (Yi Jianlian) on their bench as well as another (Sean Williams) they carried for most of the season. In contrast, Acie Law, Al Thornton, Julian Wright and Morris Almond, 2007 first-rounders who have already washed out of the NBA, will have an extremely tough time making it back, since there is a surplus of perimeter players in every draft class.

There’s almost no chance the Mavericks don’t exercise Wright’s $950,000 team option for next season. If he can keep up his 21.8 PER over the next year and a half, his minimum salary will be one of the biggest bargains in the NBA. Regardless of where he ends up next year, at only 24-years-old, most of his career is still far ahead of him.

His emergence is one more example of a highly-touted high school player eventually playing up to his talent level in the NBA, and it should make general managers even more interested in raw and athletic young big men, no matter their level of production. If Wright can turn himself into a legitimate NBA player, perhaps there is still hope for Greg Oden, another 6’10+ McDonald’s All American whose inability to stay healthy has made him one of the biggest busts from the 2007 draft.

One thing is certain: if Oden wants to give it another chance, some team will give him one. In the NBA, if you’re going to miss, you’re better off missing big.