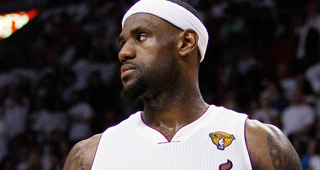 "If two guys are on you, a teammate is open," James says. "It's four against three, easy math" ... James recoils when he sees a player rise up for a long jumper over three defenders. He beams when his 7-year-old son, LeBron Jr., dishes to a forgotten kid. -- Sports Illustrated

In Games 2 and 3 of the NBA Finals, Mario Chalmers shot 2-for-15 from the floor and 1-for-6 from three. In Game 4, he missed his first two shots, both wide-open 3's setup by passes from LeBron James.

Chalmers was ice cold, a shooter whose jumper had abandoned him at the worst possible time. Despite being the Miami Heat's nominal point guard, Chalmers rarely plays with the ball in his hands, so when he's not stretching the floor, he's not bringing much to the table. But LeBron never lost faith, passing him the ball whenever the Oklahoma City Thunder left him open on the perimeter.

Chalmers certainly wasn't going to lose confidence in himself; at Kansas, he was the player making decisions with the ball in his hands at the end of games. When the Jayhawks needed a three-pointer at the end of regulation in the 2008 NCAA championship game, they ran the play for Chalmers, who hit one of the most dramatic shots in tournament history to tie the game.

But despite his collegiate heroics, Chalmers slipped to the No. 34 selection in the 2008 NBA Draft. He's an average sized point guard (6'1 190) whose neither a great athlete nor a natural playmaker. His strength is as a shooter and a secondary scorer, which means he couldn't start for most NBA teams who need more from the position offensively.

In that way, he's fairly similar to Derek Fisher, a point guard who rarely handled the ball while winning five championships with the LA Lakers. Nor is he the first second-round guard who became a playoff hero spotting up off LeBron. Daniel "Boobie" Gibson scored 31 points for the Cleveland Cavaliers in Game 6 of the 2007 Eastern Conference Finals and turned that performance into a $21 million contract.

Playmaking, more than even scoring or defense, is what makes LeBron special. At 6'9, 265, he has the athleticism of a shooting guard, the body of a power forward and the floor vision of a point guard. And on Tuesday night, he put it all together in a performance for the ages.

While LeBron isn't a bad jump-shooter, it's not the most efficient shot he could take. The rest of the Heat players, besides Dwyane Wade, were acquired for their jump-shooting ability, so when LeBron takes a contested jumper, he's negating his teammates strengths. And when he attacks the paint, he puts defenses in an incredible bind; unlike most elite scorers, LeBron wants to be doubled so he can read the defense and find the open man.

The biggest change in his game from the 2011 Finals is how he is attacking the paint. He's playing more with his back to the basket, the easiest way to exploit a smaller defender. LeBron spent the vast majority of Game 4 overpowering Kevin Durant, Thabo Sefolosha and James Harden, none of whom have the strength to prevent him from establishing post position. Whether it was face-ups, hook shots or spin moves, he went 8-for-11 on field goals near the rim.

After Oklahoma City raced out to a 27-12 lead to start the game, he quarterbacked a lightning-fast comeback from the post. In four minutes, he created 14 points without scoring: finding Norris Cole for two 3 pointers, Wade on a breakaway and James Jones for a 3. It was beautifully efficient basketball: either LeBron would score in the paint or he would command a double team and create a wide open 3 pointer for a teammate.

While Russell Westbrook was just as dominant offensively, most of his 43 points came off 1-on-1 moves. He can get his own shot off at will; the next step for him as a player is leveraging that ability to create more open shots for his teammates. Of course, it would help if he were surrounded by jump-shooters like LeBron.

Playing on a team designed to maximize his abilities, LeBron made the right decision almost every single time down the floor. It was a scary view of what the next decade of the NBA could look like: LeBron rolling through the high post as a freakish hybrid of Magic Johnson, Karl Malone and Michael Jordan.

The Thunder, down 3-1, still have some cards they could play if Scott Brooks is willing to significantly tighten up his rotation. He can't afford to punt away offensive possessions with Kendrick Perkins and Derek Fisher taking tough shots, not when the Heat have given him a nearly intractable dilemma on the other end of the floor: LeBron posting up or Chalmers, Jones and Shane Battier getting open shots from beyond the arc.