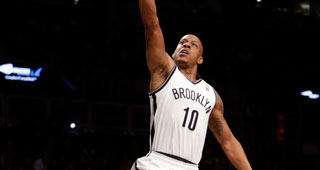 MILWAUKEE – For a brief moment last offseason, coming back to the Chicago Bulls looked like a realistic possibility for Keith Bogans. Behind his relationship with Tom Thibodeau, Bogans had a strong advocate within the Bulls, and privately the coach pushed management over the summer to bring back Bogans.

Bogans never communicated with Thibodeau about a potential return, but he told RealGM that his agent, Dan Fegan, talked to the Bulls’ front office during the offseason. Ultimately, Bogans believed re-signing with the Brooklyn Nets fit him best and the Bulls acquired Marco Belinelli.

Bogans admits the respect between he and Thibodeau remains strong, but as he said after the Nets’ loss to the Bucks on Wednesday night: “That was about it, though.”

Now, the Nets are using Bogans as an integral part of their rotation, counting on his perimeter defense and outside shooting. He made his 10th start of the season on Wednesday and scored 11 points and grabbed five rebounds in 30 minutes.

There’s a newfound enjoyment on the court for Bogans, and it stems from remembering when doctors told him last season that the complete tear of his deltoid ligament – on top of a fractured left ankle – would not only finish his year, but most likely end his career.

“It’s a lot of fun for me,” Bogans said. “It’s not fun losing; we’re in a little rut right now. But for me, just to be back playing – it’s probably a little different for me. To be able to come back and still be out on the court and play, it’s definitely a good feeling.”

While Bogans is excited to be back in the playoff hunt after missing most of last season, he knows this is a critical time to see whether the Nets are mentally strong. After an 11-4 start to the season, Brooklyn has lost 10 of its last 13 games and is barely holding onto the eighth seed at this point.

“I think, man, it’s early,” Bogans said. “That’s the good thing about it: It’s early. We’ve got struggles early in the season so we got time to fix it. Either we fix it or we fall apart, but I think with the group we have, we’ll come together.