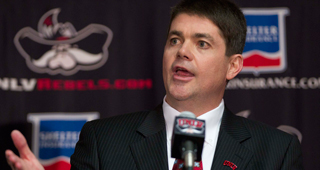 This weekend it was announced that rising UNLV sophomore Katin Reinhardt would be transferring. While Reinhardt received plenty of playing time under UNLV head coach Dave Rice (even when he probably should have played less), Reinhardt wants to be a point guard at the college level in order to improve his NBA Draft stock. Rice couldn’t promise him playing time at that position and Reinhardt is leaving as a result.

That is eight former Top 100 recruits. Only four teams (Kentucky, Kansas, Duke and North Carolina) have more than eight former Top 100 recruits on their roster heading into next season. In other words, UNLV might not quite have enough talent to compete at the very highest levels of college basketball, but there are very few teams that should be able to run UNLV off the floor with their athleticism.

(This list doesn’t include Carlos Lopez-Sosa and DaQuan Cook, who will also likely see some playing time next year.)

John Calipari gets a lot of criticism for his talent-first approach, but the reason it works is he gets the players to buy into the team concept. Calipari gets his players to believe that by making each other better, they will be better in the long-run.

For many of the players on UNLV’s roster, often labeled the land of misfit toys because of the transfer culture, they may have left other schools because they thought it was in their personal interest. But now they have to prove that they can contribute to a winning team.

Almost no one thinks UNLV will be better than last year. The Runnin' Rebels lost Anthony Bennett to the NBA draft. They lost a vital 4-year player in Anthony Marshall. They lost Mike Moser to transfer. And that is why UNLV isn’t showing up in most people’s Top 25 rankings for next year.

Meanwhile, my model is equally pessimistic. After finishing with the 42nd best margin of victory numbers last year, the model projects them to be slightly worse on offense and defense which would actually put them outside the NCAA tournament field at this point.

Part of the reason is that my model isn’t in love with Dave Rice. Yes, he has had his moments. His win against North Carolina two years ago was one of the biggest of the entire 2011-12 season. And he has earned some pretty good seeding in the NCAA tournament, even last year. But when it comes to grinding it out, possession after possession, he hasn’t been able to do what the other teams with this type of talent typically do. The model doesn't completely respect him as a coach.

But this is the kind of season where Rice can absolutely earn some respect by winning games. That is because, among the returning Top 100 talent, only two of the players posted ORtgs over 100 in their last stop. Here are their most recent D1 ORtgs:

Keep in mind that Roscoe Smith only used 14 percent of UConn’s possessions in his last season. He only shot when wide open, suggesting his 106 ORtg is less impressive. With the high ceiling for all these guys, almost certainly a few of them will develop. But Rice’s biggest challenge will be making sure that if someone is taking too many bad shots, that within the team unit, they can make the proper adjustment.

Recruiting athletic players is only half the battle. Getting talented players to buy into the team concept takes real work.