The Potential Rebirth Of Greg Oden 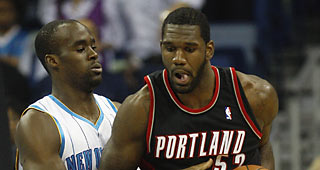 Greg Oden was projected to be the first overall pick in the 2007 NBA Draft from the moment the one-and-done rule was changed to make the 2005 high school class the last to go directly to the pros. Simply, Oden was the best player in the draft at basketball's most important position, drawing comparisons to David Robinson and Bill Russell.

Oden's size and athleticism made for a really great one-two punch. Add in his ability to run the floor really well, his dominance on the defensive end, his ability to rebound and block shots, his soft hands and real nice touch from the inside, a developing jump-shot and a great passer out of the post and you’ve got yourself a really nice piece of you’re selected first overall.

The Portland Trail Blazers were fortunate enough to select him and pair him up with Brandon Roy and LaMarcus Aldridge, on paper anyway.

An injury-plagued career never allowed Oden to settle and really show the world what he could do. He played his last game on December 5, 2009, having fractured his left patella in a win against the Houston Rockets.

Three-and-a-half years of recovery, rehabilitation and training have given a young 25-year-old Oden another chance to prove his worth.

Gregg Popovich would love to have a healthy Oden on his roster. It would be ideal to be able to play him 15-18 minutes a game during the regular season in order to give aging Tim Duncan a rest. He would provide the Spurs with a defensive presence on the inside, piling up a few blocks and altering shots, while finishing near the basket on the offensive end if need be.

The reigning champion Heat would love to have a healthy Oden on their squad, as they are in dire need of size. The Indiana Pacers really pushed the Heat to their limits by playing big and physical. Teams understand that this is their best shot to beat Miami in a seven-game series. If Oden can really mesh with the Heat on the defensive end and move his feet quickly to keep their rotation working properly, he would help solve some of Miami’s issues against bigger teams.

The Cavaliers are quite flexible in terms of their rotation now that they have Anthony Bennett who can play small forward and power forward. They also have Tristan Thompson who can play either the four-slot or the five-slot, as well as Sergei Karasev who can slide between shooting guard or small forward. A dozen minutes from Oden when they want to play big would be a great help for them. Of course, Anderson Varejao would still see the bulk of the minutes at center.

Danny Ainge has the Celtics in full rebuild mode after having traded Kevin Garnett and Paul Pierce away to the Brooklyn Nets, as well as having let go one of the best coaches in the league in Doc Rivers. Kelly Olynyk was selected 13th by the Dallas Mavericks and was sent to the Boston Celtics. A 7’0 with a great post-move repertoire and range in his shot should do the Celtics well. However, he is not a great defensive force and this will hurt Boston on the inside. Oden could come right in and play about 15-18 minutes like he would for the Spurs in order to help the Celtics out defensively. His imposing presence would do them some good and would have teams thinking twice about attacking the rim.

Mike Conley is one of Oden’s closest friends, having played with him back at Ohio State. However, in terms of need, the Grizzlies are probably the team that are in less need of his services when compared to the other four. Yes, Oden would be able to come in and help them out defensively like he would any other team, but with the acquisition of Kosta Koufos from Denver in exchange for Darrell Arthur, Memphis now has another 7-footer other then Marc Gasol in the lineup whose presence helps their paint-defense.

If we were to rank these five destinations in terms of desperation for this big man, it would probably be something like this: Miami, San Antonio, Boston, Cleveland, Memphis. One could argue for Boston to overtake San Antonio as the team most “desperate” for him after Miami, but the Celtics have another big guy in Fab Melo, a 7’0 center selected 22nd in the 2012 draft. He is known for his defensive prowess, having been named the Big East Defensive Player of the Year in his sophomore season at Syracuse.