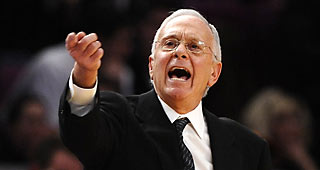 When Larry Brown left the Charlotte Bobcats in the middle of the 2011 season, it looked like a sad ending to a legendary career. Charlotte had been his fourth NBA head coaching job in eight years, a testament to both his brilliance and his uncanny ability to wear out his welcome. Turning 70 had not mellowed him. Brown was still feuding with players, getting into power struggles with the front office and burning every bridge on his way out of town.

The NBA wrote him off, but Brown couldn’t leave the game behind, the game needed him. He became a college coach, returning to the NCAA for the first time in 25 years. In 2012, he took over as the head coach at Southern Methodist, one of the most hapless programs in Division I basketball. It was the ultimate marriage of convenience. Brown needed a job and SMU had nothing to lose. One year later, it looks like a brilliant decision for both.

A private school in the middle of Dallas, SMU had fallen off the map since the breakup of the Southwest Conference in 1996. While their rivals joined the Big 12, the Mustangs spent the last two decades in the WAC and Conference USA. The school is known mostly for its football team getting the death penalty in the late 1980’s. They made the NCAA Tournament only once in the last 25 years. Before Brown’s arrival, the basketball program was not relevant.

However, in spite of its struggles, SMU has always had the potential to be a much better program. It is located in one of the deepest pools of basketball talent in the country. Last season, there were 11 players from the Dallas-area in the NBA, including Deron Williams, Chris Bosh and LaMarcus Aldridge. The pipeline shows no signs of slowing either, with six McDonald’s All-Americans in the last four years and two of the top-5 players in the class of 2014.

Just as importantly, there’s no dominant local power to contend with. Dallas is a pro sports town in a football-crazy state; local basketball players dream of playing in the NBA, not the NCAA. The University of Texas, the most prestigious “local” school, is 300 miles down the road. As a result, coaches from all over the country have been able to dip into the area for talent. Williams played college ball at Illinois while Bosh wound up at Georgia Tech.

In the last few years, Baylor and Oklahoma State have turned themselves into Top 25 programs by recruiting the Dallas area. Before Scott Drew came to Waco in 2003, Baylor was in worse shape than SMU. The Bears' turnaround has been built on Dallas-area players like Quincy Acy, Perry Jones III and Isaiah Austin. Last season, three of Oklahoma State’s top four scorers -- Marcus Smart, LeBryan Nash and Phil Forte -- were from the Metroplex.

Nevertheless, there are questions about both programs going forward. So far, Drew and Travis Ford have been better at recruiting than coaching. Last season, the Bears missed the Tournament despite having three future NBA players in their starting five. The Cowboys, who had as much NBA talent as anyone in the country, were knocked out in the first round. Neither coach has been able to get the best out of their players, whose draft stock has suffered as a result.

On the court, a mediocre college coach going against Larry Brown isn’t even fair. Brown is the only coach in basketball history to win an NBA and an NCAA title. His 2004 Detroit Pistons are the only NBA champion in the last 30+ years without a first-ballot Hall of Fame player. The last time he was in college, he coached “Danny Manning and the Miracles” to the 1988 NCAA championship, one of the most remarkable runs in Tournament history.

The big question was whether Brown would be able to recruit the talent necessary to win. Instead, his Hall of Fame credentials have made him a huge draw. After muddling through a 15-17 debut season with Matt Doherty’s players, Brown is bringing in an excellent four-man recruiting class next season. The centerpiece is Keith Frazier, a McDonald’s All-American shooting guard. There’s also Yanick Moreira, a four-star center from the junior college ranks, and Shannon Brown’s younger brother.

Brown took it to a whole different level over the weekend, when he secured a commitment from Emmanuel Mudiay. A top-5 player in the Class of 2014, Mudiay is the most high-profile recruit in school history. The other finalists were Baylor, Oklahoma State, Kansas and Kentucky. Beating out John Calipari, who is suddenly scrambling for a point guard in 2014, and Bill Self, coming off a victory in the Andrew Wiggins sweepstakes, sends a strong message to future recruits.

Mudiay, an athletic 6’4 PG from Dallas who has drawn comparisons to John Wall, could be the domino that turns SMU into a national power. In the modern game, nothing attracts stars like stars. Myles Turner, the No. 3 player in the country, is now set to make an official visit. In 2014-15, a team with Mudiay, Frazier and Turner could play with anyone. Put Larry Brown in a one-and-done basketball tournament with equal talent and anything is possible.

The Mustangs aren’t in a BCS conference, but that isn’t as much of a problem in basketball, where mid-major programs like Gonzaga can become national powers. SMU’s ceiling is probably Memphis, one of the other schools in the newly created American Athletic Conference. While the Tigers have one of the most passionate fan bases in the country, the school doesn’t have any more financial resources than SMU, the location of the new George W. Bush Presidential Library.

For Brown, the college game might be a much better fit than the NBA. As a college coach, he serves as his own GM. There’s no front office to clash with and the roster turns over almost every year. There’s also less time for Brown to wear out his players, since the best only stay for 1-2 seasons anyway. He’s always thought of himself as a teacher of the game and college players, as a rule, are going to be more interested in learning than those in the professional ranks.

The number of people Brown has influenced might be the most impressive part of his legacy. He is a coach of coaches. The staff’s from his Kansas teams in the 1980’s are like a Who’s Who of the basketball world: John Calipari, R.C. Buford, Gregg Popovich, Bill Self, Alvin Gentry, Mark Turgeon. If we are all standing on the shoulders of giants, Brown is one of the giants of 20th century basketball. Most of the coaches in the AAC aren’t going to know what hit them.

Of course, that all depends on Brown staying in place for at least three seasons. At the age of 73, there’s no telling how much time he has left in his career, even without taking his notorious wanderlust into account. However, a few deep runs in the Tournament could transform the SMU program, one of the sleeping giants in the college game. It would be a fitting capstone to the career of one of the greatest coaches in basketball history.