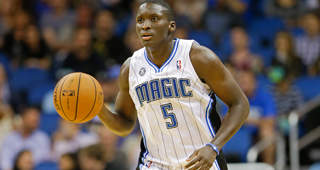 One of the most explosive and athletic swingman to come out of the 2013 NBA Draft class has been Victor Oladipo. Leading up to the draft, there was no question that Oladipo was a top-3 pick—and even talk as the top overall selection. Drafted second overall by the Orlando Magic, Oladipo had analysts dubbing him as the preseason favorite to win the Rookie of the Year award…that was until Michael Carter-Williams came out and took the league by storm to start the season.

Despite fellow Rookie of the Year candidate Carter-Williams seemingly coasting through the season as the favorite, Oladipo has shown that he should be more seriously considered for the award. Listed at 6’5” with a 6’9” wingspan, Oladipo creates mismatches with his lanky frame against opposing point guards. His explosive first step allows him to blow by most two-guards and get to the paint with relative ease. The Sixers recent losing streak of 25—tied for the longest all-time losing streak with the 2011 Cavaliers—should be a major detrimental factor against MCW’s bid for the award.

Comparing both Oladipo and Carter-Williams on a statistical spectrum would be misleading. Oladipo currently averages 14.0 points, 4.3 rebounds nd 4.2 assists while playing just less than 32 minutes per game. On the other hand, Carter-Williams plays at almost 35 minutes per game and averages 16.5, 6.1, 6.3, respectively. The Sixers currently lead the league in pace at 102 compared with the Magic who falls in at 96.1, ranked 16th in the league. With the uptick in both minutes and possessions per game for MCW, it is evident to see why his numbers look more impressive than Oladipo’s on the surface.

Additionally, the durability of a player should factor in for individual player awards. Numbers are most misrepresented when we do not get an accurate look at the quantity of total games played. While Carter-Williams has been missing games left and right throughout the season (due to knee issues), Oladipo played in the first 62 games of season, a feat none of the other top-5 picks could accomplish.

For the most part, injuries have kept the Magic from being more competitive in the Eastern Conference—as they sit at 21 wins with eight games left to go. However, through Orlando's rebuilding season, steady improvement has shown between the synergy of Oladipo and big man Nikola Vucevic.

“Early in the year, we couldn’t really get it together as far as pick-and-rolls and stuff like that, which is normal,” Vucevic tells Orlando Sentinel beat reporter Josh Robbins. “It just takes time, a lot of practice, a lot of work. I think now we have a pretty good chemistry pick-and-roll-wise when he drives…So it’s great. I think it’ll be huge for us in the future.”

Looking more in-depth at Oladipo’s play gives us a better idea of what sort of player Oladipo is. About 44 percent of Oladipo’s plays are run through as the pick and roll ball handler per Synergy Sports. He converts at a 0.77 PPP and shoots at an anemic 39.5 percent clip when running the play. On the defensive end, he gives up a similar 0.78 PPP rate when defending the opposing guard so he does make up for some of the offensive deficiencies with his defense. These numbers are nowhere where they should be for a future star but if Oladipo wants to take the next step, he must learn to develop a more consistent mid-range and perimeter jump shot.

According to NBA.com, about 43 percent of Oladipo’s 859 field goal attempts have been within 5-feet of the rim—where he converts at a 52 percent clip. Outside of 5-feet, he shoots just 32.6 percent from the field—including 9-for-40 between 5-9 feet. In order for Oladipo to continue to progress to the explosive star that many potentially see him as, he must learn to become more decisive and finish stronger around the rim.

At this juncture of Oladipo’s rookie year, we can see that he has no problems getting to the rim given his unmatched quickness and impressive athleticism. However, Oladipo must learn to control his body more when he finishes around the rim. ESPN Insider’s David Thorpe compares Oladipo’s slashing cutting game to that of Dwayne Wade’s.

“It’s the craft part that Oladipo needs to study the most – seeing when to speed up, when to slow down, when to try the Euro-step, etc. – because finishing at a high level requires more than just jumping high when you are shorter than 6-foot-6. Recognizing opportunities to race is also a Wade specialty, something Oladipo often misses out on in games.“

Despite these holes in his game, Oladipo should clearly be getting more recognition from around the league and the media as the 2014 Rookie of the Year. Certainly MCW has had an impressive campaign himself, but it has got to be tough to evaluate his rookie campaign given the Sixers’ D-League roster.