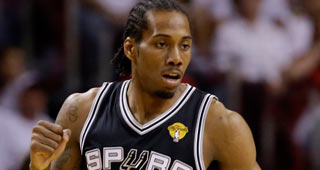 - The following is an excerpt from Jonathan Tjarks' e-book about the NBA Draft that can be purchased for just $3.99.

The key to evaluating young basketball players and how their game will translate to the NBA is developing a universal framework that can be applied to every prospect. There’s too much room for subjectivity if you are doing it on a piecemeal basis and trying to figure out whether every 18 and 19-year old has “it”. Every once in a while there will be a guy who breaks your model, but you need to have an underlying foundation from which you are making exceptions from.

In that respect, talent evaluation is like learning to paint - before you can start coloring outside the lines, you need to know what the lines are for. So much of what happens in the college game (and to a lesser extent in the top international leagues) has little bearing on the NBA game. It’s the highest level of the game – the best NBA players are bigger, faster and more skilled than anyone else in the world.

I like the metaphor that Fran Fraschilla uses on ESPN – the NCAA is A or AA and the NBA is the big leagues. In A ball, a pitcher can blow by guys with just a fastball. He doesn’t need secondary pitches. However, when you start going against the best of the best, that isn’t going to cut it. At the lower levels of the game, it’s not what you are doing but how you are doing it.

When evaluating position players, baseball scouts look for five different tools – the ability to hit for average, hit for power, run the bases, throw the ball and field a position. The more tools the player has, the more likely he will be a major-league contributor. In the scout’s mind, all five exist on a pendulum. If a player is lacking in one tool, he needs to balance it out by excelling in another.

You can create a similar framework for basketball, based on the five basic things a player can do in a game:

1) Create his own shot

This is the most difficult thing to do at the NBA level. The defenders are bigger, stronger and faster and they know your game inside and out. There are no secrets – the book on a guy’s strengths and weaknesses gets around very quickly.

The distribution of shots on a team is zero-sum – if one guy has the ball in his hands, someone else doesn’t. That’s why the best player on a college team isn’t necessarily its best pro prospect, since very few players are given the chance to dominate the ball early in their NBA career. If you can’t create your own shot at an elite level in the NBA, you had had better be able to do something else.

2) Create a shot for someone else

This is what separates the good from the great players on offense. A lot of guys can throw up shots, but few can command double teams and read the defense well enough to make the correct pass off the dribble. The smaller a player is, the more important they be able to pass – unless you are Allen Iverson, it’s hard to have a big career as a 6’1 shoot-first player.

Passing is the most intuitive of all the tools. It requires spatial intelligence - the ability to read the defense, have a feel for the flow of the game and see the play develop before it happens. You have to think the game, which is really hard to develop once you are in the NBA. It’s not just a matter of racking up assists – you have to be able to do it without turning the ball over.

3) Shoot the ball off the pass

Shooting is the most important skill for a role player (read: a guy who can’t create his own shot) to have. If you aren't going to get your own shot, you had better be able to shoot. If a guy can't shoot, he can't threaten the defense without the ball in his hands. Even the big men have to shoot these days. With quasi-zone defenses all the rage, an offense has to have enough shooters to prevent the defense from packing multiple defenders in the paint.

Shooting is another thing you have to develop early in your career. Every year there are a host of college guys who would be really good NBA players “if only they could shoot”. It happens, but not very often. In recent years, the only guys I can remember developing a three-point shot in the NBA are Kawhi Leonard and Lance Stephenson.

The bigger you are, the more important it is that you can rebound. In that respect, it is the converse of passing, which becomes more important the shorter you are. At the same time, guys who can flip that dynamic – big men who can pass or guards who can rebound – are very valuable.

A tall player who can pass can see over the defense and his height can create easy passing angles in the half-court. A smaller player who can rebound can start the fast break himself and can take advantage of all the guards who don’t know how to box out.

This is where push comes to shove for most young players. All the talk of the “position-less” NBA is true to an extent, but you still have to defend someone. There is no DH in basketball. Every player on the court has defensive responsibilities and if they can’t meet them, it puts everyone else in a bind.

Defense is where physical tools really come into play. It’s all well and good to know the game, but if you aren’t big enough, fast enough or strong enough, it’s not going to matter. NBA veterans – guys who stick around long enough to get a second contract in the league – get paid the big bucks precisely because they can exploit guys who can’t match up with them physically. If they couldn’t, they wouldn’t be in the league for very long.

It’s very hard to hold down a starting spot in the NBA if you can’t defend your position. There are guys who are good enough on offense that it doesn’t matter – Dirk Nowitzki, Kevin Love, Steph Curry – but there aren’t many of them. They are the exceptions that prove the rule. Nowitzki and Curry are two of the greatest shooters in the history of the sport while Love is the rare big man who is a plus shooter, rebounder and passer.

- This was an excerpt from Jonathan Tjarks' e-book about the NBA Draft that can be purchased for $3.99.