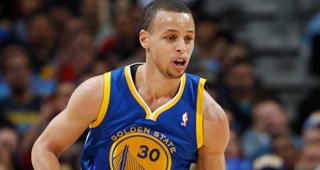 Presumably inspired by the rumors of discussions on a David Lee and Harrison Barnes for Tyson Chandler trade, Evan Zamir tweeted an idea that got my brain chugging.

The question I eventually settled on: Could the Warriors clear enough space to sign two max players in 2015 while keeping Stephen Curry?

When presented with a hypothetical like that and a chance to do the math, I could not turn it down.

Let’s start with the basics

The most recent estimate I have seen for the 15-16 salary cap put it at $66.5 million, though I hope and expect we will see an updated number when the league puts out the hard figure for next season at the end of the July moratorium.

From there, if we are working from the idea that at least one of the two max players will come from cap space (which seems more than fair since trading for both would be quite unlikely), the prudent tact would be to take out two maximum salaries from that cap number. To be conservative, I used a larger hold for someone with LeBron James’ level of experience and one with Kevin Love’s. Those numbers combine to a little over $38 million, meaning the non-max salaries and holds on the books for Golden State could add up to a total of just over $28 million. Including Stephen Curry as a non-negotiable part of that team works that number down to just about $17 million since we know his contract value.

Keep in mind what that $17 million number must include: every salary, cap hold, and exception for an entire non-Curry roster. For reference, the league puts minimum holds on during the offseason for every roster spot a team has under the minimum. Taking those into account and using the assumptions discussed above, the true “wiggle room” in total non-Curry money would be just over $12 million- those $525,093 cap holds really add up.

That means that barring a change to one of the assumptions, no more than one of Andrew Bogut, Andre Iguodala and Klay Thompson would be even conceptually possible to be on the team for there to be enough cap space. Thompson’s rather large cap hold puts him in this group, but Draymond Green’s super cheap 14-15 salary actually means he could be a continuing part of the team even with such a drastic strategy.

At this point, the question you should be asking yourself is how this whole thing would work. Basically, the Warriors would need to move all but one of Lee, Bogut, Iguodala and Thompson in deals that only return one of those two max players or expiring contracts. Any other salary counts against the non-Curry total whether you want to use $17 million or $12 million.

Making such a huge overhaul would require an incredibly strong justification and the potential Unrestricted Free Agent class of 2015 could be worth it.

The players I would consider for these two max slots: LeBron James (if he opts in), Kevin Love (if he opts out or is traded for) and Marc Gasol.

If the team could split one of those max slots among multiple players or three guys take less than the max to play with each other and Curry, the list could expand to include Carmelo Anthony (if he opts in), LaMarcus Aldridge, Brook Lopez (player option, interesting choice if healthy), Goran Dragic (if he opts out), Arron Afflalo (if he opts out), Paul Millsap, DeAndre Jordan, Tony Parker (if you want to have lots of fun), Roy Hibbert (player option), Omer Asik and Robin Lopez.

A core of Stephen Curry with any two of those max guys or one of them and two of the next tier would be quite formidable even in a stacked Western Conference. The other huge factor here would be age- while the current #FullSquad performed well last season, three of the five are on the wrong side of their peak while the team could develop a much more formidable foundation here.

How it would have to work

While not every piece of this would have to be accomplished immediately, the Warriors would need to take major steps in the short term because some moves simply will be too tough to accomplish next summer considering time pressure and leverage.

The best way to look at this is through evaluating what it might take to get each of the large contracts somewhere else while taking back almost exclusively expiring contracts.  Amazingly enough, the rumored Kevin Love trade could actually get the Warriors a substantial portion of the way there since David Lee stands as the only must-trade due to his higher salary.

What we cannot know right now is what teams would see Iguodala or Bogut as an asset at their current salary. I’ve used the term “The Nene Test” as a shorthand for this and both Golden State defensive aces are tough to assess on those grounds. Each has three years and $35-36 million left on their contracts, which can be justified now but may be a tougher sell in the final year or two. Like many baseball deals for players in their thirties, the first couple years of a contract are supposed to be overperformed while the finals years provide the rest of the compensation. Any teams that feel that way would be reticent to acquire either Bogut or Iguodala at their current salaries. The Warriors also have very few sweetners with two first round picks owed to Utah and players like Festus Ezeli and Draymond Green ideally provided the necessary depth behind the core.

That said, a few teams stand out as potential destinations for each: Bogut’s role as a pure center who can be the anchor of a defense could bring the Hawks, Suns, Wizards, Cavs, Thunder and Mavericks to the table, while Iguodala would be a nice fit for the Cavs, Grizzlies,  Suns and others. Also, Brooklyn would be a fascinating possibility for either with Kevin Garnett’s expiring contract. While he does not have much left in the tank, Garnett has added value for the Warriors because of his potential to make a long-term imprint in one season without costing the team salary flexibility. Heck, a deal with a core of Bogut and Iguodala for KG and Brook Lopez could be a nice alignment of interests if the Warriors had a strong indication a second max player would be interested in joining the team.

Please remember that this was a thought experiment not an advocacy piece.  While a drastic path like this would be possible, it also carries gigantic downside risk since the Warriors are already a good team.

What could make the most sense would be reassessing this concept if the Kevin Love trade happens somewhat close to what has been rumored. From there, the Warriors would have the two more desirable of their contracts to move (Bogut and Iguodala) and could potentially use leverage as the season wears on to move one or both onto desperate teams. Remember what happened with the Wizards and Marcin Gortat after Emeka Okafor got hurt. Playing both sides poses risks too as we are dealing with real people and the team cannot get a commitment from Kevin Love early on so they must keep him happy at least until the ink dries on his next contract.

The useful part of the exercise is that the Warriors still have the flexibility to build a better core with the right mix of aggression and luck.