Rockets Build Bench From The Deepest Of Pools 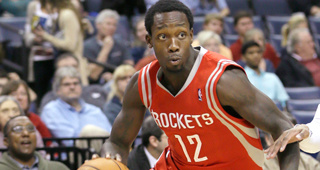 Chandler Parsons has received most of the press, but he's not the only important player the Houston Rockets need to replace, as they also gave away Jeremy Lin and Omer Asik for essentially nothing in terms of present assets. Even worse, because the Rockets were already pressed close to the salary cap, they were forced to shop in the free agency bargain bin for Lin and Asik's replacements, signing a few European free agents and second round picks on minimum-salary deals.

The guys they are bringing in - Joey Dorsey, Jeff Adrien, Nick Johnson, Isaiah Canaan and Robert Covington - have proven nothing at the NBA level. Nevertheless, there's still reason for optimism about their ability to contribute immediately, as no front office in the NBA has done a better job of finding players off the street than the Rockets. Houston jump-started the careers of Patrick Beverley, Greg Smith and Troy Daniels, all players the rest of the league passed over.

A former second round pick of the Miami Heat in 2008, Beverley had refined his game after bouncing around Europe for a few seasons, but few NBA teams noticed a guy who had slipped through the cracks the first time. He was brought in to back up Lin, but he eventually won the starting PG job due to his superior defensive and spot-up shooting ability. He is one of the best bargains in the league, a starter on a 54-win team who makes only $1 million a year until 2016.

Coming out of college, Smith had the size (6’10 250 with  7’3 wingspan) and the athleticism to play in the league, but he didn’t get a lot of publicity on a bad Fresno State team and went undrafted in 2011. In three seasons with the Rockets, he put up per-36 minute averages of 13 points, 10 rebounds and 1.5 blocks on 62% shooting. Still only 23, he signed a guaranteed contract with the Dallas Mavericks this offseason and looks headed for a long NBA career.

Daniels was one of the best shooters in the country at VCU, but his one-dimensional game caused him to go undrafted and he wound up in the D-League. After averaging 21 points a game with the Rio Grande Valley Vipers while hoisting 12 3’s a game, the Rockets gave him a shot on the biggest stage of the sport. He responded with a game winner in Game 3 and a 17-point scoring outburst in Game 4 of their first-round series with the Portland Trail Blazers.

With their most recent signings, Houston is gambling they can find the next versions of those players. Dorsey, Adrien, Canaan, Johnson and Covington all have holes in their games, but they also have skill-sets that could allow them to thrive in roles on a second unit. That’s what separates the Rockets from a lot of other NBA franchises - they aren’t afraid to give younger players chances rather than recycling brand name players and established veterans on their last legs.

At 6’9 260 and 6’7 245, respectively, Dorsey and Adrien were caught between positions in their first runs through the league, without the height of a center or the skill to play out on the perimeter. However, either would be an interesting frontcourt partner on the second unit for Donatas Motiejunas, a 7'0 stretch 4. Playing behind Dwight Howard should also minimize their lack of size, since few NBA teams play two traditional centers in their rotation anymore.

Neither Johnson nor Canaan is a pure playmaking PG, which is why they both slipped into the second round, but they both have the athleticism and scoring ability to create shots against second-unit defenses. Canaan, the Rockets second-round pick in 2013, spent last season in the D-League, where he averaged 22 points a game. Johnson, their second round-pick in 2014, was a second-team All-American and Pac 12 Player of the Year as a junior at Arizona last season.

Covington, like Canaan, spent most of last season in the Rio Grande Valley, where he averaged 23 points and 9 rebounds a game on 44% shooting while taking 8 3’s a game. At 6'9 215, he has the size and shooting ability to be a stretch 4. He was undrafted out of Middle Tennessee State because of concerns about his level of competition in college as well as his position at the next level, but he has the athletic ability to at least hold his own defensively on a second unit.

There's no guarantee that any of the five will make it, but you could have said the same thing for Beverley, Smith and Daniels. What all three needed was a chance, which doesn’t always happen for young players on the fringes of the NBA. Far too many teams are blinded by NBA experience, bypassing more talented guys for “proven veterans”. Just as an example, at the same time the Rockets signed Beverley, the Mavs brought in Mike James to be their backup PG.

However, for teams looking to round out their bench, the upside of looking under every nook and cranny for talent is clear. Alan Anderson, Gerald Green, Chris Copeland, Anthony Parker, Pero Antic - the list of NBA rotation players who played in the European leagues grows every year. They don't cost much money and they don't cost anything in terms of assets. That's what a lot of teams don't understand - there's no shortage of professional basketball players out there.

The NBA is only the tip of the iceberg when it comes to professional basketball players. By the time guys reach their prime, they are at least 3-4 seasons removed from college. Whether or not they played in the NBA, they have learned how to last as pros and have been forced to mature on and off the court. Even if we assume the top 450 in the world are in the NBA (and they aren’t), players right outside that group can improve dramatically in their mid to late 20’s

If Canaan, Johnson, Covington, Adrien and Dorsey don't stick in Houston, they'll bring in more guys with NBA measurables and resumes that are just as good until they find some players who do. While their bench is a question mark coming into the season, my guess is they’ll figure out a mix that works by the playoffs. There's so much talent in the world there's no reason for any of the 30 NBA teams to have a bad bench. You just have to be willing to give guys a chance.