Ha, 7-3, 305-pounds, was the Portland Trail Blazers' second-round (46th overall) selection in the 2004 NBA Draft. In 46 games (four starts) with the Trail Blazers over the last two seasons he averaged 6.9 minutes, 1.5 points and 1.5 rebounds. He is the first player from Korea to play in the NBA.

This is Ha?s second stint in the D-League, having been assigned to the Fort Worth Flyers by Portland last season. In five games with the Flyers he averaged 14.4 minutes, 2.0 points and 3.8 rebounds. 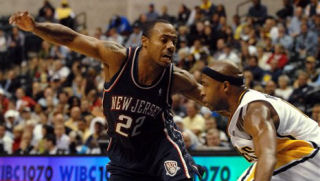 The Austin Toros of the NBA Development League have acquired guard Troy Bell, the 16th overall selection in the 2003 NBA Draft. He fills the roster spot vacated by the second pick in the 2002 NBA Draft, guard Jay Williams, who was waived to rehabilitate a nagging injury.

Bell, 6-1, 180, out of Boston College, was the Thunderbird?s first selection in the 2006 D-League Draft (12th overall). In 11 games (one start) he averaged 10.7 points, 3.7 rebounds and 2.5 assists before being waived by the Thunderbirds on Dec. 27. He was the 16th overall selection in the 2003 NBA Draft by the Boston Celtics, who traded his rights to the Memphis Grizzlies. Bell played six games during the 2003-04 season with Memphis, averaging 5.7 minutes and 1.8 points. He had brief stints the next two seasons in both Spain (Real Madrid) and Germany (Frankfurt Skyliners). 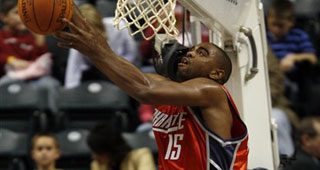 Former Charlotte Bobcats guard/forward Alan Anderson has been acquired by the Tulsa 66ers of the NBA Development League. The team also waived forward Chris Ellis due to injury.

At 6-6 and 220-pounds, Anderson played in 42 games for Charlotte over the last two seasons after signing with the Bobcats as an undrafted free agent on August 9, 2005. In six games with Charlotte this season he averaged 10.2 minutes, 2.0 points and 1.3 rebounds before being waived on Nov. 27. Anderson's career NBA per game averages include 14.9 minutes, 5.2 points and 1.3 rebounds. In 126 career games at Michigan State he averaged 9.5 points, 4.2 rebounds and 2.4 assists.

Both players are members of the Dakota Wizards.

''He has a skull fracture, severe concussion and a two-centimeter hematoma on the left side of his brain,'' Andriuskevicius' agent Herb Rudoy said. ''They've been monitoring him because they're concerned about seizures.

''From what I'm told, when he got hit unexpectedly, he went out cold instantly and fell right back on his head.''

Storey has been suspended indefinitely. 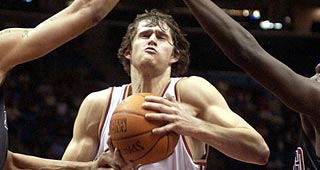 At 6-7, 215, Luke Jackson played his college basketball at Oregon before being selected in the first round by the Cleveland Cavaliers in 2004. Battling injuries, he played in 46 games (no starts) for Cleveland in 2004-05 and 2005-06, averaging 7.8 minutes, 2.7 points and 1.0 rebounds. The Cavaliers traded him to the Boston Celtics for former D-Leaguer Dwayne Jones on Oct. 13. The Celtics released him on Oct. 26. 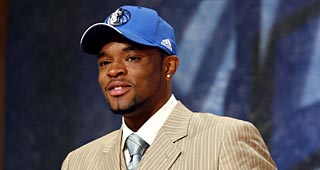 The Dallas Mavericks announced today that they have assigned guard Maurice Ager to the Fort Worth Flyers of the NBA Developmental League.

The Mavericks selected Ager in the first round of the 2006 NBA Draft with the 28th overall pick. The former Michigan State standout has seen action in 15 games this season, averaging 1.5 points in 4.3 minutes per game.

Former Syracuse guard Gerry McNamara, one of only six players in NCAA history to make 400 or more three-pointers, has been acquired by the Bakersfield Jam of the NBA Development League. The Jam waived guard Tony Bobbitt due to injury.

The Chicago Bulls today announced it has assigned 7-2 center Martynas Andriuskevicius to the Dakota Wizards of the NBA Development League (D-League).  Dakota has been assigned the Bulls? D-League affiliate for the 2006-07 season.

Andriuskevicius, a second-year center from Lithuania, has yet to appear in a regular season game with the Bulls.  He was acquired on August 18 from Cleveland in exchange for guard Eddie Basden. 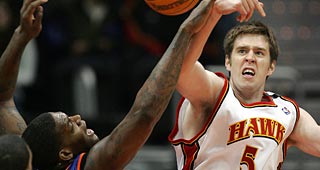 Edwards, 7-0, 265, has played in the NBA with the Indiana Pacers and the Atlanta Hawks. After finishing his collegiate career at Kent State, Edwards played with the Pacers in 2004-05, the Hawks in 2005-06 and was traded back to the Pacers along with Al Harrington on August 22, 2006 for a 2007 first round draft selection. He was waived by Indiana on October 30.

He played in 65 NBA games (five starts), averaging 6.7 minutes, 1.5 points and 1.0 rebound. Edwards was a first-team All-Mid-American Conference selection at Kent State as a senior (2003-04), averaging 13.2 points and setting a school record with 81 blocked shots.

Williams, 6-2, 195, was the second overall selection in the 2002 NBA Draft by the Chicago Bulls and was the recipient of the 2002 Naismith and Wooden Awards following his final season at Duke, given annually to the nation?s best collegiate basketball player . Williams led Duke to the national championship in 2001 and was a two-time Associated Press first-team All-America selection.

He is continuing his basketball comeback after severing a nerve in his leg, fracturing his pelvis and tearing three of the four main ligaments in his left knee in a motorcycle crash in June of 2003. Williams reports to the Toros on Sunday and will play for former NBA great Dennis Johnson, in his second season as head coach at Austin.