Reggie Williams of the Sioux Falls Skyforce was today named NBA Development League Performer of the Week for games played during the week of Dec. 21.

Williams averaged 26.5 points, shooting 63 percent (22-of-34) from the field last week, to go with 4.0 rebounds and 4.5 assists.  The forward out of Virginia Military Institute notched his third 30-plus point of the season outing on Dec. 26 when he scored 31 points on 13-of-18 shooting from the floor.  On the season, Williams ranks second in the league with 26.5 points per game and fourth in the league shooting 60 percent (69-of-116) from the field. 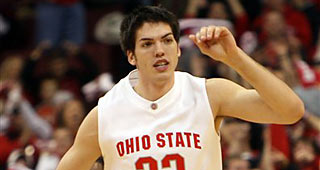 Mullens appeared in 11 games (11 starts) for the 66ers since he was originally assigned to Tulsa on November 21. The 7-0 center averaged 15.8 points, 8.3 rebounds and 1.27 blocks per contest while with Tulsa.

Curtis Jerrels and Dwayne Jones of the Austin Toros were today named NBA Development League Co-Performers of the Week for games played during the week of Dec. 14.

The duo led Austin to a 2-0 record, which included road victories over the Albuquerque Thunderbirds. 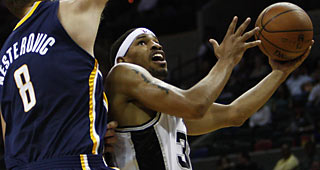 Desmon Farmer of the Reno Bighorns was today named NBA Development League Performer of the Week for games played during the Week of Dec. 7.  Farmer is the first Bighorn to earn the honor this season and the third player overall.

For the week, Farmer led Reno to back-to-back wins over the Utah Flash and Bakersfield Jam.

Phoenix Suns forward Taylor Griffin was assigned to the Iowa Energy, the Suns? NBA D-League affiliate, it was announced today.  The assignment is the seventh of the 2009-10 NBA D-League season.

Selected in the second round (48th overall) by the Phoenix Suns in the 2009 NBA Draft, Griffin has appeared in two regular season games for the Suns this year.  In the 2009 NBA preseason, Griffin played in six games, scoring 11 points and grabbing 11 rebounds in 56 minutes.

Sundiata Gaines and Anthony Tolliver of the Idaho Stampede were today named NBA Development League Co-Performers of the Week for games played during the first 10 days of the season.  Gaines and Tolliver are the first players to earn the honor this season.

The duo led Idaho to a 3-1 record, including two wins over the Reno Bighorns and one over the Dakota Wizards.

San Antonio Spurs forward Malik Hairston was assigned to the Austin Toros, the Spurs NBA D-League affiliate, it was announced today.  The assignment is the fifth of the 2009-10 NBA D-League season, and the third for Hairston from the Spurs to the Toros in two years.

Originally selected in the second round (48th overall) of the 2008 NBA Draft by the Phoenix Suns, Hairston was traded to San Antonio, where he spent 2008 training camp before being waived by the Spurs on Oct. 26 and joining the Toros.  He then earned a GATORADE Call-Up from the Toros to the Spurs on Dec. 22, 2008 and was twice assigned back to the Toros.

In 30 total games for the Toros last season, Hairston averaged 22.9 points, good for third-best in the NBA D-League, to go with 5.5 rebounds, 3.7 assists and 41.3 minutes.  He scored an individual career-high 43 points against the Colorado 14ers on Jan. 11, and earned NBA D-League Honorable Mention honors along with NBA D-League Performer of the Week honors for games played during the Week of Dec. 15, 2008.

NBA D-League Frisco is proud to announce that General Manager Del Harris has accepted a position with the New Jersey Nets as an assistant coach.  Harris represents D-League Frisco?s first NBA ?call-up? as he returns to the NBA ranks.

Harris was announced as Frisco?s General Manager at a press conference on November 5th, and while his time with the Frisco franchise was relatively brief, his impact will continue to be felt.

?I am very excited for Del and the opportunity he has before him,? Head Coach Nancy Lieberman commented.  ?He?s been such an asset for so many people for so long, and he is deserving of this position to share his wisdom with the players in New Jersey.  If I have any questions, he?s only a phone call away ? and I will be calling.  I wish him the best of luck.?

Owner Donnie Nelson put together a star-studded cast in Frisco as Lieberman was named head coach, Spud Webb the President of Basketball Operations, and Harris the General Manager at the November 5th press conference.

?Wow, our first NBA call-up and we don?t even have a name yet.? Nelson said.  ?It?s only fitting that it?s Del Harris. He?s been a trailblazer and innovator throughout his decorated career. When you have someone as talented as Del on your staff, with more than 50 years of basketball experience and countless awards and honors, you know losing him is always a possibility.  But this is what the D-League is all about, making dreams coming true.  Kiki has chosen one of the wisest coaches I?ve ever served with and a man of impeccable integrity.  We wish the ?Silver Fox? nothing but success? starting Friday night of course.?