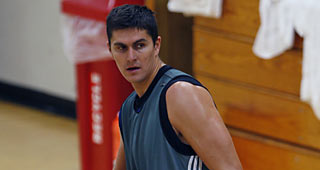 Darko Milicic has revealed he has decided to play in Europe next season.

"Whatever happens, I'm going back next year," the 7-foot-1 Milicic said after Wednesday's Knicks practice at Moody Bible Institute. "It's 100-percent certain. I have to be real and not lie. I'm not going to get it done in the NBA. I'm not going to get another opportunity and there's nothing wrong with going back to Europe. I don't want to create a bad atmosphere here, but it's not working in the NBA."

Milicic was a DNP in 15 of the last 16 games. With the Knicks signing center Jonathan Bender Sunday, Milicic may not dress again this season.