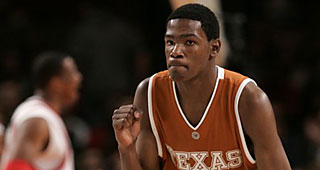 Kevin Durant has been keeping a close eye on Canadians Tristan Thompson and Cory Joseph, who are freshmen starring for the Texas Longhorns.

Durant played for Texas during the 06-07 season, his lone collegiate season.

“I’m very aware (of what they are doing) and I’m so happy for them,” Durant said before the Raptors defeated his Oklahoma City Thunder in a game in which he was forced to sit.

“I’ve known Tristan since he committed. When I was there, he came for an unofficial visit so I got to know him a little bit. He’s just grown as a player ever since. As a freshman, he’s taken on a major role.”

Durant is also enthused about Myck Kabongo, a Toronto native who will attend Texas next season.

“Myck I think is going to be a pro. T.J. Ford and D.J. Augustin were down there playing pickup and he held his own (as a 16-year-old),” Durant said.

“I’m excited for him to be a part of the family.”