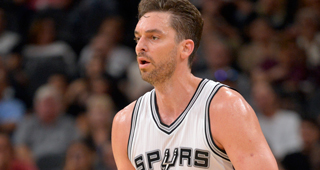 Pau Gasol hopes to resume his playing career in hopes of joining the Los Angeles Lakers for the 20-21 season and also plain for Spain in the 2021 Olympics in Tokyo.

"There is meaning and history there," said Gasol, who won titles with the Lakers alongside Kobe Bryant in 2009 and 2010. "I'm not going to lie. It would be very special, and now that my brother [Marc] is there, even more special. But I'm not in a position now to be very demanding. I don't have 10 offers on the table."

Gasol hasn't played in the NBA since March 2019 and has undergone two surgeries in his left foot. Gasol has been training in Northern California where he is living with his wife.

Gasol's brother, Marc Gasol, signed a two-year deal with the Lakers this offseason.

"I want the opportunity to contribute -- to feel needed," Gasol said. "Not just to be there. That's not who I am. I want to enjoy it, and players usually enjoy playing."