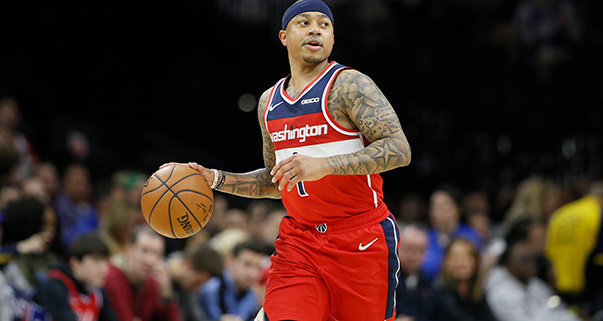 USA Basketball finished 6-0 in the AmeriCup qualifying tournament following their 96-75 win over Mexico.

"We really represent something bigger than ourselves, and we did that. We talked about how we had a standard to uphold," said U.S. coach Joe Prunty.

USA Basketball had already qualified for the next round prior to their two wins this week.

The AmeriCup qualifiers were a step to making the 2023 Basketball World Cup and the 2024 Paris Olympics.

Isaiah Thomas scored 19 points for the U.S. in their 93-77 win over the Bahamas in a FIBA AmeriCup qualifying game.

It was Thomas' first competitive game in over a year.

"The world knows I've got what it takes. So, it's just about showing that I'm healthy. My skill didn't go anywhere, it was just about getting a hundred percent healthy, which I am right now," said Thomas after the game.

Ben Simmons was one of nine NBA players announced to Australia's basketball team for this summer's Olympic games.

Simmons has yet to play for Australia in a major international tournament.

"It would be an amazing honour to play for my country. I know things are uncertain right now but I've been in touch with Coach Goorjian and we're hopeful I can join the Boomers," said Simmons.

Australia finished in fourth place during the Brazil Olympics.

USA Basketball is planning on creating a bubble in Las Vegas for Team USA, Australia, and Spain to train together before this summer's Olympics.

Team USA has tentatively planned to open training camp the week of July 4th, during the NBA playoffs.

The playoffs are currently scheduled to go through July 22nd.

USA Basketball has also petitioned the Olympic committee to allow for roster changes even during the Olympics to account for players still active in the playoffs.

"Rosters by a certain date doesn't make any sense. What we're seeking is flexibility to substitute players very late and to get the best players on the court. It doesn't just apply to us but for all the countries," said managing director Jerry Colangelo.

"It's exciting to learn more about the Olympic schedule and who our preliminary-round opponents will be in Tokyo," Team USA coach Gregg Popovich said in a statement. "The three Olympic preliminary groups appear to be well balanced, and there are a good number of teams who have legitimate shots at the gold."

Iran and the team that wins the qualifying tournament for the final spot in the games will be in the group as well.