Change news category?
USA Basketball Will Take Roster Inventory After Each Round Of Playoffs 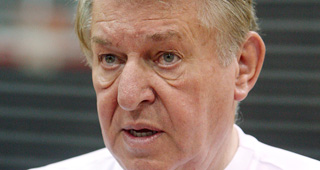 Jerry Colangelo will remain patient with finalizing the roster for USA Basketball ahead of the Olympics. USA Basketball will conduct a minicamp as early as July 1st in Las Vegas.

“I’ll cut to the chase because people are asking me, ‘A lot of teams are out (of the playoffs) – are you going to get early commitments from certain people?’ ” Colangelo told USA TODAY. “That’s not the way we’re going to deal with this. We have interest in all of them. There’s a lot of variables, and so we’re going to do inventory after the first round. There’ll be a number of players who we have interest in that conceivably are available after the first round. There’s no rush because we have the flexibility.”

Colangelo could possibly hold a spot for a few players who reach the Conference Finals and beyond.

"It’s conceivable, there will be a few players who are competing in the Finals and want to participate and we want them to participate," Colangelo said. "But we don’t know who that’s going to be. We have to wait and see. That’s why we’ll take inventory after each round. It’s possible that we don’t end up with 12 in Las Vegas and we bring a couple of guys at the last minute."

The current deadline to turn in Olympic rosters is July 5th, just before the start of The Finals.

Players who participate in the Conference Finals and are eliminated may also have too short of a runway to join the United States in the Olympics.

Even from the player pool who are not participating in the playoffs, there haven't been any firm commitments. Stephen Curry and Draymond Green are undecided, while Kyle Lowry, DeMar DeRozan and Jarrett Allen are free agents.

Jerry Colangelo has yet to reach out to Curry and Zion Williamson to gauge their interest in playing. Commitments from those two players would likely help encourage others to join.

Curry last played for the United States in the 2014 World Cup and has never played in the Olympics.