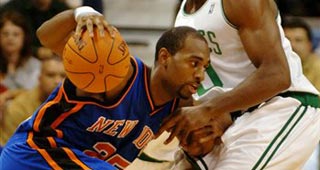 Mardy Collins returned to the Knicks' lineup after serving a six-game suspension and scored 11 points in 22 minutes.

It was the rookie guard's flagrant foul against Denver's J.R. Smith that triggered a brawl at Madison Square Garden on Dec. 16, resulting in the ejection of all 10 players on the court at the time and additional suspensions for teammates Nate Robinson (10 games), Jared Jeffries (four) and Jerome James (one).

"Anytime you sit out for a number of games, you always want to get back out there and play," Collins said. "The NBA decided that six games was enough, so I just had to deal with it. We're still short-handed at guard, so it's time for me to get some playing time, show people that I'm not that type of player, and I can actually play basketball the right way." 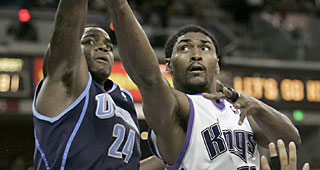 The Los Angeles Clippers are no longer in the running to swing a trade for Ron Artest, general manager Elgin Baylor said Saturday.

"As far as anything goes with Ron Artest, that's a dead issue," Baylor said, according to the Los Angeles Times. "We're no longer talking to Sacramento about Artest ? that's not going to happen."

The Sacramento Kings contacted the Clippers last week to discuss the possibility of a trade for the former NBA defensive player of the year. The Kings did not, however, follow up the opening talks with a formal trade proposal.

Baylor said the Clippers are still looking at other possible deals.

"We're always looking to improve the team," Baylor said, according to the Times. "We talk to teams regularly about players we're interested in, players that we think can help us, and we'll also listen if someone comes to us with something that we think makes sense for us. That's what you have to do when you're trying to win." 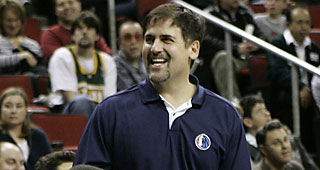 Michael Heisley and Mark Cuban both received their ownership papers on the same day in April of 2000 and they reportedly feel a kinship with one another.

"I told him it would be a sad day for the NBA if he sells, because he just doesn't take the nonsense," Cuban said. "He's as much in tune with a lot of the business practices as I am, and he doesn't agree with them.

"He's just not as vocal about them. His way of speaking out is by selling the team. I mean, I don't want to speak for him, but that's the sense I get." 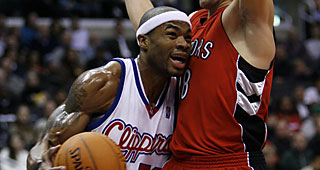 The Clippers and Spurs have reportedly discussed a Corey Maggette deal.

But one NBA source said Saturday a trade between the teams likely "won't happen."

One Spurs' official said that Maggette would likely get fewer minutes in San Antonio than he is in Los Angeles.  Maggette's playing time has been a key factor in his trade request. 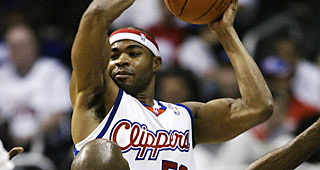 Even though trade discussions between the Kings and Clippers have apparently ended, Corey Maggette remains very available.

?The Clippers want to get rid of Maggette in the worst way,? said one league general manager. ?And Artest had worn out his welcome in Sacramento halfway through last year. The thing that gets me is that Iverson gets a rap when you think about these two. At least Iverson goes out and tries to win for you every night.? 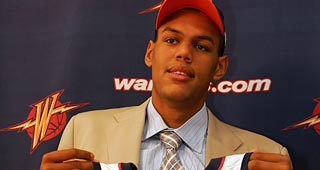 Golden State welcomed back power forward Troy Murphy on Saturday after a 10-game layoff because of a sore left Achilles tendon. But after their 119-96 loss to the Sacramento Kings, the Warriors said farewell, at least temporarily, to rookie center Patrick O'Bryant, who was sent to join the Bakersfield Jam of the NBA Development League.

Murphy, who made it clear during his convalescence that he doesn't feel like he's fitting into Coach Don Nelson's system offensively, said that situation hadn't resolved itself over the past 2 1/2 weeks.

``Not really,'' Murphy said. ``But hopefully I can go in and help the team in other ways.''

Murphy said he was ``pretty close'' to full strength but wasn't certain how that would translate in games. 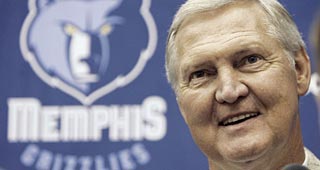 The Tony Barone era got off to a running start Saturday night, as Memphis built an early 24-point lead with a less-disciplined, fast-paced offense, then held off a late rally to beat the Raptors 110-104.

"It's a great win for these guys," Barone said of the Grizzlies, who snapped a five-game losing streak. "It's a weight off their shoulders. I'm dead tired. I'm done. I've told (Jerry West, president of basketball operations) I'm done. That was enough." 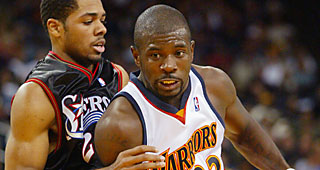 Jason Richardson could be out for two months after breaking his right hand during the Warriors' game against the Kings on Saturday night.

Richardson, the Warriors' leading scorer last season, was hurt during the second quarter, apparently when Mickael Pietrus kicked out his leg while blocking a shot and accidentally kicked Richardson. After X-rays at Arco Arena revealed the break, Richardson was placed in a cast by the Kings' medical staff. 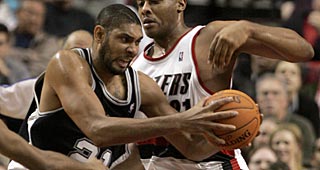 Tim Duncan apparently became the latest Spurs player to fall ill when he missed Saturday's practice. Team officials listed him as questionable for this afternoon's game against Atlanta.

"He just called in and said he had an upset stomach," Spurs coach Gregg Popovich said. "That's how it began with everybody. We'll just see how he feels tomorrow." 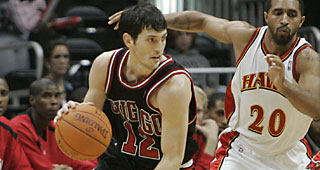 Chicago guard Kirk Hinrich missed the Bulls' game against the Cleveland Cavaliers on Saturday night because of a groin injury.

Hinrich, averaging 14.5 points and 5.8 assists, left late in the third quarter of Friday's 107-97 victory at Toronto after he aggravated a condition that had been nagging him for a week when he tried to stop T.J. Ford's penetration.

"It was something that bothered me about a week ago," Hinrich said. "It felt like something real minor, but it had been feeling good. Then, I [strained] it."

Hinrich hopes to play Tuesday when the Bulls host Phoenix.

Kobe Drops 58 But Bobcats Get Win

Yao To Get Second Opinion

Michael And Juanita Jordan To Divorce

Spurs Send White Back To D-League

Paul Out At Least One Month

Peterson Ready To Return, Not Leave