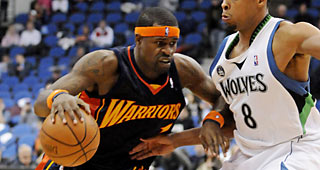 Golden State Warriors guard/forward Stephen Jackson underwent successful surgery today to remove multiple bone spurs from his left foot, the team announced.  The surgery, which was performed by Dr. Thomas Clanton in Houston, Texas, revealed that the bone spurs were located directly over nerve tissue under the big toe. Jackson will be sidelined for the remainder of the season and will begin rehabilitation in approximately six (6) weeks. 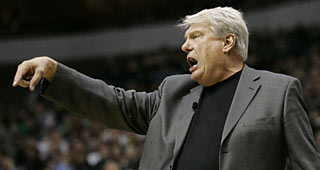 Warriors coach Don Nelson believes that the race to represent the Western Conference in the NBA Finals is wide-open.

"I think anybody can beat anybody," Nelson said. "I think it's like when we beat Dallas when we were eight and they were one. Everybody is trying to get to full strength, rest their guys and make sure everybody's healthy for the playoffs, as it should be."

Golden State completed one of the greatest upsets in NBA history when they defeated top-seeded Dallas in the first round of the 2007 playoffs. Nelson doesn't think the Lakers are immune from such a fall.

"Even the Lakers, without [Andrew] Bynum, are lacking something," Nelson said. "They're still winning, but they're not as powerful. They need a full roster. It'll be interesting to see when everyone has their full roster how everything shakes out." 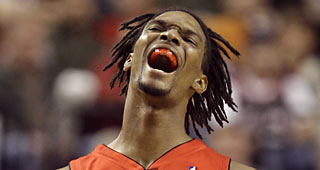 The Raptors are unsure of whether or not they'll shop Chris Bosh this summer, but sources indicate that the Warriors are interested in the All-Star forward.

Golden State reportedly inquired about Bosh prior to the Feb. 19 trade deadline, but Toronto wasn't interested in making a major move.

If the Raptors do decide to scrap their current roster and move Bosh, the Bulls are expected to make a play as well. 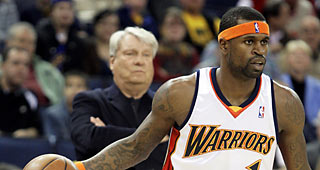 Golden State's Stephen Jackson will undergo surgery to remove bone fragments from his big left toe on Tuesday, which will end his season.

The toe, which has bothered him for the last two seasons, was examined on Friday in Houston. 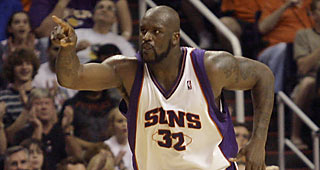 The Suns will play another exhibition game outdoors in the desert, this time against the Warriors on Oct. 10.

Phoenix faced Denver at the Indian Wells Tennis Garden last October and lost 77-72 before a sellout crowd of 16,000.

"It was an amazing experience to play an NBA game outdoors," Suns point guard Steve Nash said. "We all grew up playing basketball outdoors and we don't get to do it very often any more." 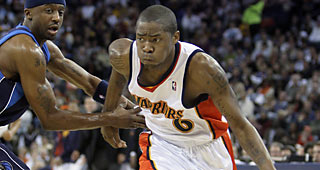 Warriors coach Don Nelson has again gone on record as saying that a back court tandem of Jamal Crawford and Monta Ellis will not work, comparing the combination as mixing like "oil and water", the San Francisco Chronicle is reporting.

"I don't think that the mix is good enough, it's just like with oil and water," Nelson said before Tuesday's game. "They're both really good players, but we need somebody that can guard a 2. Especially when you get into the good teams, the 2's are 6-foot-7, and Monta's not a very big guy."

Nelson sat Crawford against the Clippers to get Marco Belinelli some playing time - a process the coach said will be repeated against the Lakers in Los Angeles on Thursday. 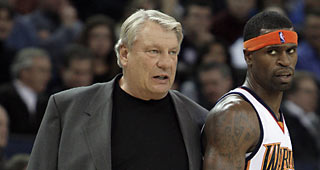 Just two years removed from their first playoff run in thirteen years and a shocking upset of the top-seeded Mavericks in the first round, the Warriors are headed towards a 50-loss season.

"There is no long-term plan," one NBA executive said of the team.

"There is no plan, period," an agent commented. "They act like there is and they say there is, but there isn't."

Numerous sources believe that coach Don Nelson and president Robert Rowell are to blame, constructing a team based on impulse and ego. 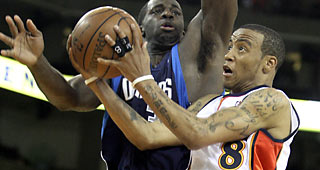 The Warriors are still holding onto the right to terminate the remainder of Monta Ellis' six-year, $66 million deal.

Jeff Fried, the guard's agent, was set to meet with Golden State's front office on Sunday at Oracle Arena.

The Golden State Warriors' Stephen Jackson has received a one-game suspension without pay after receiving his 16th technical foul of the 2008-09 season, it was announced today by Stu Jackson, NBA Executive Vice President, Basketball Operations.

Jackson received his most recent technical foul with 3:54 remaining in the third period of Golden State?s 154-130 loss to the Phoenix Suns on Sunday, March 15 at ORACLE Arena in Oakland, Calif. Jackson will serve his suspension on Tuesday, March 17 when the Warriors host the Los Angeles Clippers at ORACLE Arena.

Stephen Jackson was hit with two techinical fouls during the Warriors' loss to Phoenix in Oakland on Sunday night, and if they are not downgraded he will miss the home game against Baron Davis and the Clippers, the San Francisco Chronicle is reporting.

Jackson, who was tossed in the third quarter, will be serving a one-game suspension after surpassing the NBA season limit for technical fouls.

Players are allowed 15 "unsportsmanlike conduct" technicals in a season. Beginning with the 16th, players earn an automatic one-game suspension for every two technicals.

Share Tweet Discuss Feedback
Suns Torch Warriors For Season-High 154
The Suns defeated the Warriors 154-130 on Sunday night at ORACLE Arena, setting a new NBA season-high in points for a single team in the process.

Jackson Adds 10 Pounds Of Muscle
Stephen Jackson has added 10 pounds of muscle through an increase in his weight training regimen.

Sources: Mullin Won't Return To Warriors In 09-10
Chris Mullin will not return as a member of the Warriors' front office for the 2009-10 season.

RealGM Recaps For Games On Wednesday, Mar. 11th
Wednesday's action in the NBA was close to a full slate, and, believe it or not, the playoff race in the Eastern Conference got even tighter.

Nelson To Crawford: ''Opt Out Or We'll Move You''
Jamal Crawford has been told that he does not have a future with the Warriors.

Ellis: Absence Had Nothing To Do With Ankle
Monta Ellis rejoined the Warriors on Monday, and admitted that his absence from the team had nothing to do with his surgically-repaired left ankle.

Is Mullin's Absence A Factor In Warriors' Decline?
There has been a lot of turmoil in Golden State recently, with reports that Monta Ellis is unhappy and that coach Don Nelson wants Jamal Crawford to opt out of his contract at season's end.

Sources: Monta Trying To Get Out Of Golden State
Monta Ellis reportedly is unhappy with the Warriors.

Nellie Wants Crawford To Opt Out
Don Nelson is encouraging Jamal Crawford to opt out of the final two years and $19.4 million of his deal.

RealGM Recaps For Games On Tuesday, Mar. 3rd
The Pistons beat the Nuggets on Tuesday night as the Palace of Auburn Hills welcomed Chauncey Billups back for the first time since his infamous November trade.

Nelson Will Continue To Rest Warriors' Veterans
Golden State coach Don Nelson announced a plan last week to rest his stars in favor of the team's younger players, which has caught serious criticism.