The future of Lauri Markkanen with the Chicago Bulls has been an uncertain question as he becomes eligible for an extension this offseason.

The Bulls changed over their front office by hiring Arturas Karnisovas, so Markkanen will also be judged by a new regime.

Markkanen went on the record, however, by indicating his interest in remaining with the Bulls.

“I want to stay in Chicago and sign an extension (with the Bulls), no question. I love this city,” said Markkanen.

Markkanen is excited for Chicago's changes.

“Their work speaks for itself. I can’t describe how excited I am.” 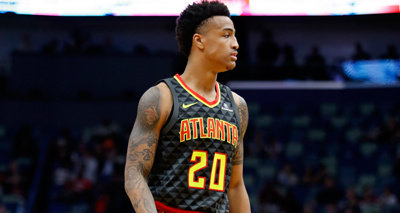 John Collins will be eligible for a rookie extension this offseason and his future with the Atlanta Hawks remains uncertain.

“When we’re talking max numbers and money, I feel like I definitely (am in) the conversation to have earned that money with the Hawks specifically, but obviously I know there’s business and we don’t always get exactly what we want,” Collins said. “But I want to be a Hawk, I want to stay with the Hawks."

Collins will be a restricted free agent in 2021 if he doesn't sign an extension.

“I feel like we’ve both invested ourselves in each other… I feel like we both want to see our investments in each other pay off. In that sense, I just want to know where I am. I want to know I’m locked in as soon as I can rather than having to wait, which I know happens, but when you do wait, a lot of other stuff mentally creeps in during the season while I’m tired, while I’m playing, ups and downs, injuries, but that’s also a part of just being a pro athlete.”

As a team, the Hawks struggled during the 19-20 season, but Collins believes they're close to breaking through.

“I want them to know we’re not as far away as you think,” Collins said.

The Golden State Warriors have been preparing for years to pursue Giannis Antetokounmpo, according to a source. The Warriors similarly planned for multiple years to pursue Kevin Durant as a free agent in 2016.

Antetokounmpo can sign a supermax extension with the Bucks in 2020, or opt for free agency in 2021.

League sources also believe Antetokounmpo would want to leave the Bucks if he loses confidence in the franchise's capacity to win championships. The Bucks had the NBA's best record when the season was suspended in March.

The Warriors' best chance of acquiring Antetokounmpo would likely come through a trade.

ESPN’s Ramona Shelburne said on “The Jump” in September that Golden State has “always been the big threat” to the Bucks in the Antetokounmpo sweepstakes.

The future of Rudy Gobert and Donovan Mitchell as functioning teammates with the Utah Jazz has been a question of concern since they both tested positive for COVID-19 in March.

"They're ready to put this behind them, move forward, act professionally," Dennis Lindsey said on a Zoom call Tuesday with media. "Look, the COVID-19 night of March [11] was really unprecedented. It brought a microscope to our team, and we get it. With that said, we're very pleased with the collective makeup of our group, Donovan and Rudy in particular.

Gobert signed a four-year, $102 million extension with the Jazz in 2016. Gobert will be eligible to sign a supermax extension this offseason.

Mitchell will also be eligible to sign an extension with the Jazz this offseason and he is expected to do so.