Change news category?
Pistons Could Use 2020 Cap Space In Trade To Collect Assets 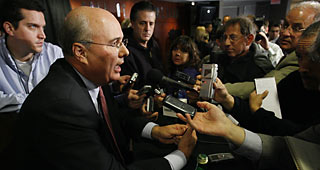 The Detroit Pistons could use their cap space this offseason to collect assets. The Pistons resolved one of their key anticipated decisions of the 2020 offseason at the trade deadline when they traded Andre Drummond.

"I think what’s going to happen there is going to see how the free agency plays out," said Ed Stefanski. "We’re working on different options that we think we may be able to implement. But until the free agency market opens and what happens, let’s say the ‘A’ players with the higher salaries go off the board, then we’ll be able to see what makes sense and how it all comes together. Do we use that cap space to get a player, too? That’s one option. Do we use that cap space to maybe make a trade somewhere? We could use that. Or do we just save our cap space going into the season to see if we can use it in a trade situation to either get players or to collect assets?"

Members of the New York Knicks front office believe that they are in a good position to trade for a disgruntled star due to their assets.

"It's the best path for us," a front office member told Ian Begley of SNY.

The Knicks currently have seven first-round picks over the next four draft, alongside a young core including RJ Barrett and Mitchell Robinson.

The team also has cap flexibility due to signing players to short-term contracts.

The desire to hold onto their assets influenced how they operated in the buildup to the 2020 trade deadline. The Knicks' only move was in trading Marcus Morris to the Clippers for Moe Harkless, a 2020 first-round pick, and a 2021 second-round pick.

There have been questions about whether Donovan Mitchell and Rudy Gobert will repair their relationship long-term. For now, the Utah Jazz have no plans to break up their core.

"There aren’t any plans on trading either one of them," writes Tony Jones of The Athletic. "If you made a list of the most untouchable players in the league, Mitchell would be on that list. He’s a dynamic talent, who is very well liked and a draw to other players around the league. He’s been terrific in the community. Most important, the Jazz have years of team control left in regards to his contract.

"As for Gobert, the Jazz have built their entire identity defensively around his talents. He’s one of the top 15 players in the league. He’s a unique player in the league. It’s imprudent to speculate on who the Jazz can get for either guy, because there aren’t any plans on trading either guy."

Leon Rose is reportedly open to either trading or not picking up Julius Randle's contract option for the 2021-22 season, league sources told Marc Berman of the New York Post.

Randle would still count for $4 million on the cap should his option not get picked up.

Rose represented Randle while at CAA.

The Knicks almost traded Randle at the deadline in a deal for Terry Rozier, according to sources.