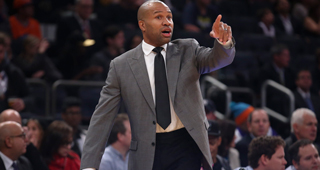 Quincy Acy was ejected from the New York Knicks' loss to the Washington Wizards following his confrontation with John Wall. The NBA has given Acy a one-game suspension.

Wall received a shove from Acy when he had the ball with 5:31 left in the fourth quarter. Wall retaliated with a shove of his own and Acy may have then threw a punch.

Both Acy and Derek Fisher said that Acy did not throw a punch at Wall.

"I didn't throw a punch. I got up and reacted, then I just grabbed him," Acy said.

Acy received a flagrant foul 2 and was ejected from the game.

The league will review Acy's foul and may choose to fine or suspend him.

Larry Sanders has been suspended one game for pushing Nicolas Batum in the back as he elevated toward basket on Dec. 17, the NBA announced on Thursday.

The incident took place in the Portland Trail Blazers' win over the Milwaukee Bucks.