Isaiah Thomas received a 2 game suspension for entering the stands during the Washington Wizards' 125-108 loss at the Philadelphia 76ers.

Thomas confronted two fans over obscenities and gestures late in the 4th quarter.

The two fans were suspended from all Wells Fargo Center events for 12 months.

The NBA noted that the automatic suspension is intended to prevent altercations between players and fans, and thus enforced even when a situation does not escalate.

The National Basketball Players Association is appealing the suspension of Dion Waiters.

Waiters is under contract for $12.1 million this season and $12.7 million next season, on the final two years of the four-year, $52 million contract he signed in 2017.

Waiters was suspended by the Heat "for his failure to adhere to team policies, violation of team rules and continued insubordination."

The Miami Heat have suspended Dion Waiters six games without pay for his failure to adhere to team policies, violation of team rules and continued insubordination.

His suspension will begin immediately, and he will be eligible to return following the conclusion of the game against the Utah Jazz on December 23. 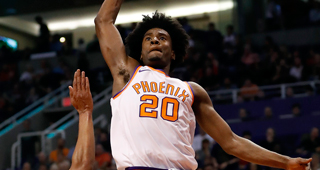 Taylor Jenkins didn't address whether the suspension would hurt Jackson's ability to make it back to the Grizzlies roster. Jackson is currently averaging 22.7 points per game with the Hustle.

"We're going to handle that internally. And we'll see what happens from here," said Jenkins.

The Oklahoma City Thunder has suspended guard Deonte Burton one game for conduct detrimental to the team.

Burton will serve his suspension tonight when the Thunder hosts the Minnesota Timberwolves.