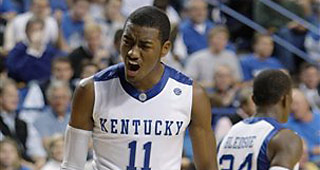 Like many basketball fans and NBA scouts and GMs, LeBron James has been very impressed with Kentucky freshman John Wall.

James was asked what specifically he likes about Wall's game.

"His speed with the ball. He's like [Chicago guard] Derrick Rose," James said. "Derrick is much stronger than he is, but he has some of the same athleticism that Derrick has and Coach Cal [Kentucky coach John Calipari] is going to let those type of guys play. He has shown why he came out being the top player in high school and is one of the top 5 players in college."