Change news category?
Gregg Popovich To Jayson Tatum: You Could Be Like Kawhi Leonard, Paul George

Jayson Tatum had the opportunity to play for Gregg Popovich for Team USA during the 2019 World Cup.

"Do you know how special you can be?" Popovich asked Tatum. "There are very few two-way players in our game, and you have the opportunity to be one of them. You could be like Kawhi [Leonard] and Paul George."

Tatum was so surprised by the comment that he initially didn't answer.

"I hope I haven't offended you," added Popovich. 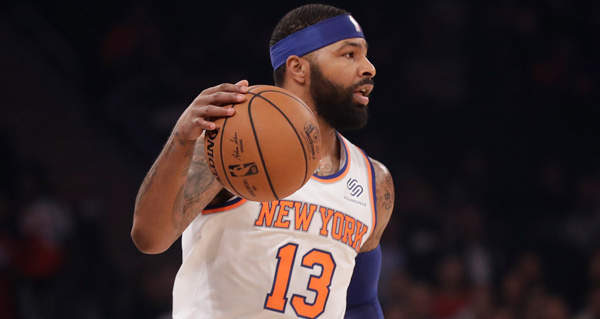 Elfrid Payton, Marcus Morris, and Jae Crowder were all ejected with 48 seconds left in the Memphis Grizzlies' 127-106 win over the New York Knicks.

Crowder attempted a 3-point shot with the Grizzlies up 124-106 in the game. Payton showed Crowder to the ground, resulting in both benches clearing.

Payton said he had no regrets over his actions.

"That shot was disrespectful. I'm standing on that. I'd a did it again. Doesn't matter who took that shot. Don't disrespect the game like that," said Payton.

Morris called out Crowder for being unprofessional following the game.

"He plays the game a different way. He's got a lot of female tendencies on the court, flopping and throwing his head back the entire game. It's a man's game and you just get tired of it. When you step back and shoot a 3 ... and like rub it in ... he's unprofessional. He's soft. His game is soft. He's very womanlike," said Morris.

Morris tweeted an apology for using the term "female tendencies."

Los Angeles Lakers players and coaches gathered for a light workout on Tuesday that turned into an impromptu storytelling session about their favorite memories of Kobe Bryant.

It was the first time that the team had met since Bryant's passing.

LeBron James recalled of story of Bryant knocking down Pau Gasol during a game between Team USA and Spain in the 2008 Olympics, according to a source. Dr. Judy Seto, the director of sports performance, said that it was a calculated move to get Gasol thinking of where he had to improve before joining the Lakers the following season.

The stories, seen as a "centering" moment, were the first step to a return to normalcy for the team.

"Everybody in the company has a Kobe story or their version of a Kobe story," a team source told Dave McMenamin of ESPN.

The conversation took place last week in Paris, where the Bucks beat the Hornets 116-103.

"When I was in Paris, I was talking to Michael about this and I said, 'Well, what do you think? I think we've got a real shot at doing what you guys have done [win 70 games]. This is a really unique team.' And he goes, 'Look, my advice to you is don't focus on beating our record, focus on winning a championship.' And I said, 'Wow, that's great. Thank you for that. Just so you know we're going to focus on beating your record and winning a championship.' I think we should do everything, but that's me," said Lasry of the conversation between him and Jordan.

Lasry joked that he wished the Bucks won 80 games this season.

"I was hoping we'd get to 80. ... I know everybody's happy at 70, but I was going for 80. When we ended up losing a couple more games, I was like, 'Damn.' But we'll see. I'm the wrong person to talk to because I actually think we're really good, we have all these capabilities, and what's actually unique about our team is how much it's a team."

Share Tweet Discuss Feedback
Moe Harkless To Change From No. 8 To No. 11 In Honor Of Kobe Bryant

Moe Harkless will swap his No. 8 jersey for No. 11 to honor Kobe Bryant.

Several NBA players have changed their number in Bryant's memory, informally retiring the No. 8 and No. 24 jersey.

Gordon Hayward took to Twitter to clear up a story about his lane violation late in the fourth quarter of Kobe Bryant's final game in 2016. The Lakers beat the Jazz 101-96 to close out the season.

Mike Tirico recalled Hayward intentionally stepping into the lane as Bryant shot his second free throw to potentially score his 60th point, ensuring that Bryant would get another free throw if he had missed.

"It has also come to my attention that there is a story going around tonight about an intentional lane violation that I took to ensure Kobe would get his 60th point in his final game and many are applauding me for the gesture. The fact of the matter is that is not true," tweeted Hayward, who finished with 17 points in the game.

Hayward added that he didn't give Bryant anything for free during the game.

"He got 60 on me and I didn't give him anything free all night. What happened on the free throw line was not intentional. Kobe would have lost respect for me if I gave him something free. That’s what made him so very special!" 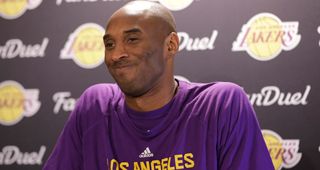 Prominent figures in Italian basketball reacted to the news of Kobe Bryant's death.

Bryant, who lived in Italy from the ages of 6 to 13, was fluent in Italian.

Bryant reportedly came close to signing with Virtus Bologna during the 2011 NBA lockout.

"He was a supernatural. To hear him speak and joke in our language and to remember when his father played here and he was a kid drew a lot of people to the NBA. He was also always very attentive to help Italian kids arriving in the NBA and to help them enter such a tough and competitive world. He also did that with me when I arrived at the Lakers and I'm still very grateful to him for that," said Messina, who worked with Bryant as a Lakers assistant coach.

"All of the NBA players are important because they're legends, but he's particularly important to us because he knew Italy so well, having lived in several cities here. He had a lot of Italian qualities," added Petrucci.

The Dallas Mavericks announced that they have retired the No. 24 jersey as a tribute to Kobe Bryant.

Bryant was killed in a helicopter crash on Sunday.

"Kobe's legacy transcends basketball, and our organization has decided that the number 24 will never be worn by a Dallas Maverick," issued Mark Cuban in a statement.

Quin Snyder and Rick Carlisle agreed that Rudy Gobert should make the All-Star team following the Utah Jazz's 112-107 win over the Dallas Mavericks.

"To be honest, to me, it's one of those things that's just self-evident. It's [about] the things that he does to help his team win," said Snyder.

Gobert finished the game with 22 points, 17 rebounds, and 5 blocks, including a late block to seal the game.

"Man, did you watch the game? That's him, on both ends. He's an All-Star, and I think nights like tonight show it," added Mitchell.

LeBron James passed Kobe Bryant for No. 3 on the NBA all-time scoring list during the Los Angeles Lakers' 108-91 loss to the Philadelphia 76ers.

"It doesn't make sense. Just to make a long story short, now I'm here in a Lakers uniform, in Philadelphia, where he's from. The first time I ever met him, gave me his shoes on All-Star Weekend. It's surreal. It doesn't make no sense, but the universe just puts things in your life. And I guess when you live in the right way, when you just give it everything to whatever you're doing, things happen organically," said James after the game.

James added that Bryant had zero flaws in his offensive game.

Kawhi Leonard On First Triple-Double Of Career: 'It's Just A Great Honor'

Luke Walton: Benching Buddy Hield Is 'Not A Permanent Thing'

Steph Curry Says He Wanted To Get Drafted By Knicks

Zion Williamson Ahead Of NBA Debut On Wednesday: 'This Is Business Now'

Mike D'Antoni After Fourth Straight Rockets' Loss: 'When It Rains, It Pours, And It's Pouring'

Marcus Smart After Hitting Celtics Record 11 3's: 'I'd Rather Have The Win Than The Record'

David Griffin: Finding Stasis With Zion Williamson Is The Challenge

Sean Marks: Nets Married To Being A Tax Team