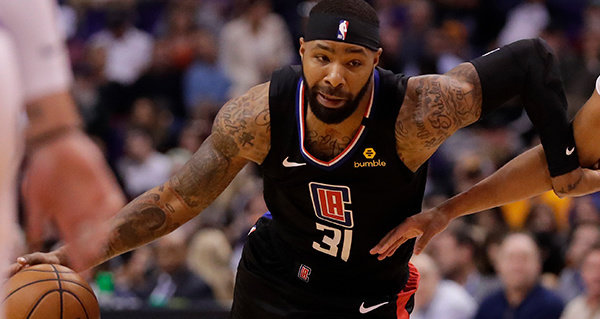 Marcus Morris reiterated that he was playing hard and not trying to hurt Luka Doncic following his ejection from the Los Angeles Clippers' 111-97 win over the Dallas Mavericks to close out the series.

Morris was called for a flagrant foul 2 and ejected from the game when he hit Doncic's head in the first quarter.

"They had to make that call. I think, honestly, we had a lot of back-and-forth this series. It was a hard-fought series. I just don't want people to mistake playing basketball, playing hard with trying to hurt somebody. I think Tim Hardaway had an extremely hard foul with [Paul George] last game, and it wasn't taken in [the same context]," said Morris after the game.

Morris added that he didn't think he would be suspended for game 1 of the next series.

Doncic didn't directly respond when asked if he thought Morris committed the flagrant on purpose.

Doncic finished the game with 38 points, 9 rebounds, and 9 assists.

"It was a terrible play. What can I say? It's two games in a row he did something like that. I really hoped the first game it wasn't on purpose, but looking back on the foul this game, you know what I think."

Nick Nurse pointed to several reasons, including a lack of rhythm, for the Toronto Raptors' 112-94 loss to the Boston Celtics in game 1.

"We really just weren't very good. We didn't make many shots. We didn't play with great composure. We didn't execute very well. It was a rough one today on a lot of fronts. I think that the actual X's and O's and the tactical part, we'll need to do better. But it wasn't a very good rhythm on the day for us," said Nurse.

Pascal Siakam finished with just 13 points on 5-of-16 shooting, and was called for three fouls in the first quarter.

Nurse said that the team will try to get Siakam involved on offense through a variety of ways in game 2.

"I think we'll always look at trying to get him involved in about all areas as opposed to as a player or a jump-shooter or a handler in the screen-and-roll or center in the screen-and-roll. I think we gotta mix it up and vary it, even some isolations on top, isos on the side. Hopefully get him involved in the transition game a little bit as well," said Nurse.

"Obviously it was one of those games, and I didn't play well, and we didn't really have a rhythm offensively. I don't think our defense was bad; we made some mistakes and stuff. But we just try to go back and watch the film, and just try to be better."

Dennis Schroder was fined $25,000 for his low blow on P.J. Tucker during Oklahoma City's game five loss to the Houston Rockets.

Tucker was also fined $25,000 for his role in the confrontation, in which he headbutted the back of Schroder's head.

The Rockets reportedly wanted the league to investigate Schroder's actions, and were upset that no action was taken after Chris Paul's low blow on Ben McLemore earlier in the series.

The Rockets lead the series 3-2.

Luka Doncic, Dorian Finney-Smith, Tim Hardaway Jr., and Trey Burke are all expected to play in game 6 for the Dallas Mavericks.

Kristaps Porzingis is out for the first round.

Patrick Beverley remains out for the Clippers due to a calf injury.

The Clippers are up 3-2 in the series.

Carmelo Anthony said he wanted to return to the Portland Trail Blazers next season following their season-ending loss to the Los Angeles Lakers in game 5.

"In my mind, I'll be right back in the fray of things when next season comes," said Anthony following the game.

Anthony, who finished the game with 27 points on 9-of-17 shooting in the loss, averaged 15.4 points and 6.3 rebounds on the season.

Anthony added that he feels he's found a home with the Blazers after being out of the league for over a year.

"I pray that it can be Portland, I think I found a home in Portland. ... I think you [media members] saw it, why this is a good fit for me. Whenever you find a situation that's comfortable and allows you to be who you are, you want to stay in that situation."

Kyle Lowry is available for game 1 of the Toronto Raptors' series against the Boston Celtics.

Lowry suffered a sprained ankle in game 4 against the Nets after stepping on Chris Chiozza's foot.

Lowry practiced on Saturday, with Nick Nurse observing that he "looked okay." 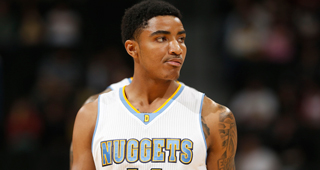 Garry Harris is planning on returning to the Denver Nuggets lineup for game 6, sources told Adrian Wojnarowski of ESPN.

Harris, who has been out the entire series due to a strained hip, has made "significant progress" in recent workouts.

The Jazz currently lead the series 3-2.

Dennis Schroder and P.J. Tucker were ejected in the third quarter of the Houston Rockets' 114-80 win over the Oklahoma City in game 5.

The Rockets took a 3-2 lead in the series.

The incident began with Schroder hitting Tucker during what was eventually deemed an illegal screen. Tucker would then headbutt the back of Schroder's head.

Schroder was given a Flagrant 2, while Tucker was called for a dead-ball technical foul with an ejection.

NBA security questioned Tucker after the game, according to sources.

The Rockets were upset that the league did not investigate Chris Paul's shot against Ben McLemore's groin in game 3.

The team also reportedly wants the league to investigate Schroder's shot against Tucker.

"First thing was, it was obviously an illegal screen. And it was kind of a bang-bang play. P.J. obviously after the play was over kind of head-butted Dennis, so they certainly had to eject him, and I didn't know if they felt like they needed to eject Dennis because they ejected P.J. But it was a very quick, aggressive play, and I understand with P.J. getting thrown out maybe they felt like Dennis needed to be thrown out," said Billy Donovan after the game.

Patrick Beverley has been upgraded from doubtful to questionable for game 6 against the Dallas Mavericks on Sunday.

Beverley has missed the last four games of the series with a strained calf.

The Clippers are currently up 3-2 against the Mavs.

Paul George said that the Los Angeles Clippers became closer as a team since players boycotted games on Wednesday.

"We had to spend two days of talking and having uncomfortable conversations. You know, you got to see different guys' points of view and different guys' interests, and there was just a lot laid out on the table that the whole team kind of talked about. We definitely got closer," said George.

The Clippers and Lakers both reportedly voted to not continue the season during a meeting on Wednesday, before ultimately deciding to finish the playoffs the following day.

Doc Rivers said that the entire league has grown closer since the boycott.

"I think every team is closer because of the last 48 hours. But I think what really is closer is just the players in general as a group ... when you see guys in the room that are talking that probably don't know each other ... I mean, there's some smart young players in this league," said Rivers.

George added that admitting he had been suffering through anxiety and depression in the bubble also helped create a bond between him and his peers.

"You know, whether I was the first to say it [inside the bubble] or not, we're all dealing with it. I've had conversations with guys here, and there's been a couple guys that is like, man, I'm happy I'm not the only one. I've been dealing with this, too. It's a thing in here. It's a brotherhood."

Russell Westbrook To Play In Game 5 Against Thunder

NBA Playoffs To Resume On Saturday With Games Postponed From Wednesday

Bucks Expected Strike To Be For One Game Counted As Loss

Lakers, Clippers Vote To End Season, Every Other Team Wishes To Continue

Kyle Lowry To Undergo MRI On Arch Of Left Foot

Luka Doncic to Play In Game 4 Against Clippers