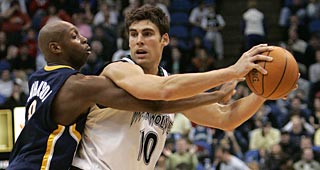 Timberwolves all-star Kevin Garnett clarified a few things about his relationship with Wally Szczerbiak in the wake of Thursday night's blockbuster deal that sent Szczerbiak to the Boston Celtics.

Garnett said he and Szczerbiak weren't best friends, but they weren't enemies.

The day after the struggling Wolves traded Szczerbiak for Ricky Davis as part of a seven-player deal, Garnett said he hated to see Szczerbiak go, despite a long-held perception that the two have stood in opposite corners for most of their 6? seasons together in Minnesota.

"We're two totally different people from two totally different parts of the earth," Garnett said Friday before Minnesota's game at Houston against the Rockets. "I think people are wanting it to be more than what it really was. It wasn't like we hated each other. We spoke every day, said what's up, had conversations, cracked jokes, just like any other teammate in here. Basketball-wise, came in, did what we had to do to get a win. Sometimes we didn't get it. We're both competitive."

The perceived rift between the players has been scrutinized since Garnett and Szczerbiak had a scuffle in the team's training room in November 2000.

But they coexisted amicably over the years. Garnett invited Szczerbiak to the U.S. Open tennis championship last summer in New York.

"I've never had (a) beef with World," Garnett said. "Personally, we were teammates. We understood that. I understood that. As the primary (option) on this team, I felt it was my responsibility to have the ball come through me, and I consolidated and distributed to everybody. I don't know if World was bothered by that."

Szczerbiak told the Associated Press that he did not believe the perceived problems between himself and Garnett prompted the trade.

"Who knows?" Szczerbiak said. "K.G. and I have been teammates for seven years. I've learned a lot from him. ? Now we're moving on and breaking apart."